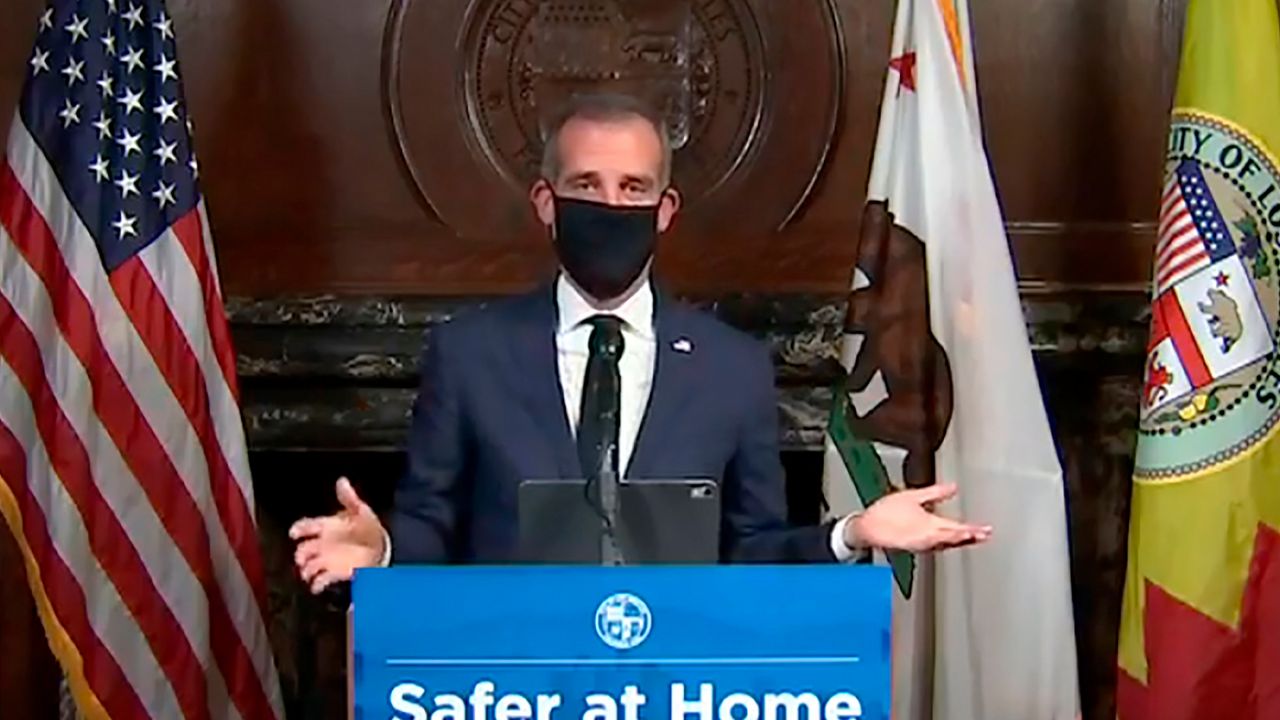 Mayor of LA: All City Decisions Are Made With Racial Equity in Mind

Weeks ago, Mayor of Los Angeles Eric Garcetti announced that he’d look for $100-150 million to cut from the L.A. Police Department budget. Garcetti said the Black Lives Matter protests, which erupted across the world in late May after the killing of George Floyd at the hands of four former Minneapolis police officers, inspired him to reallocate some funds from LAPD to other city departments.

“You cannot in a democracy see tens of thousands of your fellow people in the streets and feel in your own heart that something is sick and wrong in our society still with the seed of racism, and not do something about it. If we don’t stretch now, when will we?” he asked.

Mayor Garcetti said funds will be reallocated from more departments than just the LAPD.

“It's not just [LAPD that needs] to be punished. Everybody else is stretching to meet this moment,” he said. “How can we make sure that we rethink putting so much on the shoulders of our police officers, from mental health to homelessness, and aren’t there better, smarter ways for us to put that money into adjusting public safety that doesn’t have such a deleterious effect on communities of color?”

Mayor Garcetti said he planned to reduce LAPD by 100 officers even before the racial unrest.

“That may seem like a small number when there’s 10,000, but it was the biggest reduction of personnel of any department that we had,” he said. “It was something that we looked at because so often politicians in the past have fixated on, 'OK, let’s build up to this many thousand officers.’ But I’m more interested in the quality of policing and the amount of time that we spend doing the right sort of things. I want good and great policing, and good and great police officers.”

While law enforcement officers are trained to intervene in the most dangerous situations like taking people out of sex trafficking, solving rapes, and investigating violent crimes, Mayor Garcetti said officers don’t feel equipped to handle mental health and homeless crises.

“I think they are the first to say, ‘This isn’t what I'm trained for,’” he said.

Mayor Garcetti suggests modeling an emergency response system after Oakland, California, whose leaders are thinking about directing 9-1-1 calls to mental health professionals instead of police officers.

Mayor Garcetti said we’ve made some strides forward, but in order to keep working toward the goals of abolishing racism and achieving equality, he said we need to examine our past too.

“We are somewhere midway up the mountain. We have to look down, and too many people worked too hard, too many people died fighting for the rights that we were able to obtain, the changes we have made,” he said. “But, rightfully so, we’ve got to look up and see how far we still have to go, how far the peak is from us, and it will require us collectively, not just being happy and being in the middle of the mountain saying, ‘We’re there.’”

On Juneteenth, Mayor Garcetti wrote an executive directive to make racial equity a cornerstone value of all decisions made in Los Angeles.

“Every department will need to have a racial equity officer,” he said. “Brenda Shockley, [deputy mayor of economic opportunity], is the first city equity officer in our history. And they will have to come up with hiring plans, procurement plans, economic distribution policies where we look internally at our operations as well as externally. That’s how L.A. will lead.”

In the midst of protests and calls for action, the world is still battling the novel coronavirus, which has disproportionately impacted people of color.

“No matter how frustrated you feel, how tough it’s been being indoors, how much we've all suffered, our mental health, our connections with people we love… this is just as dangerous a virus as the day it started,” he said. “That said, we’re smarter now. We know the tools that can help beat this virus. We know how to prevent its spread.”

“Do not break the rules that are out there. Don't go together in big groups. Don't hang out in someone's backyard. Don't think just because you are statistically less likely to die that you can’t still be a killer,” he said. “My role is to use the three Es: educate, encourage, and occasionally enforce. We’ll never have enough resources for enforcement, nor do I want to turn Los Angeles into a police state. This is really kind of an honor system, and we have to continue to remind ourselves that we can be life savers or we can be life takers.

As Mayor Garcetti mentioned last month on This Month With the Mayor, he reiterated that “real men wear masks.”

"Real men wear masks."@MayorOfLA @ericgarcetti says wearing a mask, washing your hands, and staying physically distant from others are all essential measures for Angelenos to maintain as businesses begin reopening in L.A. pic.twitter.com/ahFujMCSwO

“Women are naturally just I think much more experienced in caretaking, and every day women make sacrifices for the health of their families and their communities, and maybe we're just less well-trained as men,” he said. “But men have to be caregivers, men have to be protectors. Men should be the ones who are also leading and ensuring that we don’t spread it. Because by the way, more men are dying of this than women. So think about it selfishly if you want to. Think about it selflessly if you want to. But think about it. Don’t go out there and do something stupid.”