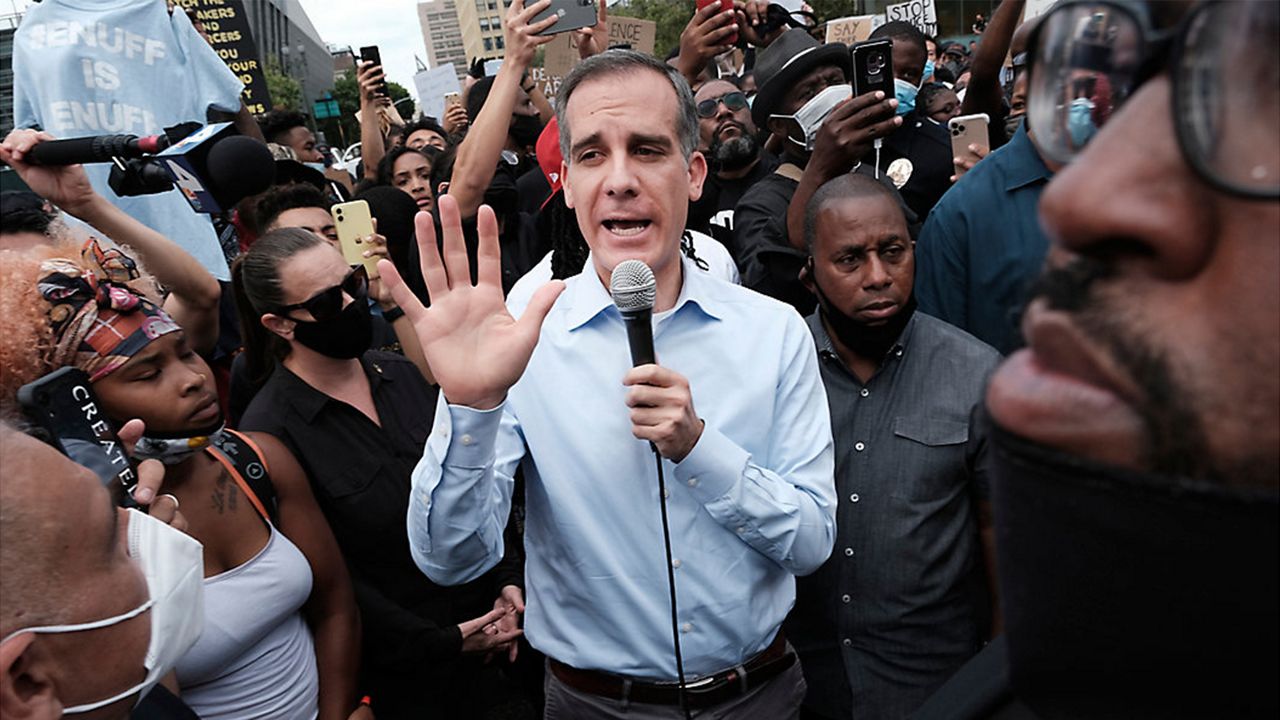 Once a month, Mayor of Los Angeles Eric Garcetti answers questions from Inside the Issues viewers.

Sal Macias asked, “What are his thoughts on the billions of taxpayer dollars that have been spent paying for police misconduct civil lawsuits?”

Mayor Garcetti responded, “A lot of people ask this all the time, you know why don’t we pay out of pocket for the department? And there are pieces that we’ve done, not just with the police department, but across our budget of shared responsibility. If you are a place with high lawsuits, whether it’s trips and falls, or whether it's police misconduct, that there are financial consequences in your budget.

“But second, we have to make sure too though that we can pay and people get justice, and a lot of times, that was an individual's responsibility. There wouldn't be enough money for people to get the right justice they deserve when there has been misconduct.

“And then third, to make cuts, I know for some it’d be great. I know there are some people who want to completely get rid of the police department. I’m not one of them. I want to have a good and a strong police department with great police officers who are protecting people from a guardian model. And I see so much of that every single day.

“I also see things every single day as Mayor of cases that worry me. We can’t just make cuts and then require people to be less safe. We’re relatively under-policed. There was a great article that was in the Washington Post in recent days about Vallejo, who went bankrupt and cut their department in half. Complaints of brutality went up. And one of the things that I’ve told friends who are saying, ‘Oh, let’s move away from policing,’ I say, ‘That’s an appropriate conversation to have, especially in areas where we put too much on the shoulders of police. But smaller departments are often much more brutal, much further stretched out.’ So it isn’t… be careful what you wish for. Having fewer resources in a department leads to much more abuse, leads to higher costs, leads to things. So the cuts I think should be shared, but the responsibility of good policing should also be shared.”

Mayor Garcetti responded, “I’ve used an equity lens as Mayor since the beginning of being Mayor, whether that’s gender equity, which we did an executive directive, or the more recent racial equity lens.

“I’m sick and tired of justice being something that a few people are responsible for instead of something that should be owned by every general manager, chief, and executive director of every department in Los Angeles. I’ve also tried to widen that out beyond just the city of Los Angeles... I’m very proud of the work we’ve done to reduce juvenile arrests by over 85 percent just in the last few years [and] boost our gang reduction and youth development programs by 50 percent. Those are all parts really of centering people's lives, especially Black lives, at the work of what we do.”

Mayor Garcetti wants to abolish Proposition 209, which says California “shall not discriminate against, or grant preferential treatment to, any individual or group on the basis of race, sex, color, ethnicity, or national origin in the operation of public employment, public education, or public contracting.” He believes Prop. 209 has “handcuffed us all, taken our ability away to move, to cure, and to invest in Black communities and brown communities with affirmative action.”

The Mayor is also working with L.A. City Councilman Marqueece Harris-Dawson to design a new system where police officers aren’t always the ones responding to 9-1-1 calls.

“We answer those 9-1-1 calls and resolve situations, and more importantly, we get long-term help for people who might be experiencing homelessness, mental health, addiction, and other problems that we see on our streets,” Mayor Garcetti said.

Mayor Garcetti said everyone must follow the rules to create a safer L.A.

Our Alex Cohen asked about the correlation between Juneteenth, the day that celebrates the emancipation of the final enslaved people in Texas in 1865, and the Fourth of July, the day that commemorates the Declaration of Independence of the United States in 1776.

“The one thing that links both of those holidays together is the idea of freedom, the idea of fighting against oppression and tyranny. As we know, when this country declared its independence, that was independence for some and not for all, but the idea of it planted a seed that was irreversible,” Mayor Garcetti said. “Every other American could claim, whether there was a woman who couldn’t vote, a slave who wasn’t free, an immigrant who was discriminated against, could say, ‘But you promised that this country was about that freedom and that equality and that ability to pursue the good life for everyone.’

“Juneteenth too has that same bittersweet quality. It was about freedom, but also about slaves who were the last to learn, almost two and a half years after the Emancipation Proclamation had freed the slaves, these were the last to find out, so it was a celebration of the final folks who knew, but then it launched an era of so many things that did not accomplish freedom: Jim Crow, segregation.

“So I think the 4th of July… we’ve been seeing a lot of fireworks going off. I’d ask people to please be safe and not use illegal fireworks on their streets. But we will not be able to gather this year. We won’t be able to look up and see just the pageantry of it, but I hope it’s a moment of reflection. I certainly will take it as a moment of reflection, saying, ‘Who are we America?’ We’ve called ourselves exceptional and the best always. Maybe this year has proven that we aren’t. Doesn’t mean that we can’t be though.

“We were unprepared for a pandemic. We don’t have a healthcare system that treats everybody equally. Our economic system let too many people fall through the cracks when this downturn came. And racism is still a cancer amongst us.

“But the 4th of July should be about our aspirations, not looking backwards, but looking forwards. What will American exceptionalism be? For me, it’s finally to bear the multi-racial democracy that has a fair economic system that isn’t so rigged. It’s been rigged for so many centuries against people depending on their color or their gender or their geography. If we want this chapter to mean something, let’s make America something that will finally represent all of us and celebrate the freedom that each one of us has.”