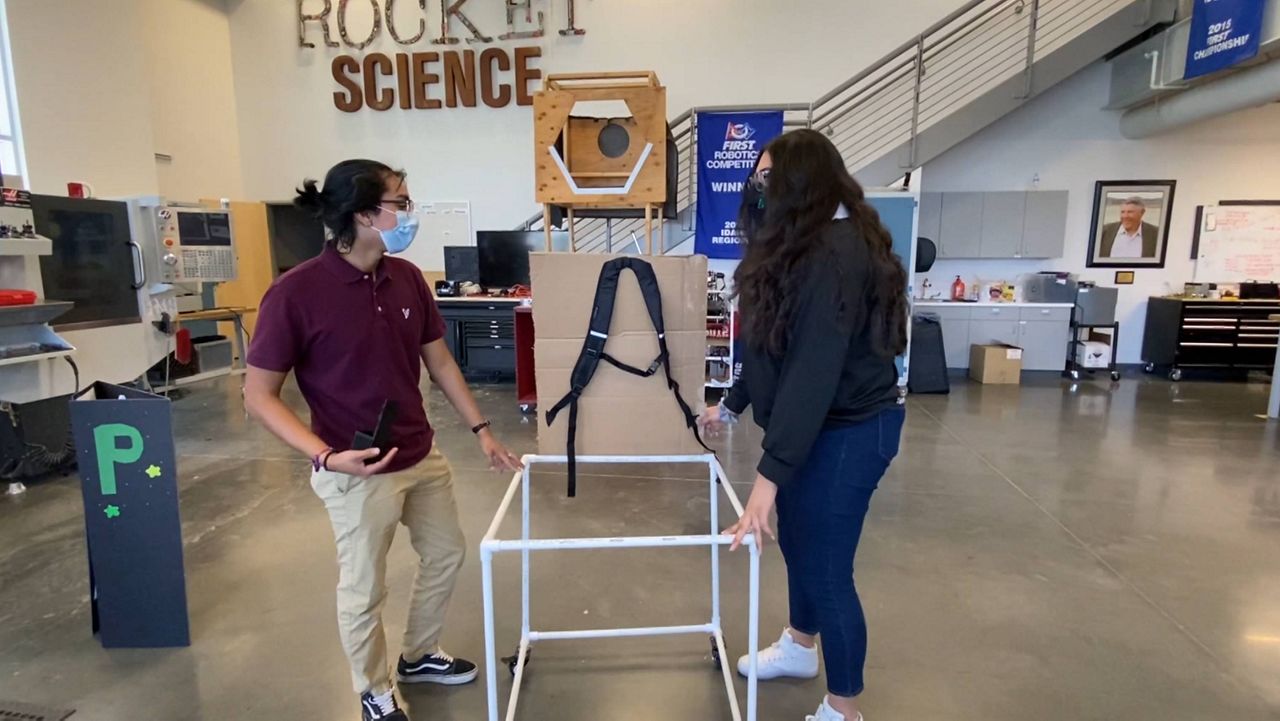 PALMDALE, Calif. — At first glance, Palmdale Aerospace Academy students Ricky Montano and Amara Osegueda are standing around what looks like a contraption made of cardboard, PVC pipe and straps, but to these 11th graders, it represents so much more.


"This is more of a chest strap, but it was supposed to represent like the waist strap that we wanted to keep the patient secure," Montano said as he points to different parts of the prototype, which is a walker designed for people who have cerebral palsy.

Montano said he was inspired after seeing two cousins grow up with the condition, which affects a person's ability to move.

"We normally take our walking ability for granted, people like her, they can't do much, and then my other cousin can kind of walk, but she's not exactly the best at walking, so she always has to be supervised, and it just kind of sucks," he said.

Montano, Osegueda and classmate Angie Barahona spent nine months meeting virtually, taking the idea from conception to reality. It is part of an engineering design and development class taught by STEM teacher Brian Martin, who has 24 years of teaching experience.

Osegueda said their prototype involved a lot of trial and error.

"We just made it happen, and even though it's like not in a great prototype, it's giving an idea of what it is supposed to be like," she said.

Martin said eight student teams came up with innovative ideas that included an alarm for unattended strollers and eco-friendly shoelaces. It prepares them for STEM careers; a talent much needed in the Antelope Valley.

"Our school has a partnership between the City of Palmdale and all of our local aerospace industry, Northrup, Lockheed, NASA, Edwards Air Force Base," he said. "They knew that 60% of the engineers were 50 and over. You know, there is a crisis in our country. There is two million high-knowledge, high-paying jobs that are unfilled by people in our own country and it's really a crisis."

Martin said 80% of students are college-bound, and many may even have jobs by the time they graduate high school. However, right now they are focused on presenting their prototypes to industry professionals for feedback in an annual showcase.

The exercise gives them a taste of the working world that awaits them. Osegueda plans to take the skills she has learned and work in healthcare or business. Montano is torn between aerospace and forensic science.