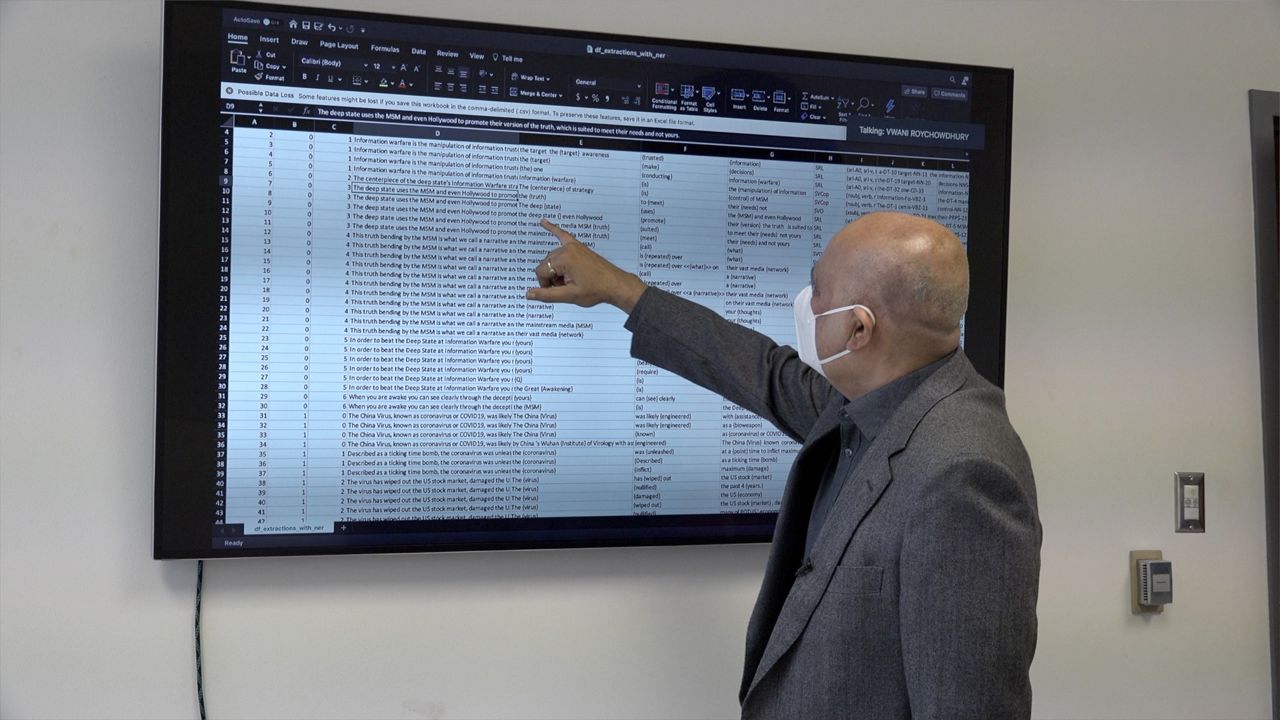 UCLA Professor Vwani Roychowdhury is a computer engineer who is studying conspiracy "theory" by looking at conspiracy "fact."

LOS ANGELES — George Boris has some interesting opinions about the origin of the COVID-19 virus. It was, he said, a conspiracy between the World Health Organization and a foreign power to undermine the Unites States by weaponizing the Corona virus.

"The Worlds Health Organization is run by a communist," explains Boris. "And they are in line with China." Moreover, he believes most of the tenured professors at American universities are communists too.

Boris' beliefs are what some people would label "conspiracy theories." Such theories are no longer fodder for your drunk uncle. Boris, for example, isn't what someone might call a "kook." He is highly educated and a board-certified plastic surgeon who owns a thriving practice.

Conspiracy theories no longer orbit amongst the "fringe elements" in society. They have spun into the center of social discourse. They are how tens of millions of people explain world events or rationalize their behavior. Conspiracy theories threaten to undermine democratic elections or may put an entire population at great risk because one theory or another explains why one shouldn't wear a mask or get a vaccine.

That's the question UCLA Professor Vwani Roychowdhury asked. He is a computer engineer who, along with his colleagues and doctoral students, are studying conspiracy "theory" by looking at conspiracy "fact" — how false narratives come to life, spread, and, then, create potential harm.

"Conspiracy theories are as old as humans. But it used to be restricted to office water coolers," explained Roychowdhury.

But when social media came along, conspiracy theories had the ability to rocket, literally, at the speed of light to all corners of the world. Roychowdhury and his associate Timothy Tangherlini, a folklorist, published a paper on how to root out the origins of conspiracy theory using artificial intelligence to “read” through millions and millions of social media posts.

Roychowdhury points to a large LED display on his office wall that is packed with social media posts all jumbled together, one after the other, without hardly a character space between them. He scrolls down the screen to reveal line after line embedded with comments and phrases about "UFOs" or "main stream media" or "QAnon" or "the Deep State." This is raw data that his team continuously vacuums from the internet. It's all too much for one person or even one computer to dig through. So Roychowdhury and his colleagues have harnessed the power of artificial intelligence to make sense of it all.

A program literally diagrams each sentence, and in the same way we were taught in English class — by subject, verb, object, and so on. The algorithm then sorts all of this in a way that computer scientists can see how this information is related and how narratives are created, some of which are true, some false

"So, conspiracy theories are basically naratives that are fictional," said Roychowdhury.

Most conspiracy theories have a kernel of truth in them.

As an example, he points to a widely shared conspiracy theory that "5G cell towers cause the COVID-19 virus." 5G is a new technology currently being rolled out by telecommunication giants that promises faster internet speeds for smartphones and other devices.

Thanks to AI, Roychowdhury can trace how this narrative came to be.

First, it is true that microwave radiation can easily damage biological cells. The power of a microwave oven, for example, is enough to harm or kill a small pet were someone cruel enough to place it in the oven. And, similarly, a person standing directly in front of a high-powered radar dish could be harmed. This is what Roychowdhury calls a "domain of knowledge." However, it is also true that scientific research has yet to prove 5G microwave radiation is powerful enough to be harmful to humans.

Then Roychowdhury points to a diagram with another domain of knowledge. And that knowledge is of a real threat to our existence — the COVID-19 virus. It is true, of course, that the virus can damage biological cells and kill humans. That's what many viruses do.

"Now comes the connection!" said the professor. Someone, somewhere on the internet made a spurious link between 5G cell towers and COVID. A narrative is created that says: 5G damages human cells so that the coronavirus is more lethal to those same cells.

"But," Roychowdhury said, "people have a need to make further sense of this."

Most conspiracies are rooted in a tribal "us" versus "them" narrative, where the "them" is often people who have wealth or power, and who are a threat to "us."

In this particular case, AI picked up social media posts that spoke about how Bill Gates, a wealthy and powerful person who advocates for vaccines to conquer disease around the world and to prevent pandemics. It is true how this has been one of Gates' missions for some time though is philanthropic work. This is yet another domain of knowledge.

And internet chatter also acknowledges another domain of knowledge based in truth: How powerful politicians or dictators around the world want to exert control over their subjects.

Following the "us-versus-them" dynamic, people on social media make the connection that people like Bill Gates push for 5G technology, so that it damages human cells, which increases the lethality of COVID-19, so Gates could then get rich by selling "us" his vaccine.

Likewise, there is social media discussion about how politicians want to encourage the adoption of 5G cell towers so that COVID is more lethal, so that those politicians can control "us."

Voila! An elaborate conspiracy theory is born! And it is repeated in echo chambers across the internet, by intelligent people who believe they have found what Roychowdhury calls "hidden knowledge." This is supposedly secret information that is only available to people in a particular internet group or "echo chamber."

A conspiracy like this moves so quickly and is easily adopted because it is seeded in some truth in the case about microwave radiation, nefarious world leaders, and disease. And although the overall conspiracy theory is false, it can have real life consequences.

Roychowdhury pointed to a headline on his computer: "Rumors linked to 5G and the corona virus, 'nutjobs' burn cell towers."

"The bigger harm might be," added Roychowdhury "is that we create a society that doesn't believe in science." For example, many people believe in a conspiracy theory that COVID-19 is a hoax. So [therefore] there is no reason to wear a facemask."

This puts a population at risk during a pandemic.

Roychowdhury hopes his research can pump the brakes on conspiracy theories. Like when twitter “flags” an untruth. Perhaps people could click on a link attached to a post to see all of these spurious connections for themselves.

Roychowdhury said this can lead to a meaningful discussion. "Why are people thinking this way? How can we help them? Or what are their grievances?"

"Our job [as conspiracy theory researchers] is to put up a mirror, and then we reflect it back to society."

And that mirror reflects a simple truth, humans are very capable of spreading untruths, and faster and farther than ever.