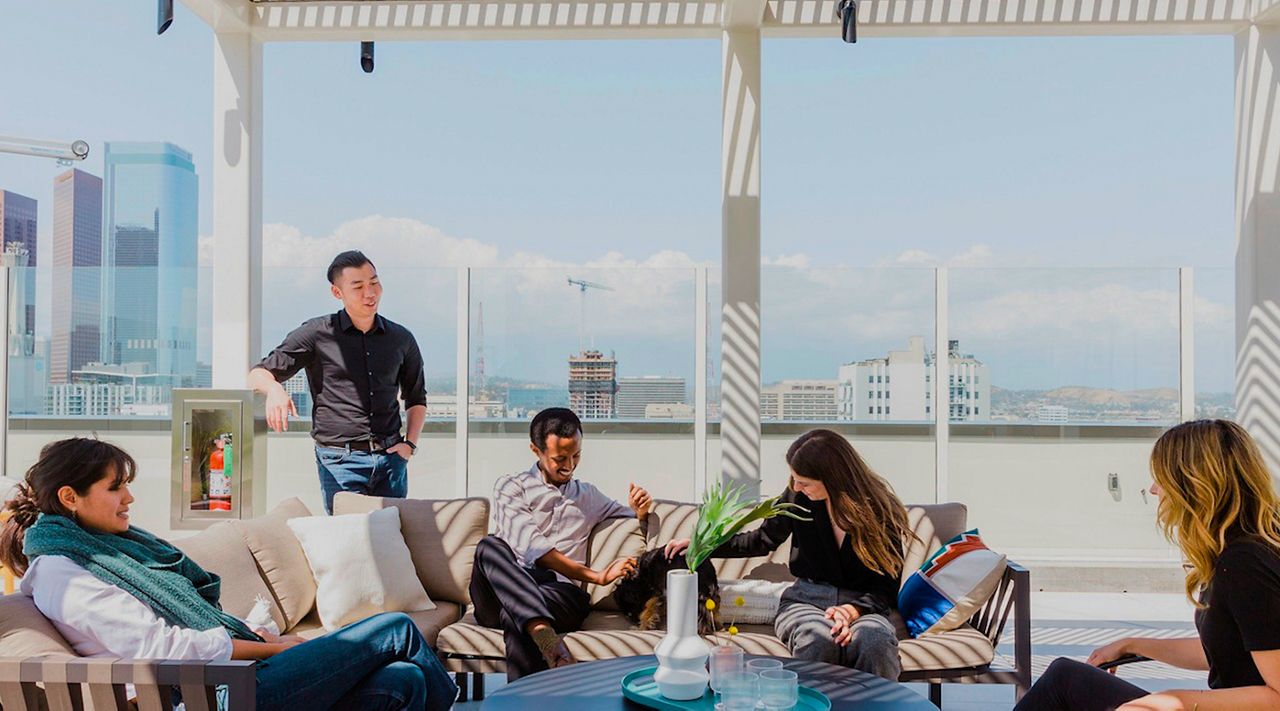 LOS ANGELES — The word omgivning is a Swedish word referring to the way a particular space or environment feels.

Karin Liljegren loves designing spaces, and used omgivning to name her architecture design firm, which she proudly based in Los Angeles.


“I just love the vitality here. You know, the people are just real,” Liljegren said. “We’ve got to bring downtown Los Angeles back, though, because it's in pretty sad shape right now.”

Under the pandemic, downtown Los Angeles, which had been experiencing a boom, is now seeing a dramatic slowdown as more people work from home. Liljegren, however, saw it as an opportunity to find solutions to long-held problematic issues of human interaction in urban spaces.

“The pandemic and social injustice and so many things all at the same time have made the direction we were going in so much more clear and with a real sense of urgency,” said Liljegren.

The Omgivning team recently released a three-part report, “Reimagining Spaces.” The report presents solutions to problems such as balancing public and private space at work, reconnecting our spaces to nature, and repurposing abandoned spaces for mixed and blended uses.

The report is filled with strategies and visual renderings that demonstrate how our existing spaces can be adapted for the times, keeping the human centered approach in mind.

“That means, as humans, how are we experiencing our spaces? Balancing our need for privacy as well as socialization, especially right now. And certainly, promoting equity and diversity through design,” explained Liljegren.

Part of Omgivning’s proposals includes repurposing commercial space into residential. The recent closure of retail chains like Toys “R” Us have left a huge number of unutilized spaces.

“There are 800 locations that are vacant and instead of tearing them down I think we need to just really think about how we can reuse them,” said Liljegren.

Liljegren explained that many of these ideas are not new, but under the pandemic are gaining momentum as many spaces are languishing, unused. Even when the pandemic lifts, many are going to continue to work from home, so companies will have to rethink their space requirements.

“You know, who's going to have [company space] that has a bunch of empty offices?” she said.

With less need for large company offices, the Omgivning team has proposed ideas for more mixed and blended spaces, which can cut costs and create benefits for companies that share physical space, much like a food court.

“[Companies] are getting the benefit of the collective of all being together,” Liljegren said. “You're sharing facilities. So, that idea that works really well with food halls or as a food concept can work in many other scenarios.”

Omgivning tends to focus on finding new uses for the old, which has been an integral part of the downtown Los Angeles renaissance in recent years. Karin Liljegren thinks this can carry into the future as well.

“Let's be inspirational and let's make change,” implores Liljegren. “Let's move forward and don't get hung up with how awful things are right now. Let's just all figure out how to make it better.”