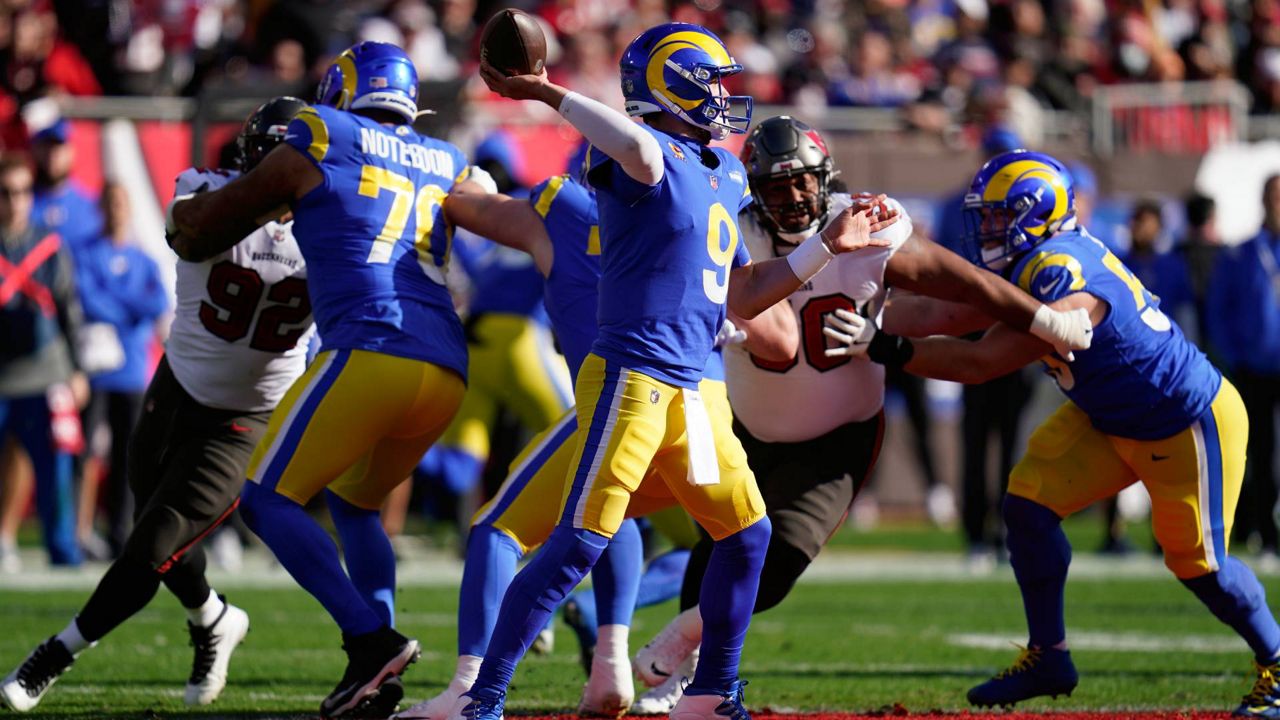 Los Angeles Rams quarterback Matthew Stafford (9) throws a pass against the Tampa Bay Buccaneers during the first half of an NFL divisional round playoff football game Sunday in Tampa, Fla. (AP Photo/John Raoux)

EDITOR'S NOTE: Multimedia journalist Kristen Lago spoke to dedicated Rams fans who traveled from SoCal to Tampa to watch Sunday's game. Click on the arrow to watch the video.

TAMPA, Fla. — The Los Angeles Rams defeated the Tampa Bay Buccaneers on Sunday, 30-27 to advance to the NFC Championship game where they will face division foe, the San Francisco 49ers, at SoFi Stadium on Sunday, Jan. 30, at 3:30 p.m.

The Rams have struggled recently against the 49ers, going 0-2 against their division rival during the regular season, most recently losing 27-24 in overtime in Week 18 at SoFi Stadium. Overall, LA has lost six in a row vs. San Francisco, dating back to October 2019.

The stadium officially opened on Sept. 13, 2020, when the Rams hosted the Dallas Cowboys, but no fans were in attendance due to restrictions caused by the coronavirus pandemic.

SoFi Stadium — which is also home to the NFL's Los Angeles Chargers — is the most expensive stadium ever built at an estimated cost of about $5.5 billion. It was built on the site of the former Hollywood Park racetrack, and sits adjacent to the Forum.

The Rams raced out to a 27-3 lead against the Buccaneers on Sunday, only to see Tampa Bay tie the game with under a minute left. But Rams quarterback Matthew Stafford connected with receiver Cooper Kupp on two long passes to set up kicker Matt Gay's game-winning field goal as time expired.

There was some speculation earlier this month that the league might pull the Super Bowl out of Los Angeles due to the local surge in COVID-19 cases driven by the omicron variant, but officials confirmed on Jan. 6 that the game would go ahead as planned.

Last week, coronavirus concerns led the Recording Academy to move the 64th Grammy Awards ceremony from downtown Los Angeles to Las Vegas, after this year's planned ceremony at Crypto.com Arena had already been postponed. But LA County Public Health Director Barbara Ferrer noted that the Grammys and similar events are held indoors, and a postponement was a reasonable step in light of the increased risk of disease transmission.

County Supervisor Holly Mitchell told reporters there was no logic in moving the game.

"This is an international pandemic. I'm not sure why it would make more sense to have it in Texas," she said.

But Mitchell said holding the event safely will be dependent on the people attending it.

"My plea is to all of those — local and those who will travel to Inglewood to SoFi Stadium for the Super Bowl — that you follow our health orders and that you mask," she said. "I would encourage people to get vaccinated and boosted before you come.

"We shouldn't assume that individual decisions don't have the greatest impact in the spread of this virus," she said. "... It's up to the individual to choose to stay masked through the entire game to keep themselves safe and everyone else."

SoFi Stadium is also scheduled to host college football's national championship game in January 2023, WrestleMania 39 in April 2023, and the opening and closing ceremonies, as well as soccer and archery events, for the 2028 Summer Olympics.

Super Bowl LVI could deliver as much as $477.5 million to the Los Angeles economy, including thousands of new job opportunities in the event-production and hospitality sector, plus major contracts for local businesses, according to projections released in October.

"This is going to be such an incredible infusion for our local businesses," Adam Burke, president and CEO of the Los Angeles Tourism & Convention Board, said on Jan. 13. "You go back to 2019, tourism has become one of the biggest drivers of our local economy, with over 544,000 Angelenos employed in tourism-related careers, and believe it or not, in 2019 visitors generated $38 billion for our local businesses."