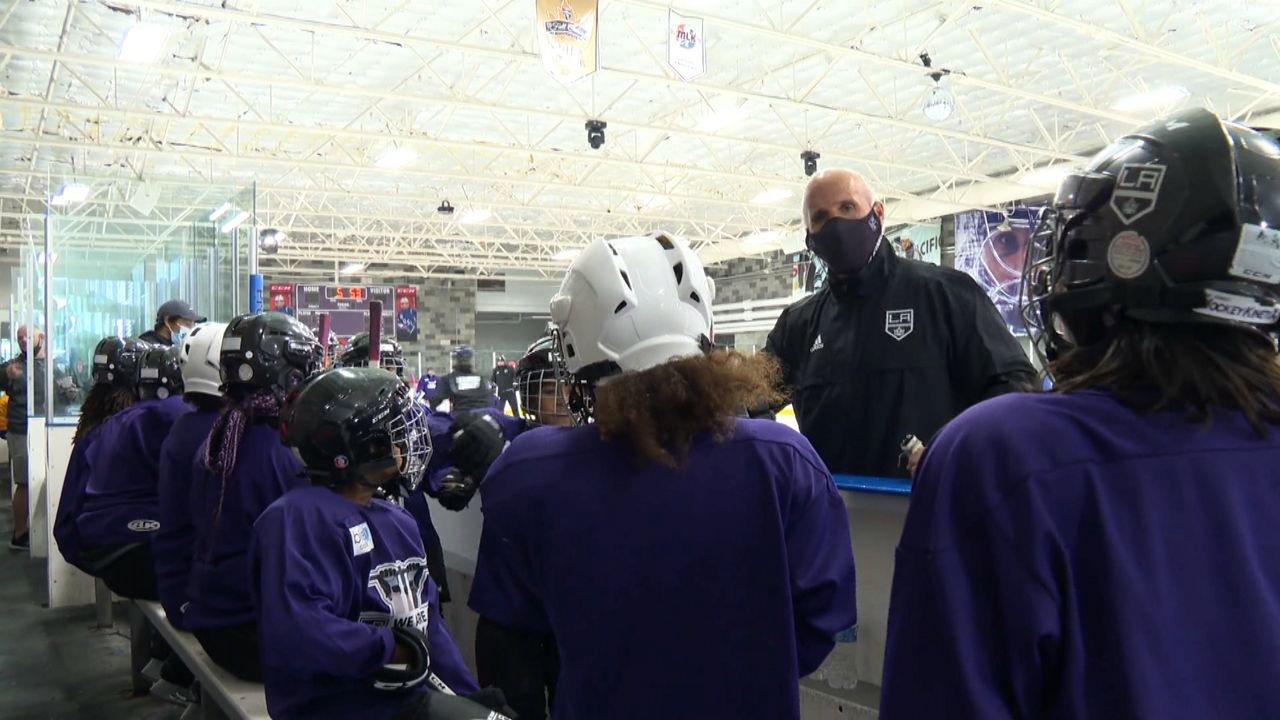 We Are All Kings Camp focuses on inclusion, diversity in youth hockey

EL SEGUNDO, Calif. — Lacing up his skates and putting on his helmet brought a unique rush to 13-year-old Jose Gutierrez.

“When I have my helmet on it makes me have an adrenaline rush and a bunch of happiness,” said Jose.


The young skater took a chance on the ice when he was about 4 years old, falling in love with watching and playing the sport of hockey. But what Jose learned quickly is that there are not many people to watch in the rink who actually look like him.

“Honestly, you can’t really see because of the helmets," he said with a laugh. "But with hockey, there’s not a lot of Hispanics playing.”

In fact, there are not many minorities playing the sport as a whole, especially at the professional level in the National Hockey League. As of 2020, just over 5% of NHL players were Black or people of color, according to report cards from The Institute for Diversity and Ethics in Sport.

It's a statistic that Courtney Ports, the Los Angeles Kings' manager of hockey development, says has pushed teams to start thinking differently about how they promote the game.

“This camp is different," Ports said. "It’s a community focus and about getting the game into the hands of kids who may not have had the opportunity before.”

This summer, the Kings launched their inaugural We Are All Kings Camp, which brought together 30 kids — such as Gutierrez — to the Toyota Sports Performance Center to learn the fundamentals of the game.

While the group typically hosts camps for the development of higher-level hockey skills, Ports said this camp — run by Blake Bolden, the team's scout as well as its growth and inclusion specialist — was meant to introduce the sport in a fun, more tangible way.

By emphasizing the fun on the ice, the hope was to make hockey more accessible for all.

"For us, it was a goal to prove hockey is for anyone, wherever you’re from or where you grow up," Ports said. "There should be no limitations for anyone."


It's something that was important to the Kings, the kids and parents such as Kristen Agnew, who brought her young son Sterling to the camp.

"When I was growing up, there were hardly any people of color on the ice," said Agnew. "So it’s nice for him to have community here."

Agnew's belief is that the diversity of LA should be totally reflected in its sports programs and teams. And while for young kids like Sterling, it was more about learning small lessons, such as "always getting back up when you fall," for Jose, he left with a much bigger perspective.

"If everybody were to join in, everyone would forget it’s only one color that’s been playing more," Jose said. "We'd all have a lot more fun."

This year's We Are All Kings Camp was the first of many bringing access to kids who could one day help shape diversity and inclusion on the ice.