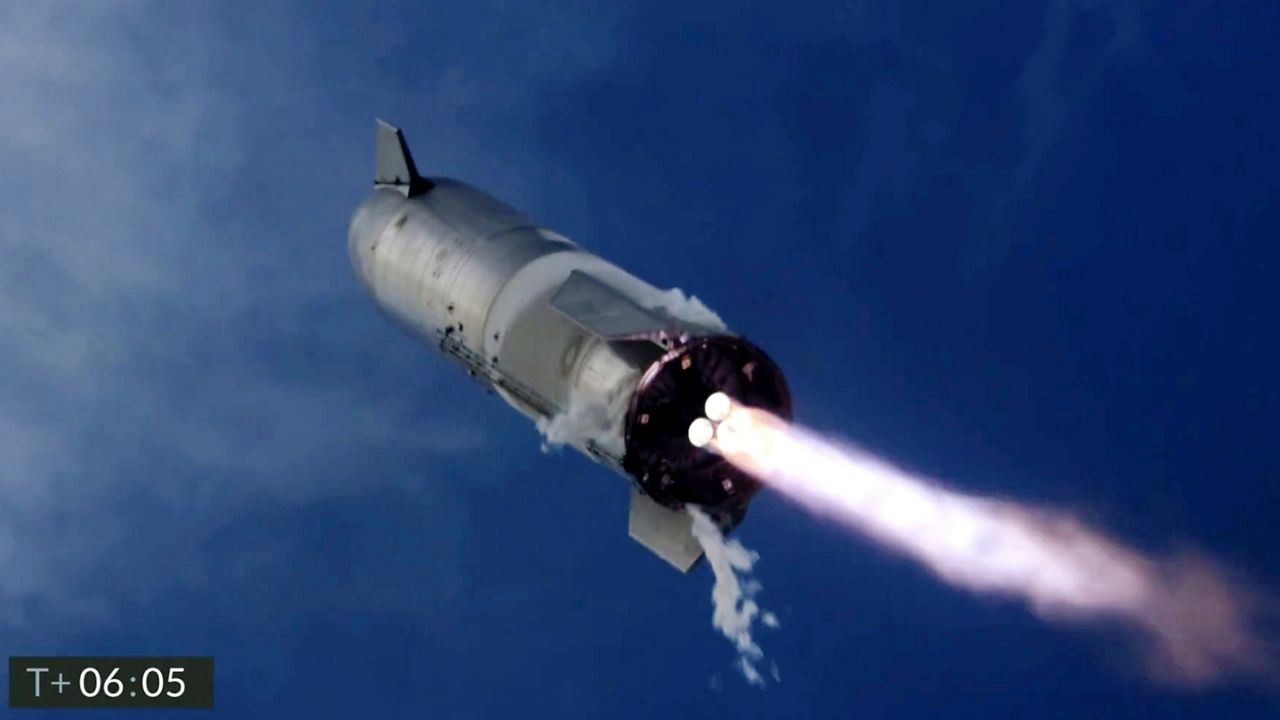 In this image from video made available by SpaceX, one of the company’s Starship prototypes fires its thrusters as it lands during a test in Boca Chica, Texas, on Wednesday, March 3, 2021. The two previous attempts ended in explosions. (SpaceX via AP)

Has space tourism arrived? Experts say not so fast

EDITOR'S NOTE: To watch the video report that accompanies this story, click the arrow above.

For more than 15 years, Mark Gonzales has been inching his way along in stand-up comedy, a brutal industry of late nights, harsh crowds and sometimes spotty paydays.

So when the funny man heard about a chance to become a space tourist, he applied. That kind of opportunity might boost his profile and satisfy a childhood itch.

His career took a step back after his tour companion, the famed Ralphie May, died on the road.

“There were two lives lost that day — Ralphie and my career,” he said with a laugh.

Gonzales, 37, applied for one of eight seats on the as yet incomplete SpaceX Starship with a planned 2023 charter by Japanese billionaire Yusaku Maezawa.

Whether Gonzales gets selected will be announced in the coming weeks. But whether it opens a door to a long-awaited space tourism industry is another question.

“It really is too soon to predict. Too many ‘ifs’ remain that may take years to answer,” said Henry Hertzfeld, director of the Space Policy Institute at George Washington University.

While Maezawa and SpaceX CEO Elon Musk have done interviews and issued promotional videos, the mission is a long way off.

Space launches are notorious for delays, even with proven launch vehicles. Starship still has safety milestones to pass.

Should the civilian crew blast off, it will be, in some ways, the soft opening for space tourism. Musk and Richard Branson’s Virgin Galactic have long had designs on tapping into such a market. Even startups emerged with colorful spacecraft names, including one in Mojave, Calif., which had designed a “space Corvette.”

More often than not, these grand designs have run up against the reality of an immature market, evaporated development funding and no destinations to take prospective customers.

Branson’s SpaceShipTwo has been preparing to take people on suborbital trips for a brief ride in microgravity. Setbacks, including a high-profile explosion in which a test pilot died, have set Branson back time and again. And questions remain about who exactly would pay for the honor of such a trip and how much it would cost.

SpaceX’s goals have always been more ambitious. Musk’s stated plan from the outset has been to colonize Mars.

Once, space tourism looked like a possibility to fund his bigger ideas, like dozens of launches of the Falcon 9 rocket each year. But Musk has already achieved many of his bigger goals and plowed into markets with huge financial upside. He brought in a $1 billion investment from Google in 2016, filed a lawsuit to horn in on lucrative contracts to launch military satellites and jumped into the internet business. And with a recent $2.9 billion NASA contract to return to the moon, he’s inching closer to more difficult and lucrative opportunities.

Adding a space tourism business to his already voluminous portfolio could be more of a distraction than financial boon, one analyst said.

“It’s really not on the radar screen, and it’s really not taking off like I thought it would three or four years ago,” said Marco Caceres, an aerospace industry analyst for Teal Group Corp. “Once you’ve been hired to be NASA’s taxi to the space station, you don’t get better publicity taking tourists to space.”

While a launch of civilians to the moon would undoubtedly grab headlines, a lot has to happen for the mission to launch in 2023. Starship has already blown up in testing, often a routine step in development for launch vehicles. Still, Starship needs further testing before it can carry human cargo.

Caceres said launching civilians into space could backfire. If any are hurt or killed, that would be adverse publicity — bad enough to harm his relationship with NASA, a far more important ally than glitzy, celebrity spaceflights.

Another barrier to space tourism is the frequency of flights. Caceres said it’s hard to imagine annual trips to space accumulating the kind of momentum required to build an industry. An additional risk is the highly complex and dangerous nature of rocket launches. The first American civilian selected to take flight in space, high school teacher Christa McAuliffe, was tragically killed in the 1986 Challenger explosion.

What space tourism may need is more affordable rides on a monthly basis with more to do in space than a short trip through weightlessness.

Numerous variables remain with only a few answers.

For Gonzales, potential danger isn’t the first thing on his mind.