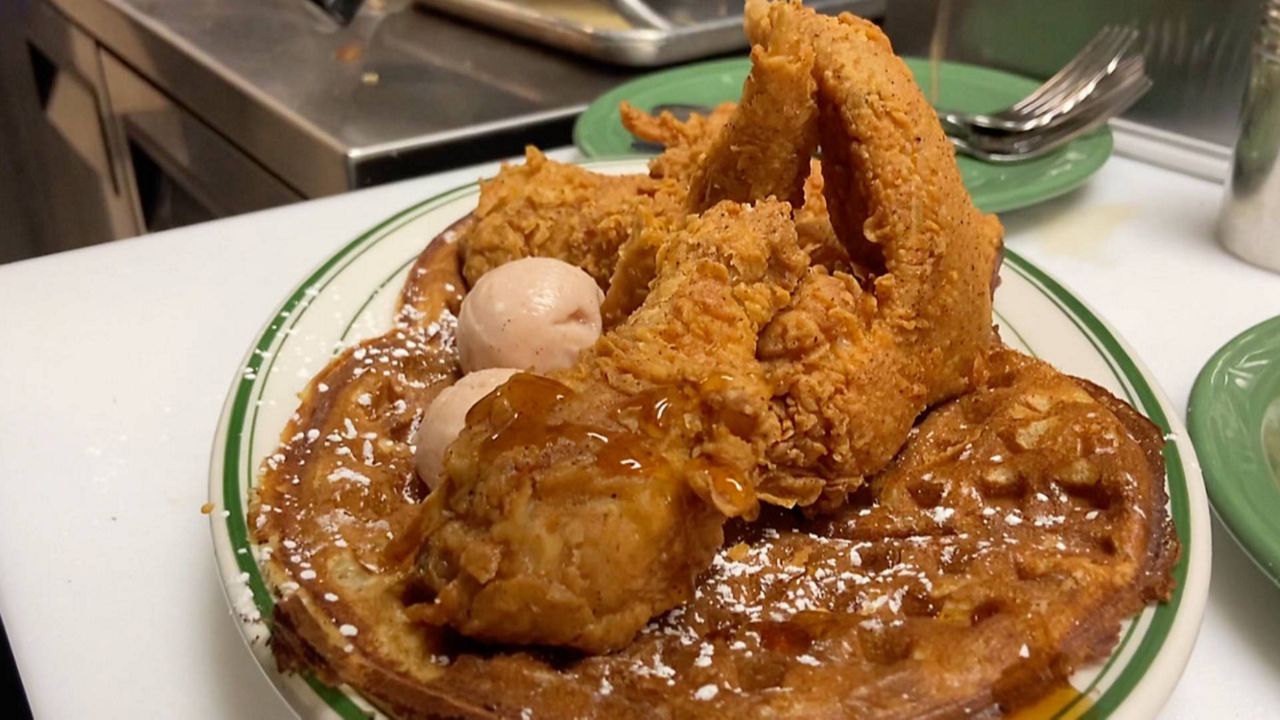 LOS ANGELES — While pounds of chicken wings and thighs are frying in the back, Kevin Johnson is out front in the new LA location of his restaurant Fixins Soul Kitchen.

Johnson curated all the artwork with a local artist to represent iconic brands like Oscar Meyer, Alabama Sweet Tea and Nilla Wafers.

"It’s nostalgic and something important to the African American community," he said.

To add to the decor are the basketball plant holders.

“You can’t just do a Lakers plant holder," Johnson said. "You have to find a place for the Clippers one too. We don’t want to discriminate. So we have a Clippers one here as well.”

They have to be fair because Fixins is right across from the home of the Lakers and Clippers at LA Live. Johnson is a former Phoenix Suns player whose final game in the NBA was at Staples Center against the Lakers in May of 2000.

“My top two teams are the Phoenix Suns and the Sacramento Kings, but after that, I’m happy to root for the Lakers and Clippers, as long as they aren’t playing one of those two teams,” Johnson said with a laugh.

It's only fair, especially since it's where Shaquille O'Neal's restaurant used to be. They even have his special seat waiting for him to return, which is much larger than a normal one. Of course, it’s all fun and games on and off the court.

"He gave us a big assist," Johnson said. "He put a lot of effort and energy into this space. For people who say he didn’t pass the basketball, he did here."

It truly came full circle because the idea for Fixins came while Johnson traveled the country for games. He would try all the soul food restaurants and knew he wanted to offer an elevated experience to honor his family’s southern roots and serve exorbitant amounts of Kool Aid.

After Johnson's basketball career was over and his time as the mayor of Sacramento ended too, restaurant owner was next on his list. He opened the first location of Fixins in his childhood neighborhood of Oak Park, Sacramento offering his grandmother’s recipes from Oklahoma and Texas.

"So to be able to have grandma taste her own peach cobbler and give us a thumbs up ... it's making me emotional," he said.


Chef Nikki Littlejohn helped create the dishes up north and is now down in LA to curate the menu for a wider audience. The restaurant serves bigger crowds, since it’s in a tourist destination. As she whipped up her Cajun version of shrimp and grits, she said she is grateful to be here.

“It’s stuff I grew up eating, so it’s nice to be able to come back and cook it. To be around it on the regular, it’s cool. I like it,” she said.

While they may have to crank out more orders, the flavor and quality is never compromised. Everything is fresh and made to order including fried deviled eggs, the special peach cobbler from Kevin’s grandma and of course fried chicken and waffles.

“We brine our chicken overnight, 24 hours, so it's got that crispy outside, and still got a nice, juicy, tender, you know, on the inside. So it’s moist, fresh. It's good stuff,” Littlejohn said.

Have a taste of the south before or after a game at Fixins located in LA Live at 800 W Olympic Blvd. A150, in LA.