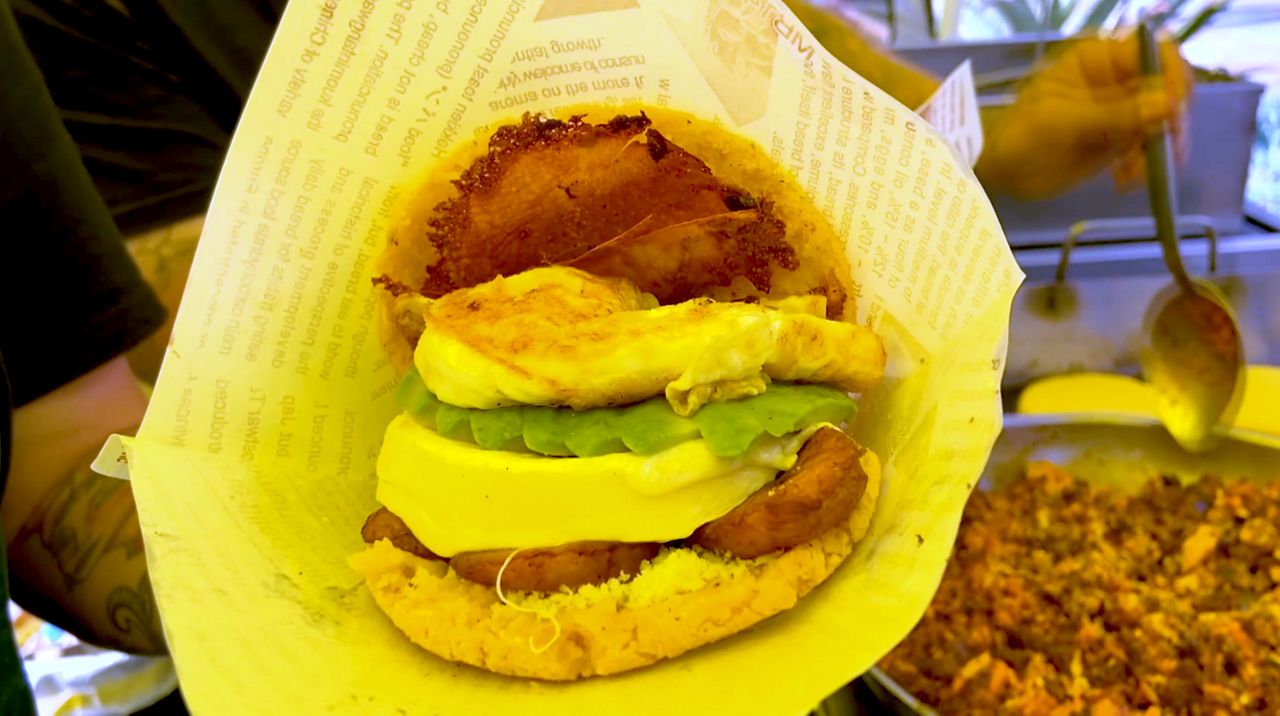 Get Venezuelan Street Food with LA Vibes at The Arepa Stand

PLAYA VISTA, Calif. — The Arepa Stand is a pop-up food stall that sells traditional Venezuelan cuisine with a twist at farmer's markets around L.A., like the one that takes place in Playa Vista on Saturdays.

Mercedes Rojas, chef and owner of The Arepa Stand, said business is good these days and thankfully has help from family members and friends.

Rojas' brother Zeus is also a co-founder and lends a helping hand, along with their mom. They actually moved her from Miami to help with the growing business. She is integral in Rojas' love for arepas and would make them every morning in Venezuela when Rojas was a child.

"It’s what they send you off to school with for your lunch," said Rojas. "It’s kind of our bread, and every household has it."

The arepa is a corn pocket made from masa that is stuffed with various ingredients. Rojas noted that some traditional options are brisket, cheese, and chicken salad.

“It is casual, but you are able to put so many twists into it but still keep it wholesome,” said Rojas, who makes them her own by adding twists from her high-end chef training.

She moved to Los Angeles in 2015 to learn under chef Suzanne Goin. Then Rojas opened The Arepa Stand in 2019 when she was out of work after frequently making arepas as a staff meal. She knew this would be her path.

“It’s very close to my heart, so it was a no-brainer for me to start something like this,” said Rojas.

On her first day selling at a farmer’s market, Rojas said she hoped to serve even just 20 arepas, not expecting what would come next.

“We ended up selling 160 of them, and my friends who came to buy arepas ended up in the booth working because it was so crazy. I think it was just meant to be. Everyone gathered together to help us accomplish this dream,” said Rojas.

That dream is blending her childhood upbringing with her new life in L.A. Rojas and her brother combine traditional Venezuelan staples with California ingredients. Even the names are an ode to Los Angeles. Zeus created titles like “The Westsider,” which is the chicken salad and avocado arepa, and “The 405,” which has beans and brisket.

“It is a mess to eat. It’s delicious, but if you get on the 405 any time of day, it’s a disaster. That’s why it’s named like that,” explained Rojas.

Even with the local flair, Rojas wants those from Venezuela to feel like their grandmother made these arepas. The Arepa Stand is only open on weekends at farmers’ markets, breweries, and cafes around the city.

“It’s something that people are excited to come for on the weekend. It’s arepa Saturday or it’s arepa Sunday,” said Rojas.

If you want to enjoye arepa Saturday or Sunday with The Arepa Stand, check locations and times posted on @TheArepaStand on Instagram.