When protesters tied a rope around the neck of a Junipero Serra statue and pulled it off its pedestal in downtown L.A.’s Placita Olvera over the weekend, it touched off a firestorm about how to honor his legacy. Serra has become a target in recent days as Californians continue to protest racial injustice, toppling his monument in Golden Gate Park and drawing protests at Ventura City Hall.

The 18th century Spanish Catholic priest is credited with founding the state’s mission system that gave birth to some of California’s most populous cities but resulted in many indigenous peoples losing their culture as well as their lives. Today, his legacy remains in the form of 21 missions and in statues located in Mission Hills, San Gabriel, and Ventura, as well as schools, libraries – even a museum – that bear his name.

“All of us in society have a history that looks very ugly in terms of contemporary values, so this is what’s happening with Junipero Serra,” said Gary Orfield, co-director of the Civil Rights Project at the University of California, Los Angeles. “He was a person of his time, and it was an ugly time in lots of ways.”

Serra was part of the Spanish Inquisition’s attempts to establish colonial settlements in California at a time when the Russian, British, and American governments were all vying to gain control. He did so by building Catholic churches, or missions, that were intended to convert Native Americans to the faith and also forced Indian labor to build them. Between 1769 and 1782, Serra built the first nine of the missions that now stretch from San Diego to Sonoma, roughly every 30 miles. 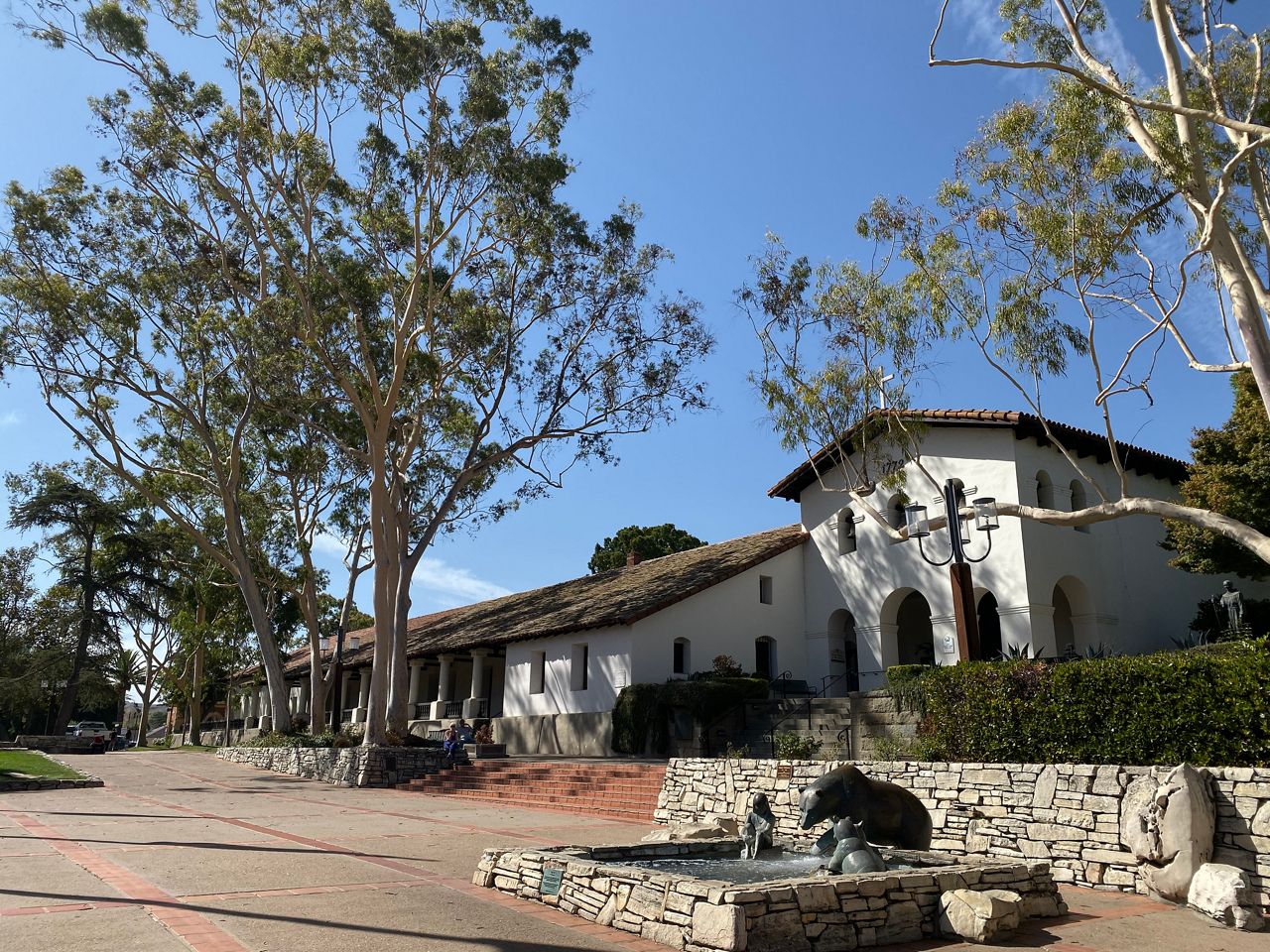 “Hurts and even bad things happened because of the Mission system,” acknowledged Father Tom Elewault, pastor at the Buenaventura Mission in Ventura, the ninth and final of the churches Serra built. About 3,600 of the 55,000 indigenous peoples who died during the Mission era are buried at Buenaventura, “but the intent wasn’t to exterminate them,” Elewault said. “When someone says Serra was Hitler or that the missions were concentration camps, nothing could be further from the truth.”

The Mission era lasted until 1833 and is often conflated with the 60 years that followed it – the Mexican uprising that overthrew the Spaniards, the Gold Rush, and the early days of American aggression in California, when 223,000 indigenous people died in California.

Scapegoating Junipero Serra, Elewault said, is not the answer. “Let the true history, all facets, be known,” said Elewault, who is working with Chumash Indian elders and the city of Ventura to relocate the Serra statue outside city hall that protesters threatened to topple over the weekend. 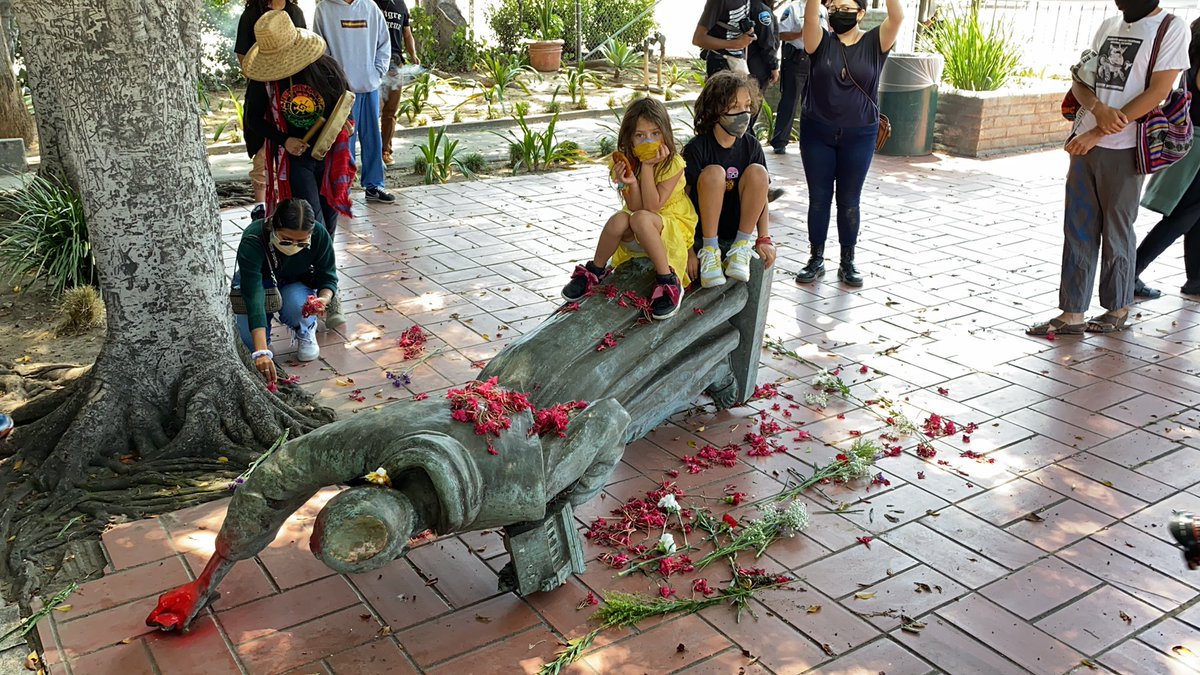 Tribal chair of the Barbareño/Ventureño Band of Mission Indians, Chumash elder Julie Tumamait Stenslie, said her tribe is not in favor of tearing down the Serra statue but relocating it.

During the Mission era, “We had no say in those days. We were forced to be obedient, and if not, we suffered the consequences of violence. Our voices were stifled, our language was forbidden, and our freedom. We could not leave,” she said.

But today is different. It’s possible to have an open dialogue for people to share their grievances about why the statue is no longer appropriate to be in a public space, she said.

“It is time because the world, not just us, not just Ventura, is angry,” she said. “The world is angry because of what has happened with racial injustice right now, so hopefully instead of moving in anger they can move to resolve the conflict.”

On Monday, the California Catholic Conference of Bishops issued a statement about the removal of Serra statues in the state, saying it “vigorously and wholeheartedly” supports a national and peaceful path toward eliminating racism against African American and Native American communities.

“During the past week, the specific question of removing statues of political, military, and cultural leaders of the past has gained momentum,” the statement read. “If this process is to be truly effective as a remedy for racism, it must discern carefully the entire contribution that the historical figure in question made to American life, especially in advancing the rights of marginalized peoples.”

In a separate statement, San Francisco Archbishop Salvatore Joseph Cordileone pointed to Serra’s efforts to protect California’s indigenous people from Spanish conquerors by walking with a bad leg to Mexico City to obtain an order from the Viceroy of Spain to discipline the military who were abusing the Indians, after which he walked all the way back to California.

“Every historical figure from our nation’s past will have to be removed for their failings measured in light of today’s standards,” the statement concluded.

Already, California’s Catholic Bishops are trying to set the record straight about the Mission era, working with Chumash elders to vet a curriculum for its schools that is more cohesive and authentic to what actually happened.

That’s already happening in public schools. In 2016, the California Board of Education resolved to repeal, replace, and reframe the 4th grade mission project that, for decades, had elementary school students building miniature replicas of California’s Spanish colonial missions. State leaders acknowledged the project was insensitive and “offensive to many” since “missions were sites of conflict, conquest, and forced labor.”

Yet today, all 21 of the state’s missions are designated California Historical Landmarks that are tourist attractions as well as functioning churches. Buenaventura Mission, for example, holds mass, performs weddings and baptisms, and is also an active member of the local charitable community, helping to provide meals to those in need.

The recent toppling of Junipero Serra statues in Los Angeles and San Francisco’s Golden Gate Park are merely the latest in a long string of attempts to bring down the larger-than-life symbols of racial injustice in the United States. In the early days of the George Floyd protests, a statue of Confederate general Robert E. Lee was toppled in Montgomery, Alabama, and another Lee statue was covered in graffiti in Richmond, Virginia.

On Monday, protesters in Washington, D.C., attempted to take down a statue of Andrew Jackson. A former U.S. Army general and seventh president of the United States, he was a slave owner who forcefully cleared Cherokee Indians from vast swaths of the south to cultivate more land for slave plantations.

Orfield points out that most of the country’s founding fathers were slave holders.

“Should we dishonor all the good things that they did or treat them as they’d be treated if they were trying to do them today? How should we think about this?” Orfield said.

“If we purge our history, not much is going to be left standing. The early history of California was totally racist: anti-Asian, anti-Mexican, full of violence, and it’s not so hot today in lots of respects. So, how do we think about this? That’s a question we’re having to explore now.”