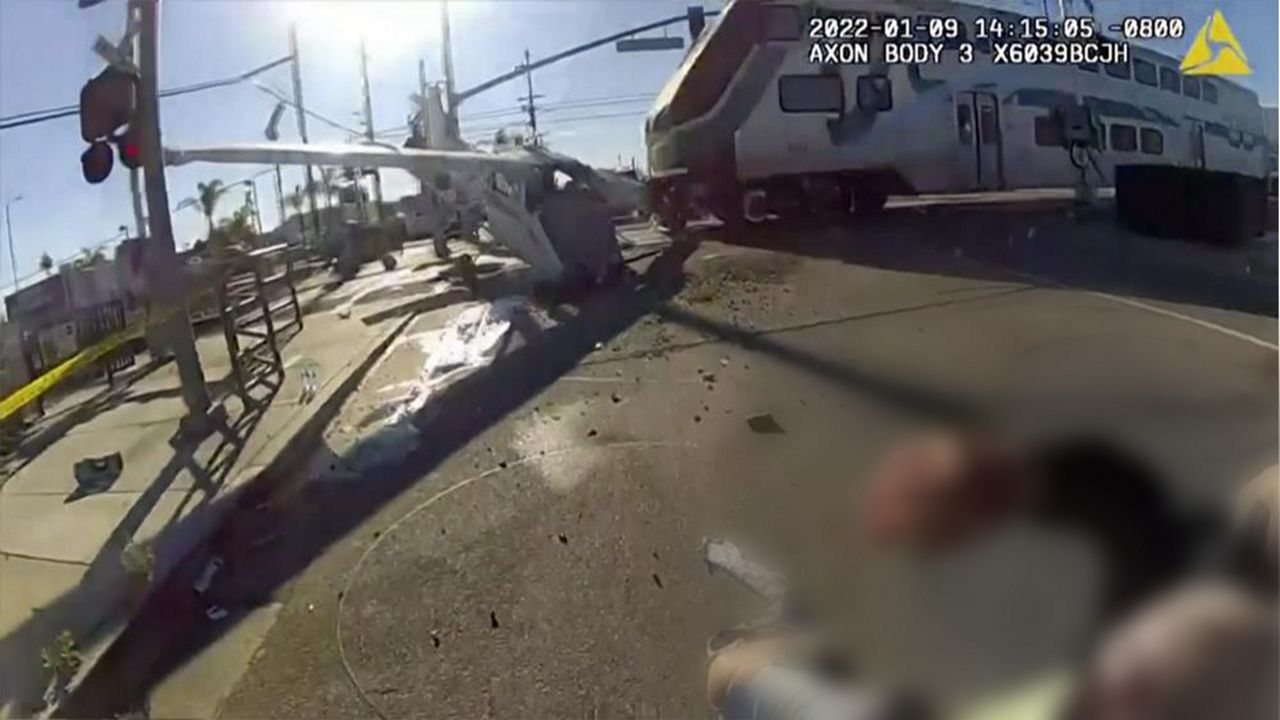 EDITOR'S NOTE: Multimedia journalist Taylor Torregano spoke with LAPD officers who helped rescue the pilot and bystanders who watched it all happen. Click the arrow above to watch the video.

LOS ANGELES (AP) — Los Angeles police officers pulled an injured pilot from the wreckage of a small plane that crash landed on railroad tracks just moments before a commuter train smashed into the aircraft over the weekend.

Bodycam video showed the officers working furiously Sunday afternoon to disentangle the bloodied pilot from the cockpit of the crumpled Cessna 172.

“Go! Go! Go! Go! Go!” someone yelled as the officers dragged the man away seconds before the Metrolink train, its horn blaring, barreled through the plane.

Foothill Division Officers displayed heroism and quick action by saving the life of a pilot who made an emergency landing on the railroad tracks at San Fernando Rd. and Osborne St., just before an oncoming train collided with the aircraft. pic.twitter.com/DDxtGGIIMo

The plane crashed shortly after takeoff at 2:10 p.m. from Whiteman Airport in the San Fernando Valley community of Pacoima, according to the Federal Aviation Administration. The timestamp on a police officer’s body camera showed that the train hit the plane at 2:15 p.m.

The plane had landed on the tracks at a railroad crossing just blocks from the Los Angeles Police Department’s Foothill Division station, and officers arrived at the crash scene almost immediately.

CBSN Los Angeles said four officers extricated the pilot and drag him onto the pavement. The station identified them as Damien Castro, Christopher Aboyte, Robert Sherock and Sgt. Joseph Cavestany.

It was unclear how much time passed before authorities realized the plane was on the tracks, or exactly when police notified the railroad, but the officers realized there was no time to spare.

“I had requested Metrolink to cease all train activity, but apparently that didn’t happen,” Cavestany said.

The male pilot was the only person on board and was taken to a hospital for treatment, the Los Angeles Fire Department said. He was not identified and no other injuries were reported.

Metrolink subsequently halted train service and road traffic was detoured in the area about 20 miles (32 kilometers) northwest of downtown Los Angeles. The FAA and the National Transportation Safety Board will investigate.