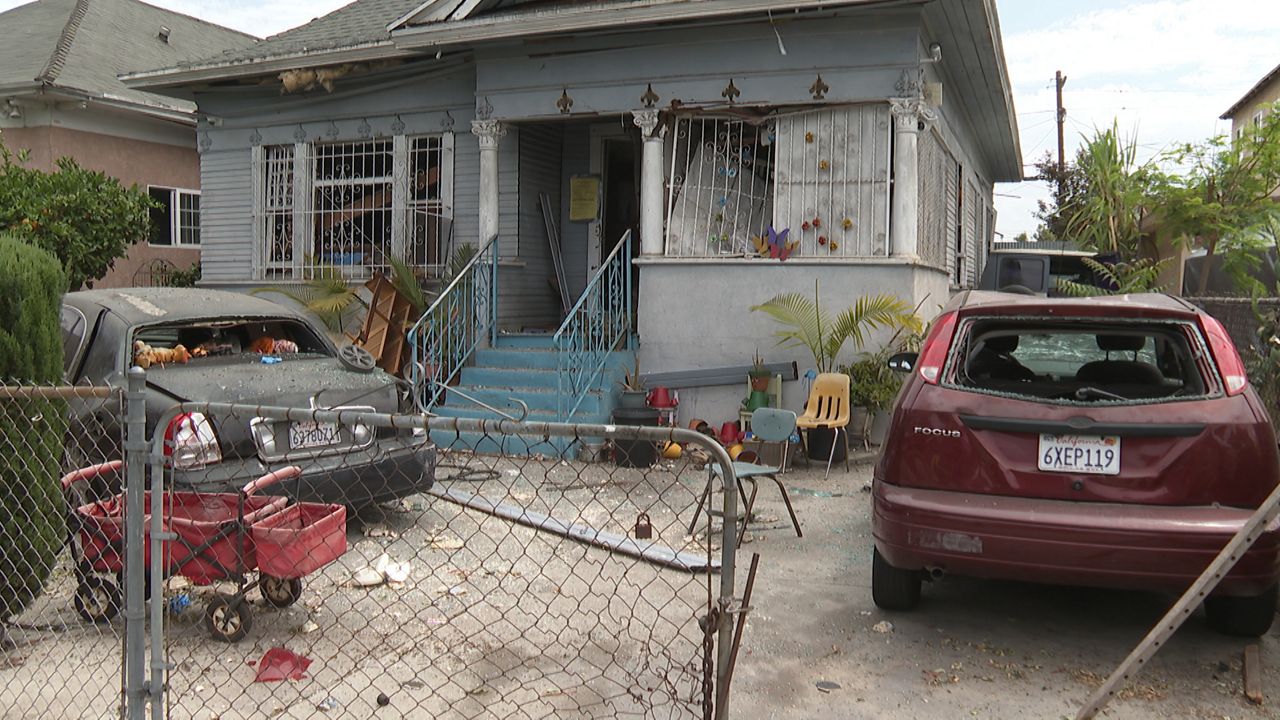 The fact no one was seriously hurt when metal and debris flew across South San Pedro Street leads Saif Alam to believe god must have been watching over his community.

“One projectile, a big piece of metal, hit up there and landed here,” Alam said while motioning toward the sidewalk outside the Mexicali Meat Market near San Pedro and 27th Streets in South Central. The blast blew out his front windows, skewed the front door and destroyed merchandise.

After 24 years of owning the building and running the store, he’s in recovery mode. The South LA explosion shut him down for eight days. He’s still waiting for an inspector to tell him whether the property is okay.

A Total Containment Vehicle, or TCV, owned and operated by the Los Angeles Police Department was supposed to contain the blast on June 30. The LAPD had just seized 32,000 lbs of illegal fireworks and LAPD Detective Edward Dorroh later told federal investigators they thought some were too dangerous to transport.

“Detective Dorroh indicated that LAPD bomb technicians told residents in the area either evacuate or stay indoors why the fireworks were destroyed in the TCV,” according to court documents submitted by ATF Special Agent Blake Maclearnsberry. “Detective Dorroh told me, that due to a malfunction or error in the TCV operation, the entire TCV exploded after ignition of the homemade fireworks and improvised explosives.”

More than a week later, some neighbors were still waiting to see if their homes would be red-tagged.

“I can’t even tell you how much glass was on top of my bed,” said one elderly woman, who didn’t want her name used, who was resting when the explosion shattered every window in her house. “I didn’t know one window could break into 22 million pieces.”

She said police advised her to evacuate, but she and her wheelchair-bound husband were unable to leave.

“So they said, ‘well, it probably will be safe. You can stay here.’ And then the next thing — boom.”

Three blocks away, Ron Gochez was aware of police activity in the neighborhood when he felt the ground vibrate.

“I actually remember saying to some of my friends, ‘maybe they detonated it.’ But then I said ‘naw, that’s stupid. In the middle of a community? There’s no way they can do that.’”

Gochez is vice president of the South Central Neighborhood Council, which unanimously approved his motion urging accountability from the LAPD.

Back at the Mexicali market, the blast destroyed Alam’s outdoor security cameras, which froze at the moment of impact.

“There were a lot of spectators because they were telling everyone to move and people were standing around,” Alam said.

Alam has insurance and plans to file a claim against the city. But he relies on the business of those uprooted by the blast and can’t fully recover until the neighborhood does.