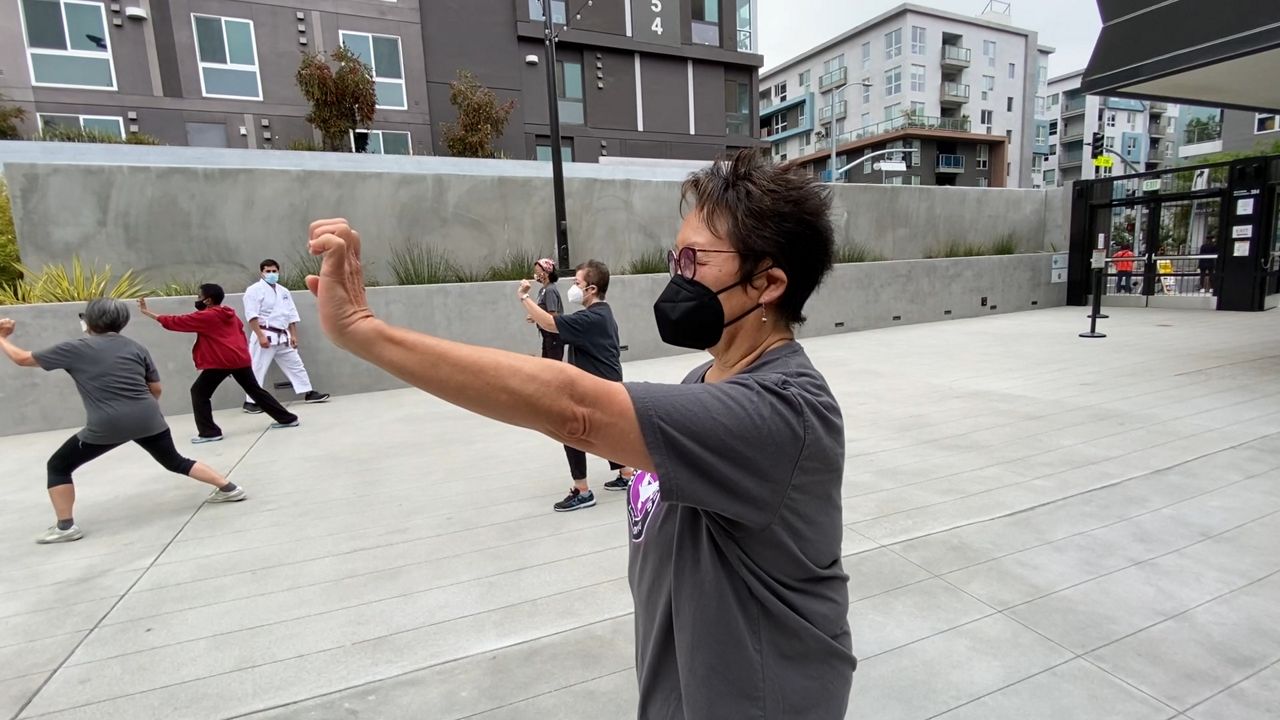 LOS ANGELES — The thrust of the hand. The stomp of a foot. Karate skills aren’t exactly what Miya Iwataki thought she’d be learning in her seventies and hopefully, she will never have to use them.

“I’m not fooling myself that I can go out and if there’s this big attacker I can, you know, kick his butt,” she said, “but I do want to learn how to keep safe in situations.”

Such situations are unfortunately happening with more frequency. A report released by California Attorney General, Rob Bonta, shows an overall rise in hate crimes in 2020. That includes a 107% jump in attacks against Asian Americans. Of the 89 statewide reported anti-Asian attacks last year, one-third took place in LA County. And since many incidents are not reported, officials believe the actual number could be a lot higher.

The rise in violence against members of the AAPI community, especially attacks on the elderly, has many on edge. Which may explain why a free series of self-defense classes for older Asian American women drew dozens of participants. Iwataki, who attended a Saturday morning session, says she’s being extra careful lately.

“When I go on my morning walk, you know, I’m really worried now,” she explained. “I’m so cautious.”

Fighting is nothing new for Iwataki, although her battles have been more political than physical. The longtime activist is a member of the group Nikkei Progressives, one of the sponsors of the special self-defense classes held at Terasaki Budokan.

“Many of us have been fighting against, you know, white supremacy and racism all our lives,” she said, “and when I see these incidents, especially attacks on elders that are defenseless, it just…it just makes me so angry.”

“I never thought I would have to lead a class like this ever,” Megan Teramoto said before slipping into her Karategi. The second degree black belt works with Little Tokyo Service Center, another sponsor of the events. She knows she can’t transform a group of seniors – or anyone – into self-defense experts in a few hours. Her goal, more than anything, she said, is to raise their awareness.

She encouraged the women to raise their eyes and walk tall, to look people in the eye so they know they have been seen and can be identified. While there were practical tips for basic karate moves, those, she said, should be a last resort.

“If you can avoid a dangerous situation, of course you always should,” she said.

Iwataki has heard this before. She’s listened in on a few webinars that she said stressed empathy and understanding. They didn’t land with her.

“There wasn’t a space that said I would angrily pull the person away,” she said,” so I think that for a lot of us we have to struggle with our anger.”

That anger and also frustration were palpable as Iwataki spoke with her friend Jan Tokumaru before the class. Iwataki believes the violent and racist atmosphere of the last year was “stirred up by the past administration.” Tokumara agreed, but also pointed out, it didn’t begin there.

“It’s so outrageous, but at the same time, it’s so historic,” she said.

While the class challenged their bodies, it also left the women with the understanding that their best tools for self-protection aren’t necessarily the physical ones.

She may not be ready for a black belt, but social activism is also a skill, and after a lifetime of looking racism right in the eye, Iwataki is a master.