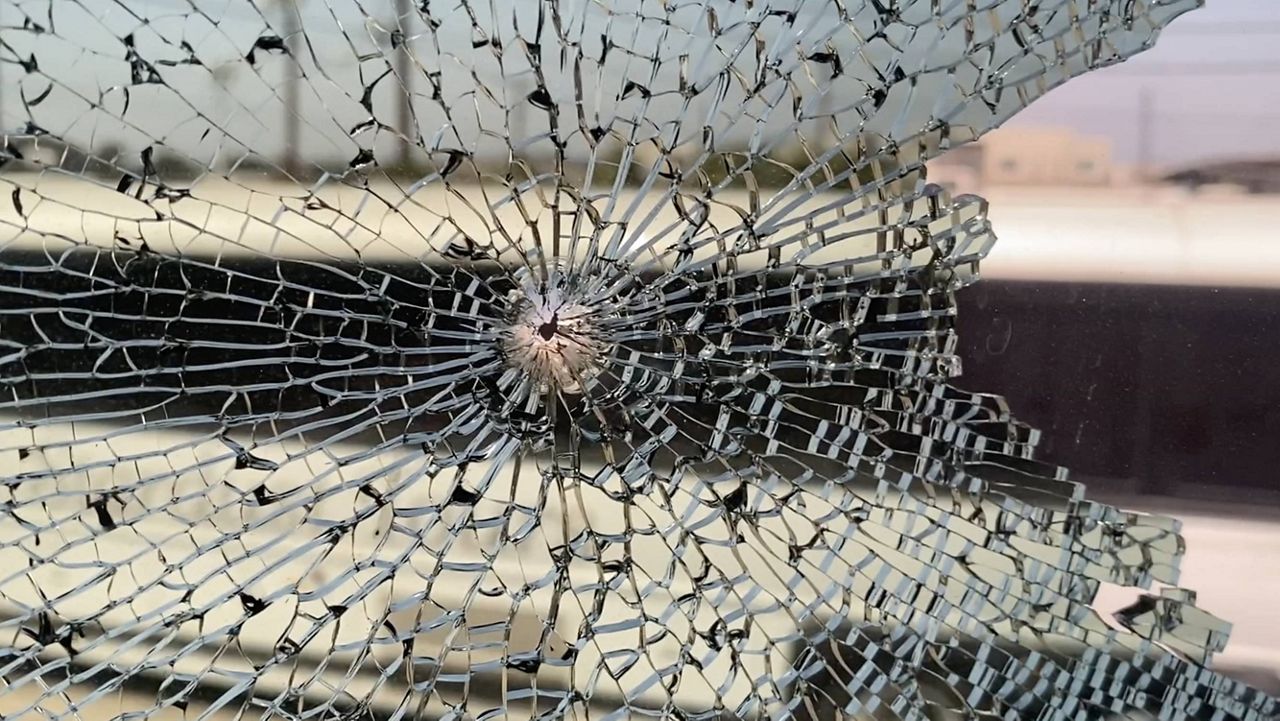 It will cost about $9,000 to fix the damages to the bus due to the high cost of deductibles for charter buses.

MONTEBELLO, Calif. — It feels like one setback after another for Frank Gonzalez who is the owner of Star-Dust Tours, a Montebello bus charter company.

“You can actually see the gun hole on the glass,” Gonzalez said as he pointed to a window on his damaged bus.


He had resumed business after being closed for a year due to the pandemic when a BB gun shooter on Interstate 105 near Bellflower targeted his bus.

Seventeen people were on-board the double decker, a group of students from Verbum Dei High School, their coach and one of Gonzalez’s drivers.

Fortunately, because Gonzalez has double-pane windows that are tinted, the inside portion of the glass did not shatter.

He worries that it could have been a tragedy if it had.

“If it was to hit somebody, you know you’re going to cause an accident and I think that’s eventually what’s going to happen unfortunately,” Gonzalez said. “Right now everybody just needs to look out but how do [you] look for something like this?”

The bus was struck three times, one shot right after another.

The BB gun shooting is among dozens of incidents that have been reported to the California Highway Patrol on freeways in Los Angeles, Orange and Riverside counties since late April.

It is more than a dangerous inconvenience for Gonzalez, who questioned whether he could even reopen after the hit his business took with the COVID-19 shutdowns. His company has been open since 1994, but he said it is hanging on by a thread.

He is overwhelmed with emotion thinking about it.

“We drained our savings. We have to rent the lot, just to survive. So, all our buses are gone. We are selling what we can. Just hoping to stay open another year,” Gonzalez said in tears.

Gonzalez got about $600 for that high school charter drive but the bus will cost him about $9,000 to fix due to the high cost of deductibles for charter buses.

He said his premiums increased significantly during the pandemic, so much so that he only had two insured buses left that he could afford for re-opening.

Now he is left with one.

“I can’t fix the bus, I don’t have the money, so all we can do is let it sit here,” Gonzalez said.

When asked if he started a GoFundMe page to help him with these repairs he said no, and that he couldn’t bring himself to ask for help because he knows so many people are struggling in this pandemic.

He is just grateful no one was hurt.

Gonzalez hopes the CHP will track a suspect down soon but so far, they have shared no leads with the public.

The agency said solving the shooting spree is its top priority, and is urging drivers to have their heads on swivels.

Gonzalez has this plea to whoever is responsible.

“If you’re seeing this, please just stop," Gonzalez said. "Because you are going to hurt someone eventually. If you’re not hurting them financially already, you’re going to hurt them physically."