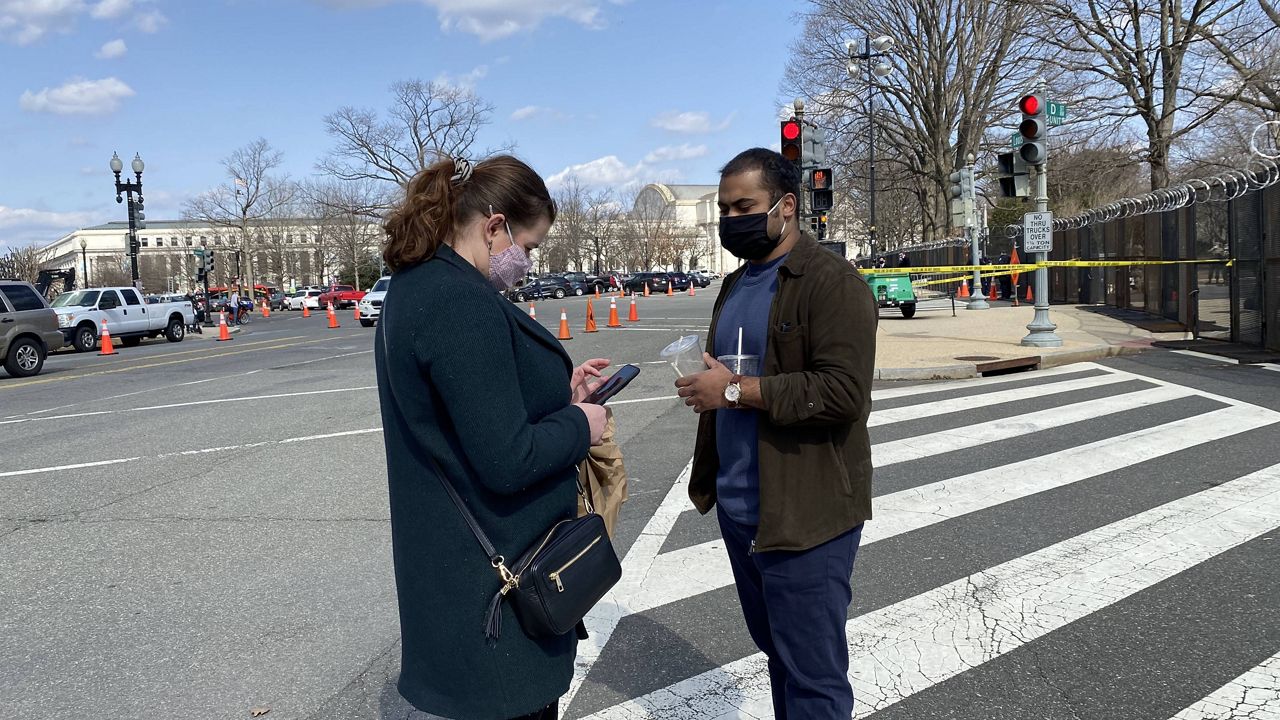 NYU students visiting said they hope eventually the violent threats will go away.

WASHINGTON — U.S. Capitol Police sounded the alarm for a potential breach at the U.S. Capitol Thursday, though fortunately, the day went undisturbed.


The White House said security stayed vigilant “day in and day out.” Roads around the Capitol are still closed and few people make their way around the streets surrounding the building.

One of those few included visiting-New York University student Carole-Louise Ashby. Ashby, 21, said she had seen pictures of the Capitol but never expected it to look so much like a fortress.

“It is quite surprising,” Ashby said. “I was not expecting as much of a divide. It is very obvious they are protecting against something and it’s a credible threat. I was expecting much less military. We actually met some National Guard officials in restaurants. It seems the whole city is reacting to what happened on January 6.”

Ashby happened to choose this week to visit the District of Columbia with her New York University friend, Akshat Singh. Singh said he was not surprised there was another threat to attack the Capitol, just two months after the insurrection.

“That incident particularly gives this threat a certain legitimacy, which is why we see so many people, so many guards,” Singh said.

Thursday’s threat appeared to be connected to a far-right conspiracy theory mainly prompted by supporters of QAnon that former President Donald Trump would have come into power again on March 4, which was the original presidential inauguration day, up until 1933.

Singh said he is torn because while he knows the armed guards are there for their protection, he cannot help but feel threatened just being near the Capitol.

“Honestly, as a brown man I feel threatened whenever there are people with guns regardless or not of whether they are in uniform,” Singh said.

Singh said he admits the ominous atmosphere could help be a deterrence for bad actors who may try to overrun the Capitol.

Singh said he thinks right-wing extremists have become emboldened by the January 6 attack.

“The country has been divided for a very long time and I feel like this is finally starting to manifest itself in the form of right-wing extremists actually taking action,” he said.

Ashby said while that may be the case, Thursday shows the threats may go away if the government works together.

“I’m quite surprised there is not even one person in sight,” Ashby said. “But I think that’s a great thing overall.”

In turn, she hopes if the intelligence community does its job, eventually the violent threats will dissipate.

According to the hearings this week, Capitol Police are aware of potential threats for when President Joe Biden is to deliver the State of the Union address to both chambers of Congress. The date has not been chosen yet, but Pittman is not taking any chances. On Thursday, she formally requested the DC National Guard to stick around for another two months.

The 5,200 guardsmen were readying to leave their post on March 12.