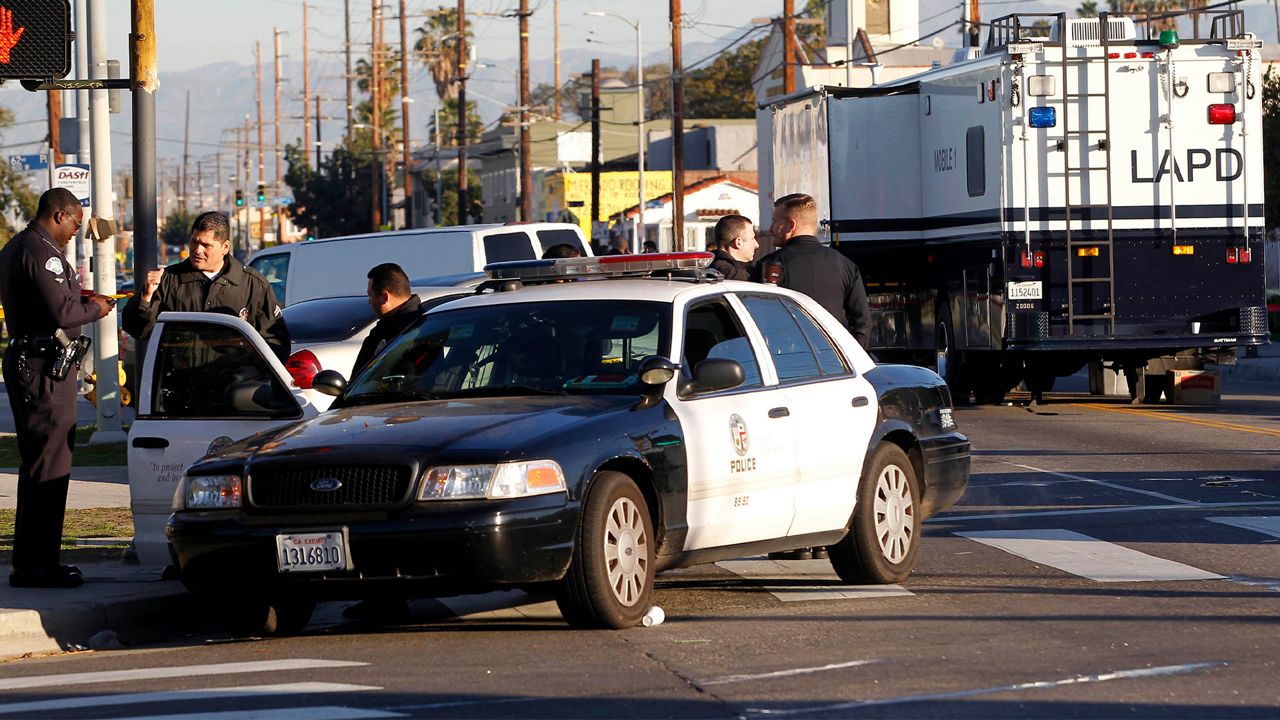 Los Angeles police officers investigate a shooting in South Central Los Angles on Monday, Dec. 29, 2014. A man fired a rifle at two Los Angeles officers in a patrol car on Sunday night but no one was injured in the attack that comes amid tension nationwide between police and protesters rallying against their tactics. LAPD spokeswoman Officer Nuria Venegas said Monday that one man was under arrest and a second suspect was being sought in the shooting in an area of the city ridden with gangs and crime and heavily patrolled by police. (AP Photo/Nick Ut)

VENICE, Calif. – Twenty-six minutes is a long time to wait when you’re on hold with 911.

That’s how long Martha Rider says she listened to an automatic recording when she called for help in Venice on June 8. She had been in her backyard when she heard a crash and rushed out to see a hit and run accident at the corner of Penmar and Rose Avenues.

One driver took off, leaving the pregnant victim to call police. More neighbors rushed out of their homes and also dialed 9-1-1, only to hear the same message. Finally, it was the victim’s cell phone that got through.

“Somebody could have been killing someone or shooting someone and for 26 minutes, nobody answer the 9-1-1 call,” Rider said.

“The bottom line is, we don’t always meet those 9-1-1 emergency response time thresholds, which is seven minutes and that’s because we’re asked to do so many different things,” Harris said.

A motion before the City Council would create a new, unarmed crisis response department that could take away some responsibilities from sworn officers, but Harris says funding those teams should not take away from the LAPD.

My colleague @C6Nury & I are calling for a systematic crisis-response plan to replace police presence in non-criminal situations with unarmed service providers including medical professionals, mental health workers, homeless outreach workers and others with specialized training.

“We’re open and ready to have conversations like that,” Harris said.

He says cutting the police department’s funding will ultimately lead to fewer officers on the street and longer response times to 9-1-1.

Back in Venice, Rider sees the impact of the homeless crisis every day. There’s a growing encampment near her house. She says there’s little officers can do about open drug use, bulky items, and occasional violence.

“There is no law, no order here in this community at all,” Rider said.

After 45 years in Venice, Rider says it’s clear to her something has to change.