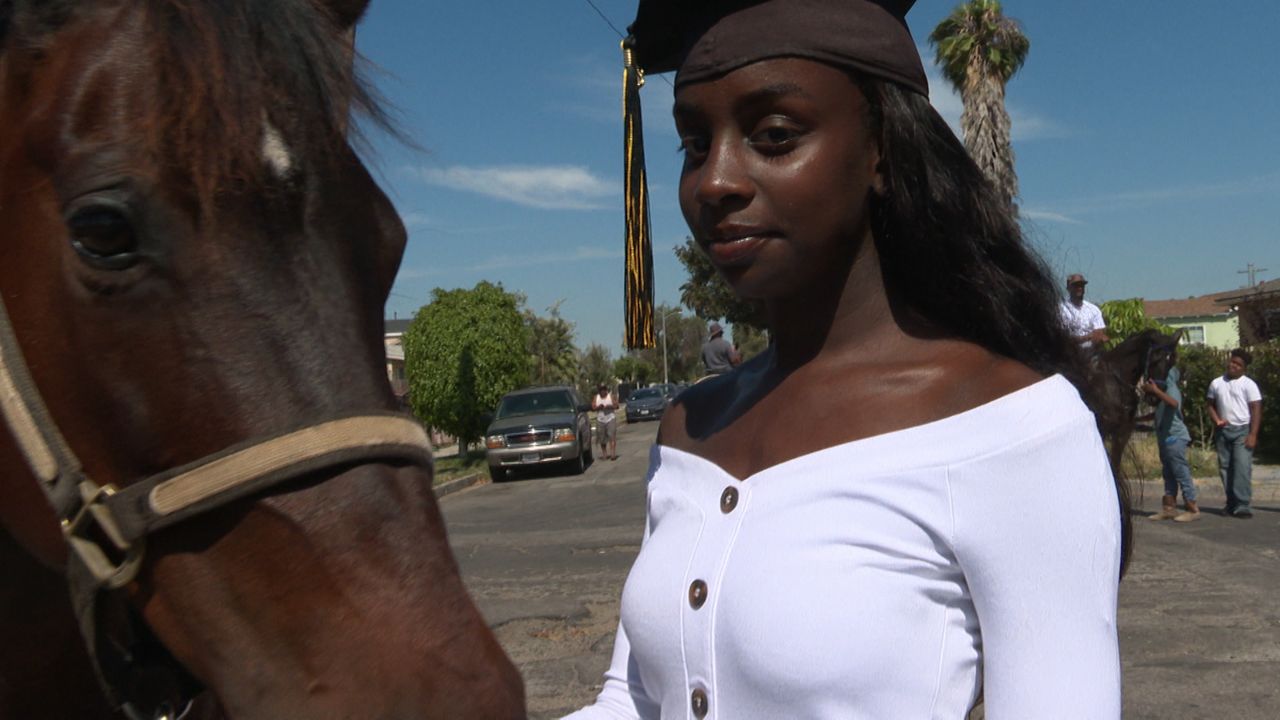 Wynter Floyd and her horse were one of the hundreds that participated in the Compton Peace Walk.

COMPTON, Calif. — When more than a hundred black cowboys and cowgirls showed up riding on horses for the Compton Peace Walk, for many, it was a sight to behold. For Wynter Floyd, no relation to George Floyd, she came to have her voice heard for the first time.

“It was my first protest and it was very fun because I was able to use my voice to fight [for] what [is] right and not only did I have myself, I also had a horse, actually another voice because as we’re walking, they’re making noises, too, and they’re letting themselves be heard,” Floyd said.

Floyd has been riding horses since she was 3 years old and professionally as a barrel racer since she was 12. Growing up in Compton, the Black horse riding community feels like family and her horses are more like siblings than pets.

“When I’m riding, it’s more so of a family thing,” Floyd said. “Everybody comes together as a community and it’s amazing. The horse community is very big and sometimes you fit in, sometimes you don’t, but when you’re in there, everybody is going to surround you like their own kid.”

Floyd was taught to ride by her stepfather Jimmy Bernard Bright who grew up on a farm as a child. At first he worried about allowing her to participate in the Compton Peace Walk, but he ultimately felt it was important for her to learn to fight for her rights. What happened to George Floyd in Minneapolis could have happened in their neighborhood.

“That’s the only way change is going to come, if we can get them where, you know, we can have meetings and everybody can talk about what they like and what they don’t like and what’s going on in the country right now,” Bernard Bright said.

Floyd is celebrating her graduation with her friends and family and will be attending Fresno State University in the fall. As the first African American member of the rodeo team, she looks forward to representing her community in a new city.

Yesterday was my first Protest and it was AMAZING 🥰especially since my voice was being used to fight for what matters right now which is BLACK LIVES ✊🏿. Thanks to @flossycowgirl , Ebony one of my fav. girls that did her job and behaved 🤷🏾‍♀️😂and my City COMPTON for making my FIRST PROTEST amazing and one to go down in history 💯✊🏿✊🏾✊🏽🖤🤎. #comptonpeacewalk #blacklivesmatter #blackisbeautiful #comptoncowgirl.