Since September 2019, Cal Fire has overseen the disposal of almost 400,000 pounds of illegal fireworks, including M-80-type devices. (Courtesy Bryan Gougé of CalFire)

LOS ANGELES — It’s that time of year again when otherwise peaceful neighborhoods erupt in a cacophony of bomb-like fireworks that transform them into sonic war zones. Morning, noon, or night, it doesn’t matter. Ear-splittingly loud "salutes" or "M-80s," as they’re known, are as pervasive as they are illegal.

Never mind that SoCal fireworks businesses have been closed due to COVID-19, or that California is a so-called "safe and sane" state that hasn’t allowed these things for decades. Angelenos are still getting their hands on them and firing them off at the least opportune times, terrorizing parents as they attempt to settle their children and dogs who cower and run.

But how did this even start?

The startling effect these salute fireworks have on civilians today is the polar opposite of their original intent. Developed by the U.S. Department of Defense, these pyrotechnic simulators were designed to inure military recruits to the sounds of war before sending them off to fight.

“You’re trying to give them some realistic combat environment -- the sounds of explosions, the sounds of whistles for munitions coming overhead, the smells of gunpowder in the air,” said James Wejsa, Pyrotechnic Technology Division chief for the U.S. Army’s Combat Capabilities Development Command Armaments Center. “You’re trying to get their emotional and sensing system acclimated to these things so that in actual combat, they don't panic and freeze up and become totally ineffective, just sitting there waiting to become a casualty.”

Salutes in the United States date back to the late 1920s, and were widely used for training during World War II because they were far less expensive, and less dangerous than actual munitions, said Jeff Ranu, chief historian for the CCDC Armaments Center. The specific salute known as an M-80 Explosion Detonation Simulator was first referenced in a 1956 military technical manual “for simulations of booby traps, grenades and other explosions in training.” It was used to prep troops for the Korean and Vietnam wars.

Salutes are still used in military training today to simulate IEDs, air burst artillery, hand grenades, booby traps, tank gun fire, and other instruments of war, but not the M-80. The military decommissioned it in the 1980s because it was too dangerous. Lit by a match, they caused too many serious injuries to soldiers’ hands. But today, the name lives on as shorthand for any obnoxiously loud firework, having been co-opted by fireworks manufacturers capitalizing on its legendary status.

To be clear, M-80 fireworks are not military-grade M-80s. The majority of M-80s left over from when the military produced them would have degraded and most likely no longer work.

One major tell: They’re not loud enough, hard as that is to believe.

A military M-80, “You’re looking at above 150-decibel range level. I think 140 decibels is permanent hearing damage,” Wejsa said. “If this thing goes off and you're not ready for it, you might have to change your shorts.”

The U.S. Consumer Product Safety Commission banned actual M-80s in 1966 because they were too dangerous for use by the public. And it continues to ban “fireworks devices that are intended to produce audible effects if the audible effect is produced by a charge of more than 130 milligrams of pyrotechnic composition.”

To determine “intent to produce an audible effect,” the CPSC does field tests, listening to the types of sounds fireworks make, rather than a specific sound level, to determine their compliance. A lot of them do not comply. Field tests of 2,548 fireworks between 2005 and 2014 found that 20% used more pyrotechnics than the CPSC audible effect limit.

What makes M-80-type salutes so loud is the amount of pyrotechnic powder that’s packed inside a cardboard tube. The more powder that’s used, the louder the bang.

Where do illegal fireworks come from, and how do they get into California?

M-80s and other salutes are not legal in California. The State Fireworks Law of 1973 allows only “safe and sane” fireworks to be sold to consumers. If a firework flies or explodes, it’s banned. M-80 type devices are not considered fireworks; they are classified as illegal explosive devices and are banned in all 50 states. Their construction remains unregulated, and they contain far higher amounts of explosive powders than what is legally allowed in a consumer firework. 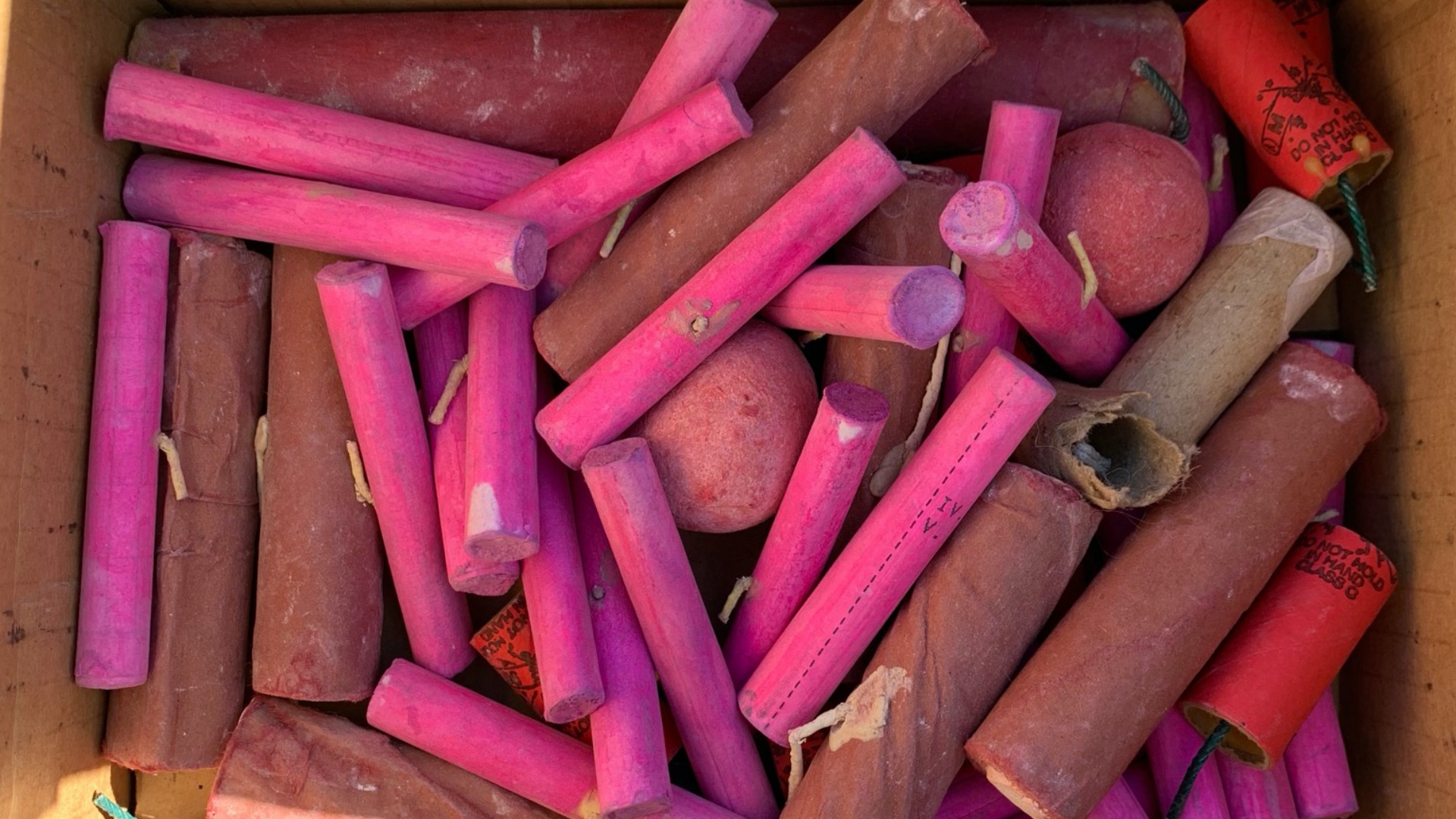 “Our parameters are to limit how far the sparks are emitted from the device, to prevent aerial devices, and to prevent devices that dart or travel on the ground, to protect the consumer, as well as to prevent fires,”​ said Bryan Gougé, senior arson and bomb investigator for CalFire - Office of the State Fire Marshal.

When it comes to consumer fireworks that are not considered safe and sane in California, "A very high percentage comes from Nevada because that's the closest source for somebody to travel out of state and illegally smuggle them into California," he said.

While Cal Fire recently received increased funding from the state for fireworks enforcement, education, and disposal, illegal firework enforcement isn’t as well funded or staffed as drug enforcement, and the penalties are a lot less severe, Gougé said. Gangs are both making M-80 type devices and selling illegally smuggled fireworks that, in California, can be sold with a 200 to 300% markup.

How to Tell the Difference Between a Firework and a Gunshot

“These crimes take place year-round, but building up to July is peak season,” Gougé said. “This is when people are using it.”

​Since September 2019, Cal Fire has overseen the disposal of almost 400,000 pounds of illegal fireworks seized by various law enforcement agencies within the state.

Get ready for more consumer fireworks

Annual fireworks consumption in the U.S. has almost doubled since 2000, from 152.2 million pounds in 2000 to 273 million pounds last year, according to the American Pyrotechnics Association. Most of the growth is in fireworks set off by individual consumers, not grand displays orchestrated by cities. In 2000, consumers used 67% of fireworks. In 2019, it was 91%.

And the percentage of consumer fireworks is expected to be even higher this year as COVID-19 has forced many of the nation’s 16,000 Independence Day professional fireworks displays to be canceled.

“Consumer fireworks are going to be even more popular than they have been because people are itching to do something,” said Julie Heckman, executive director of the American Pyrotechnics Association in Bethesda, Maryland. “They’re going to be forced to celebrate at home.”