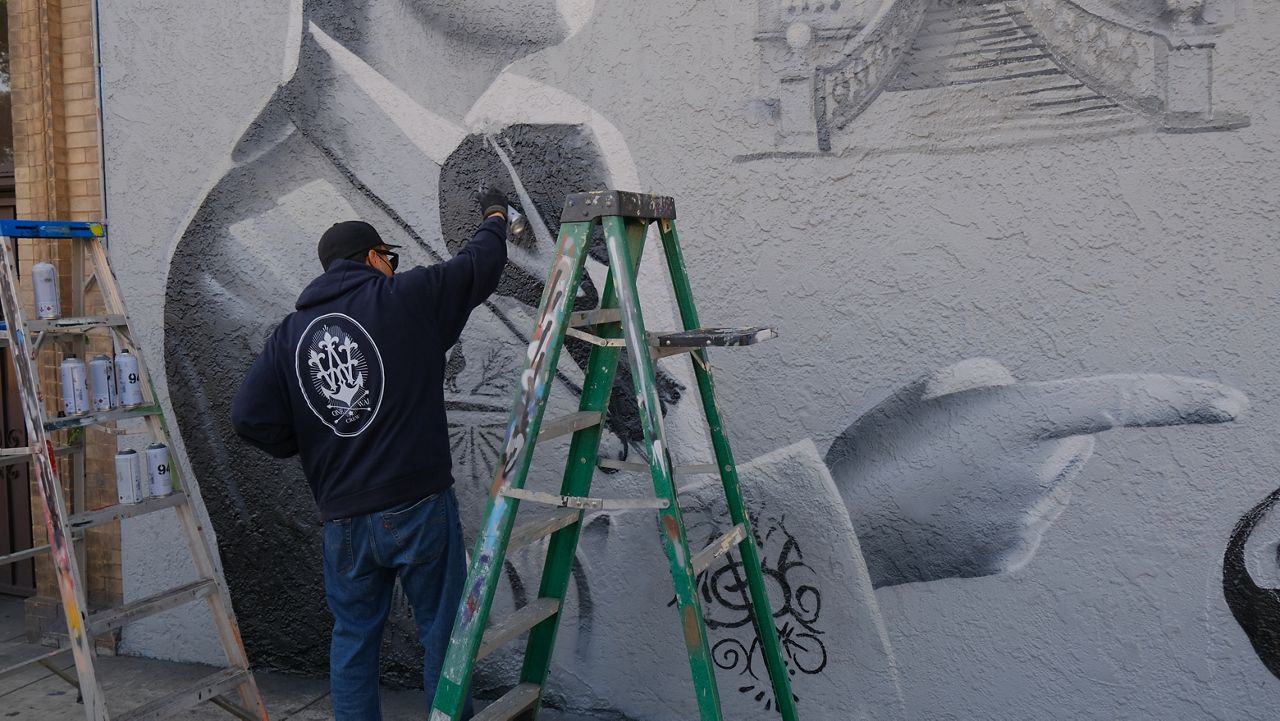 LOS ANGELES — His neighborhood made him a muralist, says the artist known as Tetris. As a youth, he learned his artistic skills doing graffiti in high school, but now does much of his work as a muralist.

After high school, Tetris went to Cal State LA for graphic design, but found he was at a disadvantage. His portfolio was not as strong as he thinks it could have been, partly because he had never received much formal studio training or had time with the technology that is key to success.

Tetris has always had a passion for creating art that celebrates his cultural community, but growing up he did not have access to formal art programs while at school, so he took the streets doing graffiti, occasionally having brushes with the law.

“In low-income communities, we don’t get access to art, to professional studio education, and so it’s just a big disadvantage,” said Tetris.

Like many, Tetris believes that art programs are an important part of childhood and professional development, but knows not all kids have equal access often due to lack of funding.

“You gotta go through a process,” he said. “You gotta practice every day, and if you use those same tools at other jobs, focusing on the same process, I think it just helps.”

Although Tetris is not eligible to vote here in the U.S., he has been a vocal supporter of Proposition 28, a measure appearing on this year’s midterm election ballots that would require the state to allocate at least 1% of Proposition 98 funding for music and arts education.

Tetris has been helping support arts education in his own way by founding the Southeast LA Art Center in Bell, which offers classes in life drawing and even breakdancing workshops.

“A lot of kids start off with this passion with art, and then they don’t have the right direction,” he explained.

Proposition 28 proposes schools would use 1% of the minimum guarantee from the state budget, which would grow or shrink with the economy, to fund a wide range of art programs, and although Proposition 28 has no formal campaign against it, there are some opponents that argue the measure could limit schools’ options to navigate future budget crises, which could mean the state would be locked into this funding for arts in schools, which might force cuts in other programs.

But for Tetris, the father of two young girls, he’s hoping Proposition 28 could make a difference in their lives.

“It’s been a great part of my life watching them grow and succeed and bringing different ideas to their art,” he said.