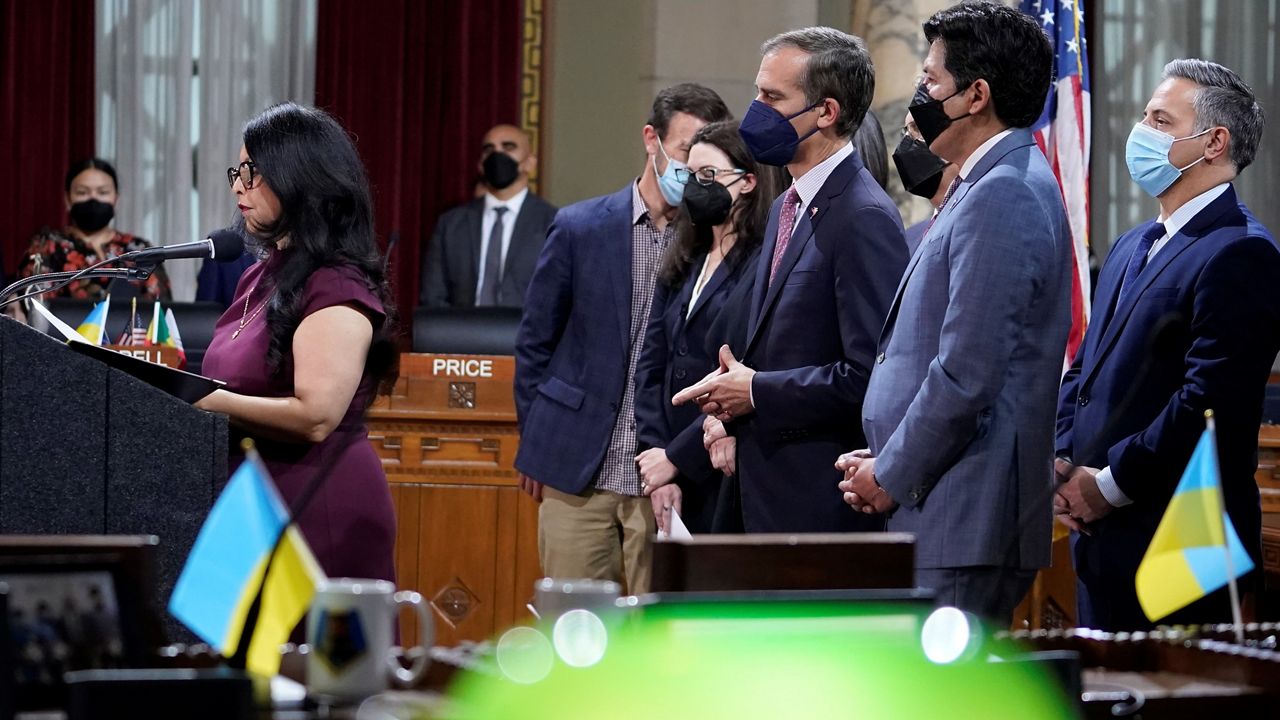 EDITOR'S NOTE: Multimedia journalist Sarina Sandoval spoke with a business owner, a Black Lives Matter member and a local resident about the calls for resignation. Click the arrow above to watch the video.

"There is no room for racist language and hateful incendiary rhetoric to coexist with the duties of serving in public office, especially in a place as diverse as the city of Los Angeles," according to a statement Monday from the National Association of Latino Elected and Appointed Officials. "We call on Los Angeles City Council President Nury Martinez to resign from her leadership post and office, and also ask that the other City Council members involved, Kevin de León and Gil Cedillo, assess the actions they need to take.

"Words matter, and we cannot turn a blind eye to anti-Black or homophobic sentiments. The time for unity is now, and we stand ready to work with our brothers and sisters throughout the community to move the city of Los Angeles forward."

The community group Union del Barrio also issued a statement blasting remarks by Martinez and de León and called for their immediate resignations from the council, along with Cedillo.

"These divisive statements by career politicians are an affront to the decades of work among Black and Brown communities to build unity and solidarity," according to the group. "However, let us be clear, the grossly reactionary and backwards way of thinking of these 'community leaders' DOES NOT represent the principles and values of the Black and Brown community.

The California Federation of Teachers issued a statement calling the comments on the audio recording "appalling and unacceptable."

"Leaders in our local, state and national governments must be held to the highest standards, advocating for all members of their community, and when they fail those standards, they must step down or be removed," according to the union. "We must unite our communities against hate and fear. That is why we, the leaders of the CFT, stand with Council member Mike Bonin and other city leaders in asking for the individuals who made these hurtful comments to resign. We must unit, not divide our communities."

Martinez is a former member of the LAUSD Board of Education.

Current board member Kelly Gonez issued a statement calling on the trio of council members to resign.

"As a mother, a Latina and an educator, I am appalled by the racist, hateful comments made so casually and callously by our city council leaders," she said. "Our communities and our children deserve better. This conduct acutely demonstrates that the individuals involved are not fit to lead our city in any capacity. Council members Cedillo, de León and Martinez must resign immediately."

Leaders of Southern California locals of the Service Employees International Union issued a joint statement calling for everyone involved in the conversation to resign.

"The anti-Black and anti-Indigenous racism, homophobia, abuse of power, divisiveness and outright cruelty expressed in this conversation are outrageous and unacceptable," they said. "These are not the values of the labor movement and they undermine the unity required to build an equitable Los Angeles. These individuals have failed the test of leadership. It is important that they resign their positions and step aside so the healing can begin and our movement can come together to make progress for all working people in Los Angeles."

"We need no further investigation. The video exposes all three council members making or agreeing to statements that are Anti-Black, hateful and shows contempt for the people who paved the way for them to hold these political positions. As civil servants, the council members are here to serve the entire community, not just the ones who look like them. Our leaders should be held to a higher standard, and the conversations expose that these council members can not live up to that standard."

"What injured parties — and, believe me, every Angeleno was injured in some degree by this toxic exchange — should demand are full resignations, followed by a humble leaning-in to heal the relationships between Black and Brown, Indigenous and non-Indigenous, queer and straight, as well as between labor leaders and union members," Kuehl said.

"Sadly, this ugly and cynical conversation will only confirm the public's distrust of city leadership. We must redouble our efforts to ensure that racist slurs, hate speech and violent rhetoric has no place in Los Angeles — let alone in the highest rungs of the city's political leadership. To begin the long process of rebuilding trust, it is in the city's best interest that the council members involved resign and take full responsibility for their actions."