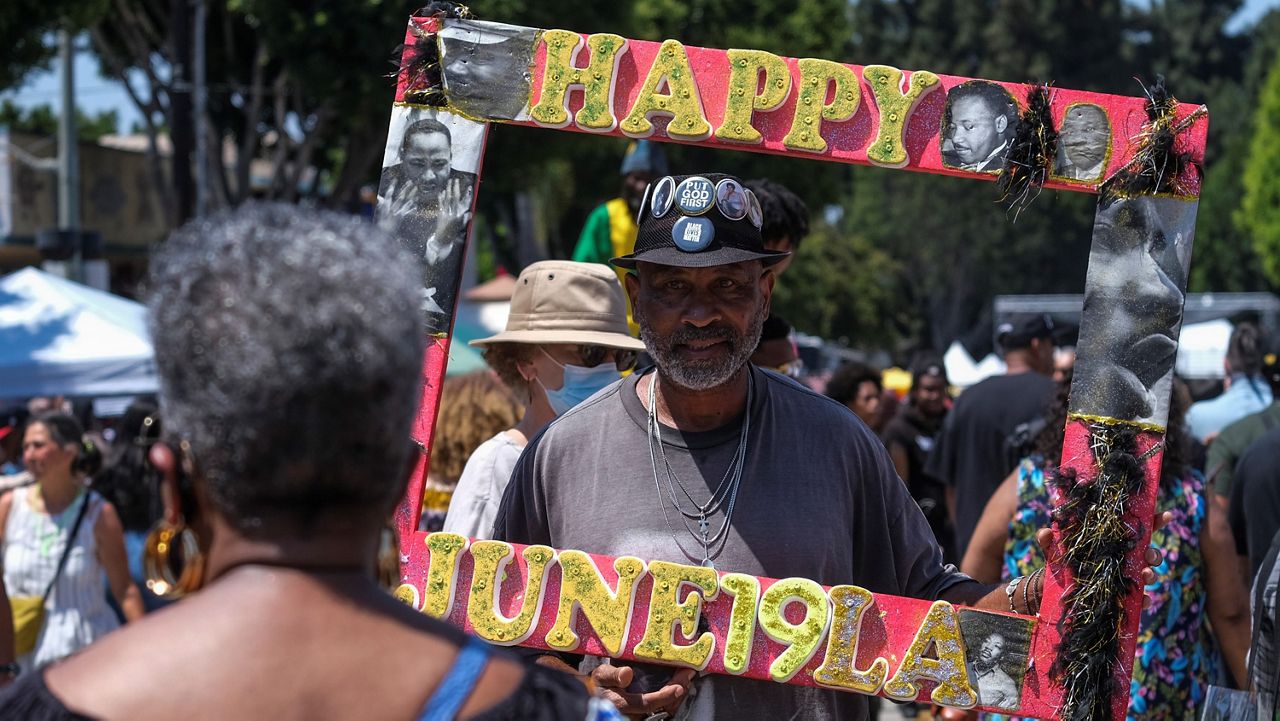 A man carries a frame during a Juneteenth commemoration at Leimert Park Plaza on Saturday, June 19, 2021, in Los Angeles. (AP Photo/Ringo H.W. Chiu)

EDITOR'S NOTE: Multimedia journalist Nathalie Basha spoke with a Los Angeles city employee about the Juneteenth holiday. Click the arrow above to watch the video.


The Los Angeles City Council voted unanimously in August 2020 to initiate the process of making Juneteenth — June 19 — an official city holiday to celebrate the end of slavery in the United States. The motion was introduced by Councilmen Curren Price, Herb Wesson and Marqueece Harris-Dawson following June 2020 demonstrations demanding racial equity and justice in the country and to protest the killings of Black Americans at the hands of police.

"The recognition of Juneteenth from the federal government, and now with the second largest city in the U.S., signals a changing tide, one that's long overdue, in the name of equity, racial justice and dignity," Price said Friday. "As a 71-year-old Black man in America, I have lived the struggles and understand first-hand the toll that it's taken on our people. In the words of the great Maya Angelou, 'still we rise.'"

"The journey for Black Americans has been long and windy, filled with a bruised and a shameful past. However, embracing the pain and remembering and honoring our sacrifice strengthens and unites us," he added.

Juneteenth is the commemoration of the end of slavery, specifically in Galveston, Texas, more than two years after the Emancipation Proclamation was issued. Enforcement of President Abraham Lincoln's proclamation generally relied on the advance of Union troops.

Harris-Dawson said during the meeting that the "sanitized version" is that it took the army two years to arrive in Texas, adding that "the actual history is that the White House sent not one but two emissaries to the states to give them the documentation. Those people were killed before they got there."

He also spoke before the vote and drew contrast between the vote and the presence of a Confederate Flag at the meeting, which was held up by Mike Greenspan, who frequently speaks and uses racist language at City Council meetings.

"I am struck by the irony of where we are today ... as we're discussing Juneteenth, a man stood 20 feet from me at a podium holding the battle flag of the Confederate Army, the most deadly struggle in the history of the United States," Harris-Dawson said.

Wesson before the vote described the horrors experienced by kidnapped Africans as they were brought on boats to the United States, as well as about the experience of Black people in the U.S. Friday, saying:

"It's now our responsibility to ensure that those dreams are realized in a world that has been constructed to ensure that Black people fail, that Black people at best live a life of mediocrity. If you truly believe in your heart and your soul that what was done in the past was wrong, then let us frickin' change it, the systems in place in this country today are systems that don't treat people of color fairly."

He also spoke about how systemic racism in the United States has affected him personally, saying, "I have to read something 10 times when maybe you only have to read it once, because the school I went to as a kid sucked, but I read it 10 times because I want to be the best that I can."

The City Council voted 14-0 to make Juneteenth a paid holiday for employees, starting this Monday. The holiday this year takes place on a Sunday.

Juneteenth was also recognized as an official federal holiday in 2021.