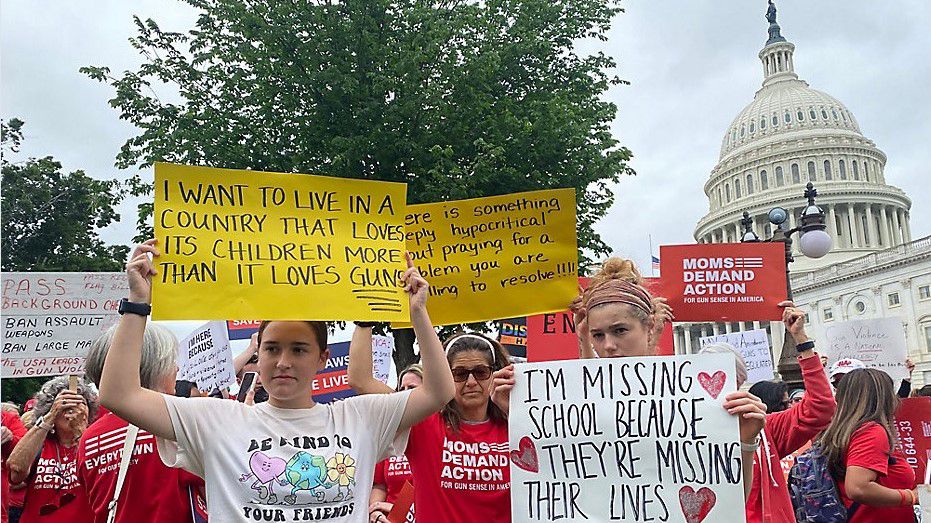 Protesters stand outside the Capitol calling for gun control legislation.

WASHINGTON — In the aftermath of the shooting in Uvalde, Texas, activists across the country are calling for gun control.

That includes Washington, D.C., with protesters showing up outside the Senate steps Thursday, before the chamber convened for its Memorial Day recess.


“Enough is enough! Enough is enough!” cried out protesters, many of them donning red shirts that read “Moms Demand Action.” It’s the same name of the grassroots nonprofit founded by Bay Area resident and mother of five, Shannon Watts.

“We are so outraged, and fed up, and we have to do something with that energy. And I think the most important thing we can do is demand action now, but to not stop in just a few days. To keep going all the way through November and to hold any lawmaker who doesn’t act accountable,” she told Spectrum News.

“The American people want the NRA to stand for ‘Not Relevant Anymore in American politics!’” declared Sen. Ed Markey, D-Mass., getting a cheer from the crowd.

Sen. Kirsten Gillibrand, D-N.Y., criticizing her colleagues across the aisle.

“It is a disgrace in this country that Congress cannot, cannot overcome the greed and corruption of the gun lobby,” she said.

As he stepped to the microphone, Sen. Alex Padilla, D-Calif., was emotional. He told the crowd that as he was speaking, his children were preparing to go to school back in California.

“I’m here as a U.S. Senator. But I’m also here as a father,” he said. “My two youngest are the same age that could have been in that classroom in Uvalde, Texas, so yes, this is personal,” he said.

Murphy’s career has focused on gun control. Before being elected as senator, Murphy represented the Congressional district Sandy Hook was in.

“If we don’t succeed, we’re having votes. We’re putting people on the record. One way or another, we’re going to have a debate here. We’re going to force people to tell America which side they are on. So we are going to work our tails off to get that compromise, but we are not going away, we are not being silent,” Murphy said.

Rep. Lisa Blunt Rochester, D-Del., was the lone congressional representative to stop by the rally. Blunt Rochester, who was not scheduled to be in Washington because of the House being in recess, told the crowd she has called back for a meeting when she saw the protesters gathered.

“I’m not a senator. I’m a member of the U.S. House, and we did our work!” said the lone Delaware representative, referring to the two bills the House passed that have remained stalled within the upper chamber. “I want people to know we do this because we love our children. Love is more powerful than hate!”

As the protest wrapped up, the group of protesters from Everytown and Moms Demand Action took a photo together with the Capitol in the background. The senators went back inside, where they said they hoped to meet with Republican colleagues to discuss bipartisan gun legislation. With the filibuster, 10 Republicans must join Democrats to move a bill to the floor for debate, which is challenging on even the most mundane bills. Negotiating on gun control will be an uphill battle.

But Watts said if action is not taken, volunteers from her organization are ready to mobilize and help get officials elected who will work to create change.

“It’s how we flipped the House in 2018. We elected, for example, our volunteer and gun violence survivor Lucy McBath, who is now a congresswoman in Georgia,” Watts said. “It’s how we elected a gun sense president and senate. So yes, we are going to get out the vote harder than ever and we will have this momentum at our backs.”

The Senate adjourned Thursday for recess and will not be back until June 6. Until then, gun control legislation will be put on hold.