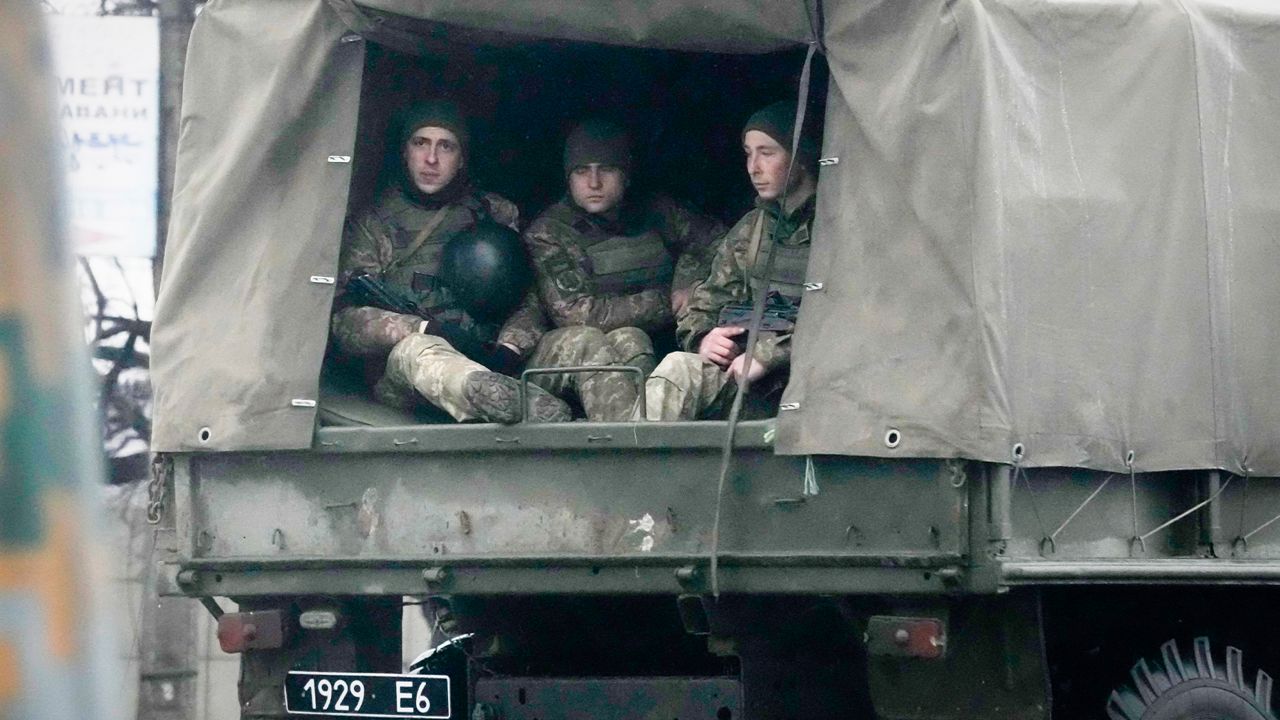 EDITOR'S NOTE: Multimedia journalist Itay Hod spoke with demonstrators in Los Angeles who on Thursday protested the Russian attack on Ukraine. Click the arrow above to watch the video.

As the world and its markets react to the unfolding news of Russia's widespread military attack on Ukraine, a group of Ukrainian Americans gathered in Westwood Thursday to express outrage over Russia's invasion of Ukraine, while Southland leaders condemned the aggression and called for the most severe sanctions possible.

Rep. Mike Garcia, R-Santa Clarita, said he was praying for the "innocent civilians and military personnel in harm's way in Ukraine." But he laid blame for the attack on the Biden administration's failure to create "a stronger deterrence and failing to demonstrate to the world that the United States and our allies are to be respected."

Tonight, I pray for the innocent civilians and military personnel in harm’s way in Ukraine.

"The unlawful steps Russia is taking against Ukraine are only the beginning," Garcia said in a statement. "China formally annexing and attacking Taiwan is the end state of all of these actions. Taiwan will be in the crosshairs of China if we do not start growing a backbone as a superpower. Until then, the US becomes more vulnerable every day this persists."

California is standing with the people of Ukraine tonight.

Russia is embarking on an unprovoked attack - an armed attempt to overthrow a sitting democracy.

There must be consequences.

"I stand with the people of Ukraine," tweeted Long Beach Mayor Robert Garcia, a recently announced candidate for U.S. Congress.

I stand with the people of Ukraine and pray for their safety and security. Putin and Russia have started an unprovoked war and the world community must hold him accountable.

“It is a dark time, for the people of Ukraine and for our global peace and security. The United States must stand steadfast against Russian authoritarianism and unprovoked aggression.

“Together with partners and allies, we must support Ukraine, hold Russia accountable, and be prepared to provide humanitarian assistance to those in need. I will work with colleagues in Congress and with the Administration to respond swiftly.”

The Los Angeles County Sheriff Department tweeted "Our thoughts are w/ the people of #Ukraine," adding "we are thinking of the Ukrainian diaspora in LA."

Our thoughts are w/ the people of #Ukraine who are experiencing an increasingly tenuous situation, & an uncertain future. We are thinking of the Ukrainian diaspora in LA, & understand the difficulty of being away from home. We pray for a diplomatic solution & lasting peace. pic.twitter.com/sIZ1WEOSK0

"Putin's invasion of Ukraine is more than just a brutal act of war," tweeted Rep. Adam Schiff, D-Calif., who represents California's 28th District and chairs the House Intelligence Committee. "It's an attack on the idea that countries are free to choose their own destiny."

Putin’s invasion of Ukraine is more than just a brutal act of war.

It’s an attack on the idea that countries are free to choose their own destiny.

An attack on the rules-based order that has kept world peace since WWII.

And, most critically, an attack on democracy itself.

In Westwood, several dozen people held a rally against the military assault. They waved Ukrainian flags, played the Ukrainian national anthem and held signs with slogans including "Help save my home" and "Stop Putin."

Another rally of Ukrainian-Americans is expected in Studio City Thursday night.

"Russia's invasion of Ukraine is an unprovoked attack with no justification, and it is incumbent on all nations to ensure that Putin and his government are met with severe consequences," Sen. Dianne Feinstein, D- California, said in a statement. "Putin must understand that such aggression will not stand.

"The United States stands shoulder-to-shoulder with our NATO allies against any further Russian belligerence. The alliance is strong and united. And the U.S. government has done an excellent job collecting and disseminating intelligence on Russian plans to make clear that Russia intended this invasion all along and fabricated pretenses to launch it. I'm confident the intelligence community will continue this critical work."