LOS ANGELES — The women’s rights movement was alive and well on the Westside Saturday, as two rallies drove hundreds of people to raise signs, march and chant for women’s reproductive rights in West Hollywood and Beverly Hills.

Around 11:30, the West Hollywood Women’s March was rounding its final corner back towards the city’s eponymous park, when a lone man began heckling the stragglers. Abortion, he said, was murder, and reproductive rights were only about “killing little babies.”

West Hollywood Mayor Pro Tem Sepi Shyne was shepherding the last marchers through the crosswalk and down the sidewalk as she heard this, and without looking back, raised her face to the sky and started to chant: "Abortion rights are human rights!"

As she and the other marchers walked away, the heckler was drowned out by the chants.

The WeHo women’s march — which this year was focused on women’s reproductive and abortion rights — was one of nearly two dozen to take place throughout the Southland on Oct. 2. With only a few hundred attendees, it was dwarfed in size by the downtown Los Angeles march, which expected more than 20,000 attendees  — but the folks at the West Hollywood march were just as passionate as their downtown counterparts. 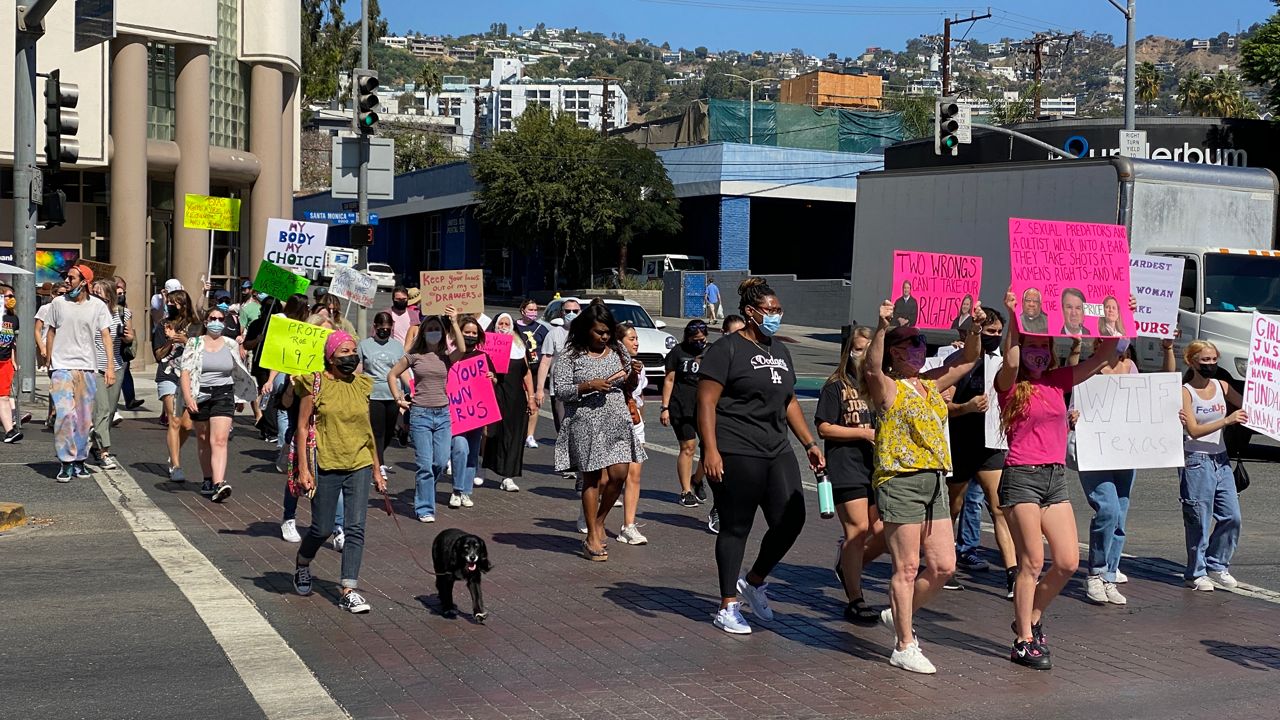 Some, like Deb Dawson, showed up from as far away as Ventura County. Dawson, who showed up to the rally in an “AUNTIFA – Aunties Against Fascism” shirt, was there to march in support of her niece and her niece’s young daughter.

“I’ve been fighting, and I’ve got to fight for them…and yeah, it’s just exhausting,” Dawson said. Her concern is that conservative officials — like those in Texas, who passed the abortion-restricting Senate Bill 8 — are seeking to push America toward a more theocratic state.

Shyne is familiar with theocratic rule — she’s an Iranian immigrant whose family migrated to the United States when she was young, shortly after the Iranian Revolution. When she came out as a lesbian in high school, she found gaining acceptance was a tough row to hoe, thanks in large part to religious conservatism.

“Religion is really a driving force behind these conservative laws…we have extremist republicans in power now, and they’re really bending to religious ideologies,” Shyne said.

She acknowledged that, to an extent, the event was preaching to the choir.

“But what we need to do is to take this activism and take it to other states,” Shyne said. She noted that Democrats in safe liberal states like California poured money into races across the country, and she personally phone-banked for officials elsewhere. “When I came out, it was all about conversations…it took a long time for my family to go from denial to tolerance to acceptance. By the time I turned 40, they began advocating for my community — because of my courage and patience with them, just having conversations.”

But sometimes, conversations are not enough.

The Beverly Hills Women’s March event, which was more of a sign-holding rally near city hall, was largely peaceful. But around 2:30, a heckler strolled through the crowd, shouting epithets.

Mary Jane Abare, 80, yelled back at him; the man whirled around to her, telling her to shut up, and strode toward her. Abare stepped forward, and though he went nose to nose with her, she stared up defiantly. After a moment, the man walked away, sneering. Abare was cheered by the rally goers.

“It was instinctual,” she said. “I wasn’t going to let him get away with it.” 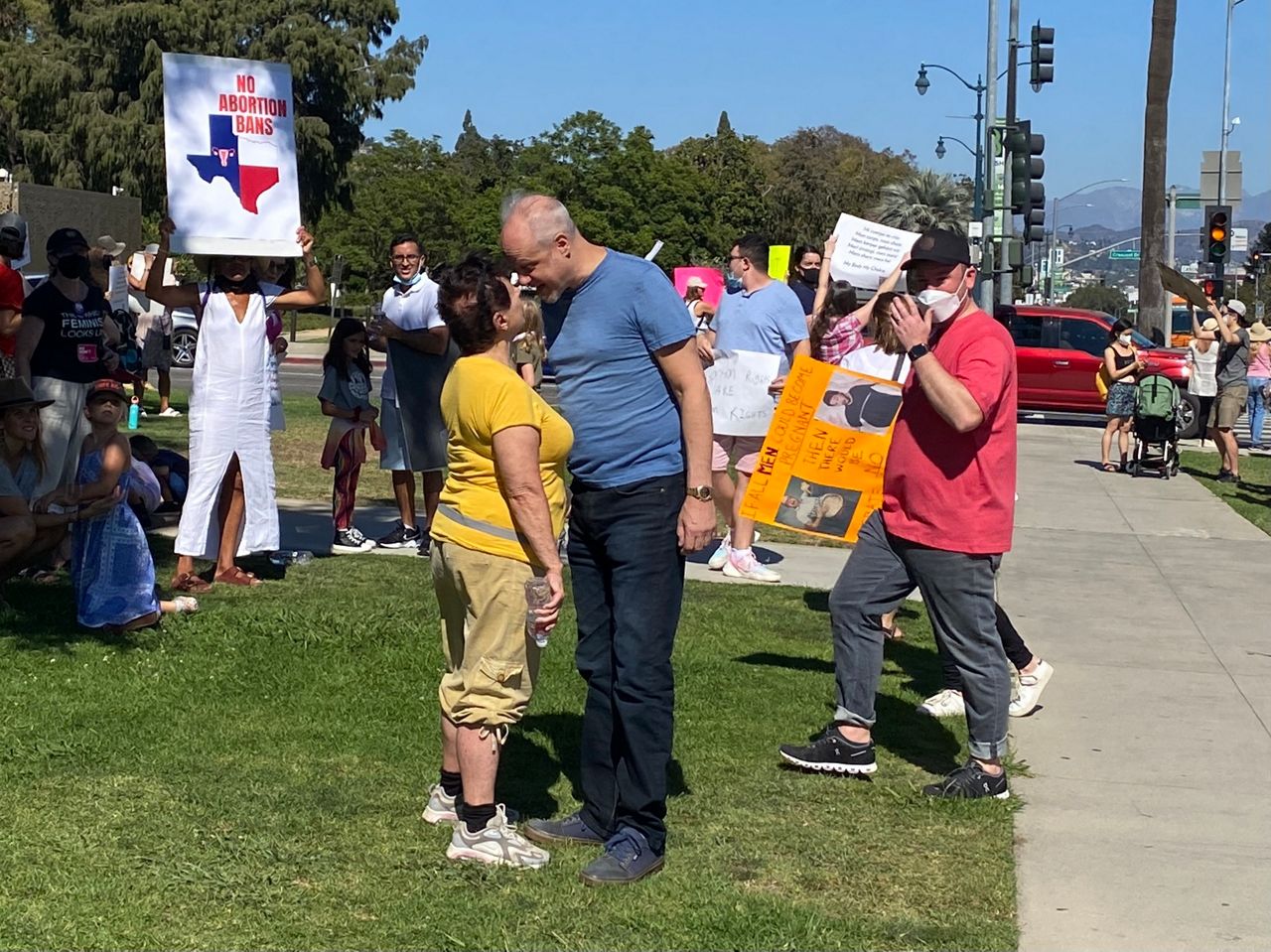 Abare had attended the rally in opposition to Texas’s SB 8, which she and others felt may revert a woman’s right to an abortion back to the days before the decision in Roe v. Wade, the landmark case that affirmed a woman’s right to safe and legal abortion in the United States.

Abare herself nearly died of a then-illegal abortion in the 1960s, when the procedures were outlawed, dangerous, and performed in fly-by-night facilities, with doctors who wouldn’t share their names or histories.

Were abortions safe and legal earlier in the 20th century, Lynne Bierut may have been able to meet her grandmother — a woman who died when her husband forced her to get an abortion when he didn’t want to raise another child.

“She left behind three children without a mother, and my grandfather from what I understand, just wasn’t the nicest man,” Bierut said. “I just feel like it’s such an individual choice, and there’s so much we don’t know about why people do what they need to do, that women should have the right to choose who should be responsible for that baby.”

Abortion, said Wendie Dox, is not just a matter of birth control, but of ensuring a child might have the best chance at a good life. She carries a rare genetic disorder, Ornithine Transcarbamylase Deficiency, which results in excess ammonia in a person’s bloodstream, and may be passed down the family line.

“I lost a child that lived for 36 hours. I have two daughters now, and if they accidentally get pregnant and do not have the correct care, they will lose that child within 36 hours,” Dox said. “I don’t think anyone should manage to go through that…if I could have ended that pregnancy at 12 weeks, instead of having to live with it for 39 weeks, I would have done it. My children need to have that right in case that happens to them.”

The Beverly Hills rally was headlined by women’s rights activist Gloria Allred, who told her own story of nearly dying from an unsafe abortion, but capped by Texas teenager Paxton Smith.

Smith recently made headlines when she ditched her pre-approved high school valedictorian speech to speak out against SB 8. 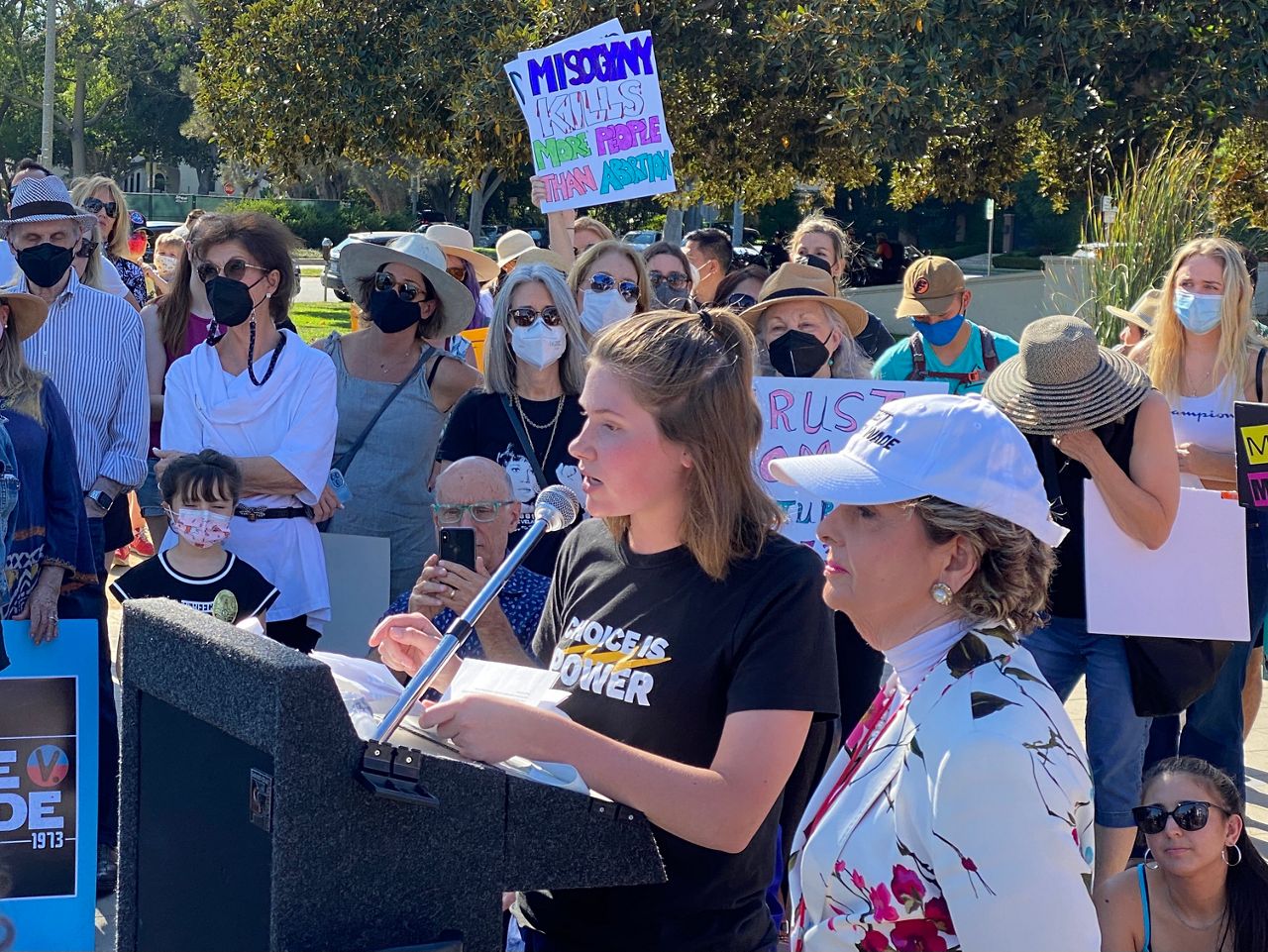 “Before Roe v. Wade, doctor’s hands were tied by belief-based legislation, and they were not allowed to provide abortions. Patients had to take it into their own hands, and as a result, thousands of women died. We cannot, we will not, go back to the days when the only way to end the pregnancy is to risk our lives…we are not vessels for reproduction, we are human beings, and it’s time that we get treated like it,” Smith said. “The principles of this nation are freedom, liberty and equality. When a government oversteps its bounds, when a government turns its back on those principles, we will not stay silent about it.

“Being a patriot is not the same as letting politicians run a field day. Being a patriot is holding this country accountable for everything that it claims to be…today, we are showing the government that we will not stop speaking out against the injustices against us.”