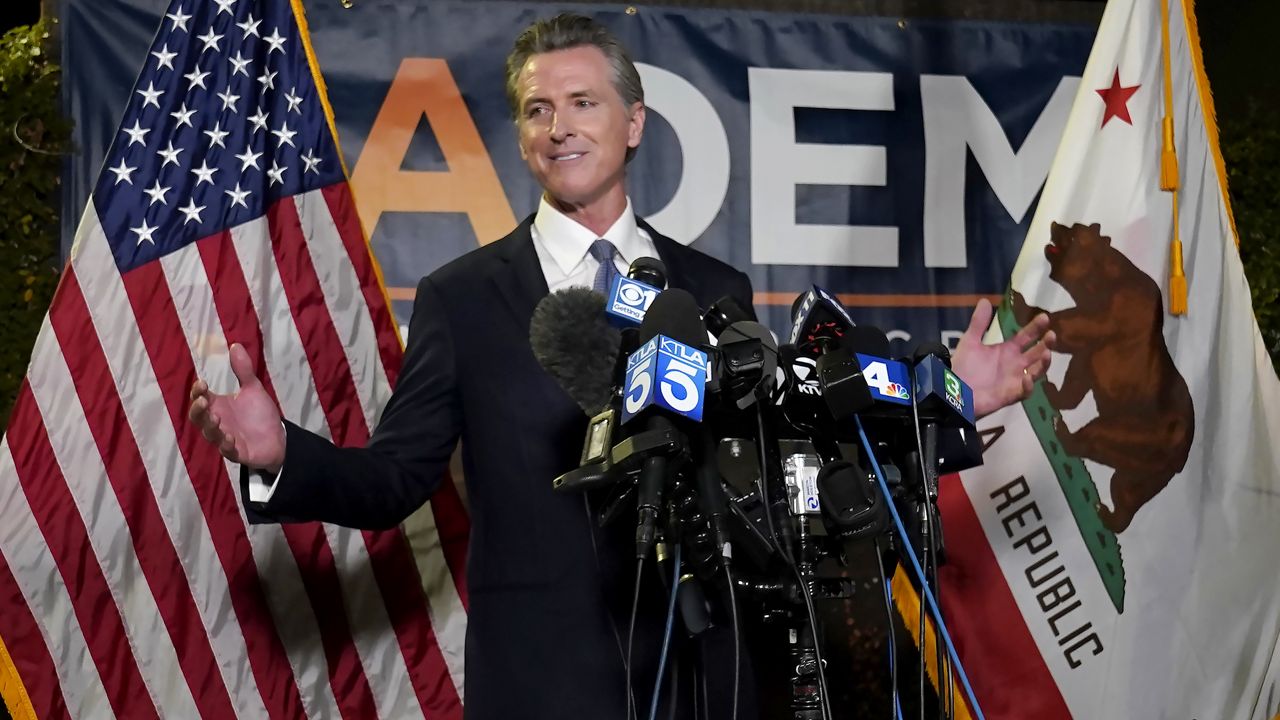 California Gov. Gavin Newsom on Tuesday emphatically defeated a recall aimed at kicking him out of office early, a contest the Democrat framed as part of a national battle for his party’s values in the face of the coronavirus pandemic and continued threats from “Trumpism.”

Newsom bolted to a quick victory boosted by healthy turnout in the overwhelmingly Democratic state. Newsom called it a win for science, women’s rights and other liberal issues, and it ensures the nation’s most populous state will remain in Democratic control as a stalwart for progressive policies. 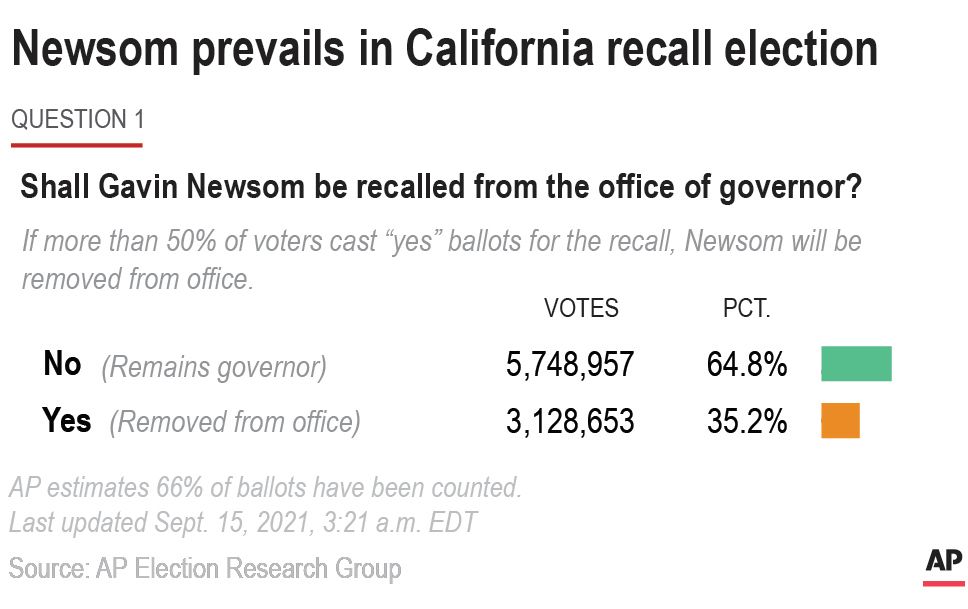 In a statement Wednesday, President Joe Biden, who stumped for Newsom, congratulated the Democratic governor on beating the recall vote, calling it a referendum on their strategy to combat the COVID-19 pandemic.

"This vote is a resounding win for the approach that he and I share to beating the pandemic: strong vaccine requirements, strong steps to reopen schools safely, and strong plans to distribute real medicines — not fake treatments — to help those who get sick," Biden wrote.

"The fact that voters in both traditionally Democratic and traditionally Republican parts of the state rejected the recall shows that Americans are unifying behind taking these steps to get the pandemic behind us," the president added.

With an estimated two-thirds of ballots counted, “no” on the question of whether to recall Newsom was ahead by a 30-point margin. That lead was built on votes cast by mail and in advance of Tuesday’s in-person balloting, with a strong showing by Democrats. While likely to shrink somewhat in the days ahead as votes cast at polling places are counted, Newsom’s lead couldn’t be overcome.

Republican talk radio host Larry Elder almost certainly would have replaced Newsom had the recall succeeded, an outcome that would have brought a polar opposite political worldview to Sacramento. 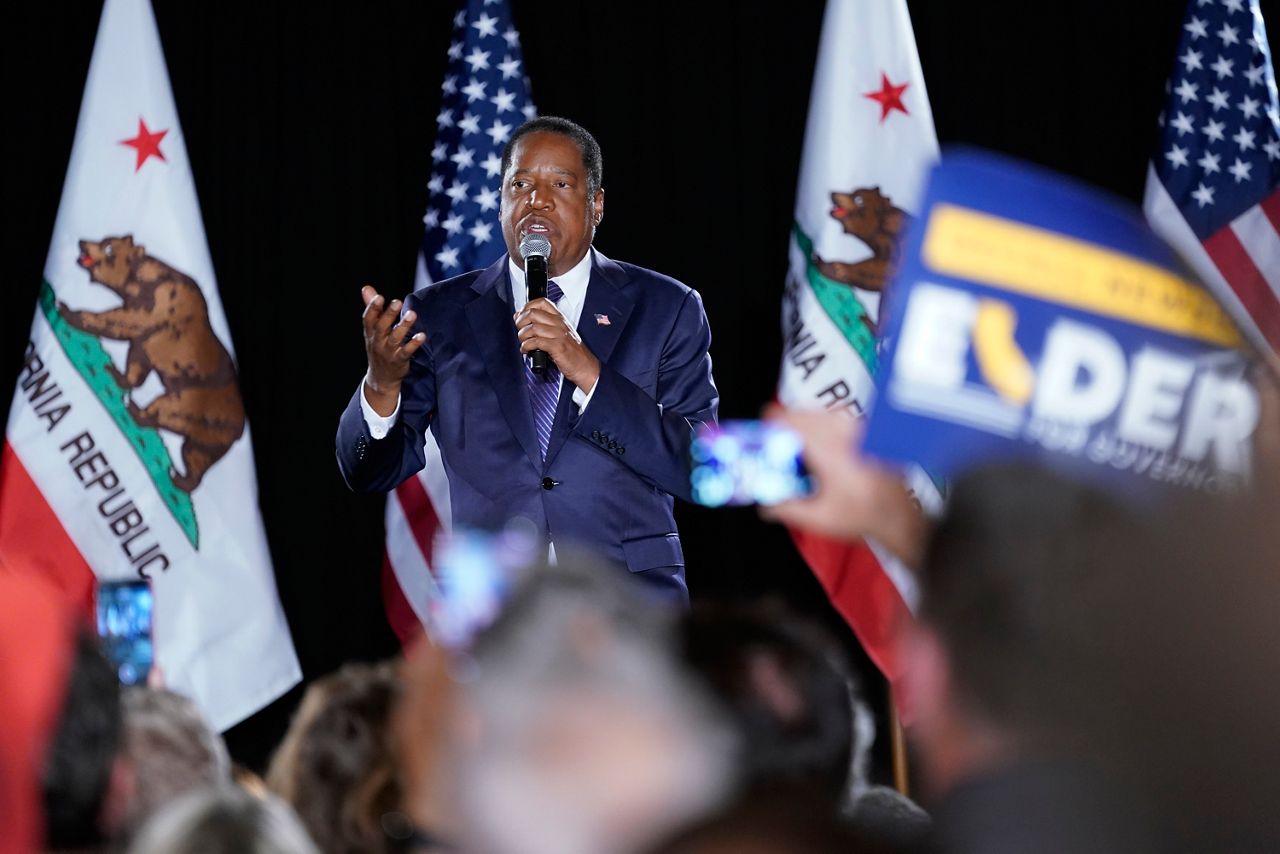 "Let’s be gracious in defeat," Elder said in his concession speech. "We may have lost the battle, but we are going to win the war."

The recall turned on Newsom’s approach to the pandemic, including mask and vaccine mandates, and Democrats cheered the outcome as evidence voters approve of their approach. The race also was a test of whether opposition to former President Donald Trump and his right-wing politics remains a motivating force for Democrats and independents, as the party looks ahead to midterm elections next year.

Republicans had hoped for proof that frustrations over months of pandemic precautions would drive voters away from Democrats. The GOP won back four U.S. House seats last year, success that Republican leaders had hoped indicated revived signs of life in a state controlled by Democrats for more than a decade. 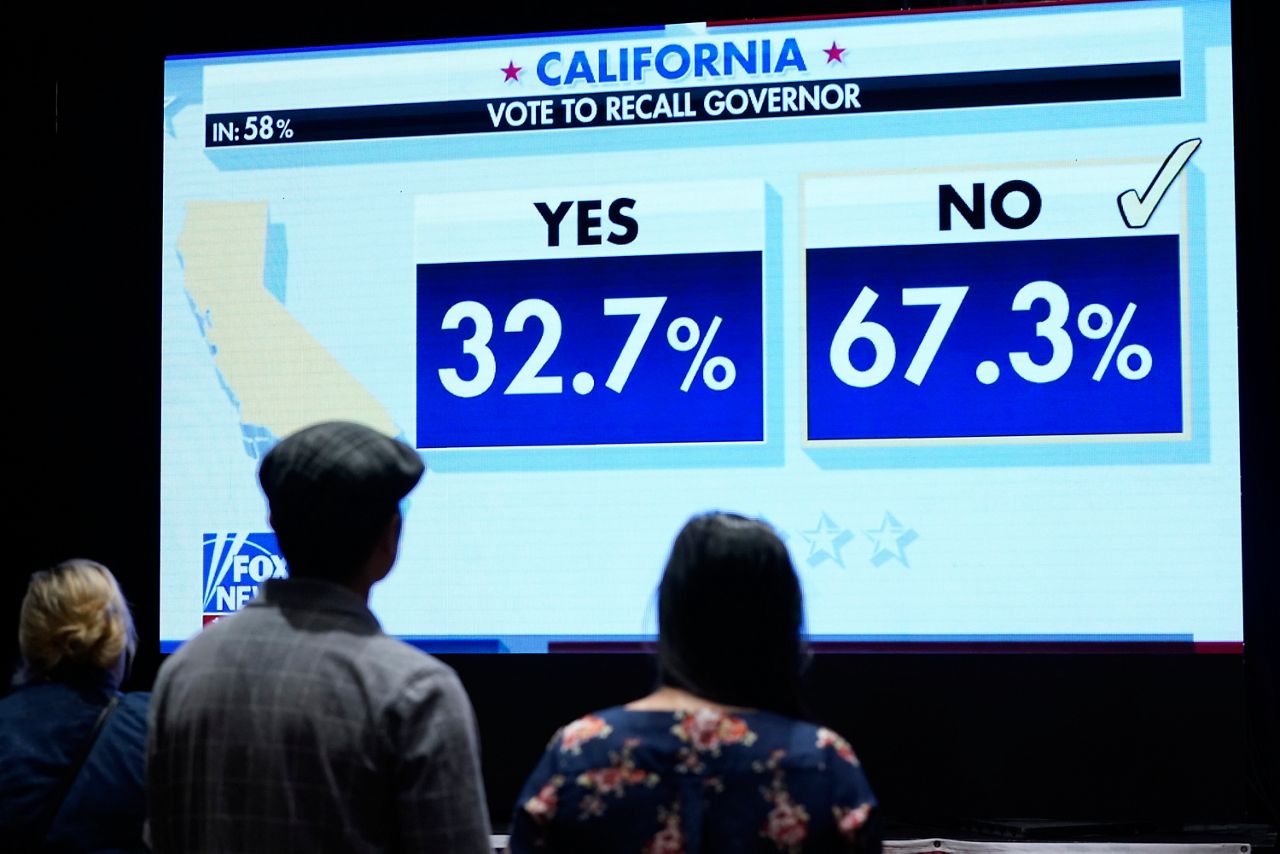 But a recall election is an imperfect barometer — particularly of national trends. Democrats outnumber Republicans nearly 2-to-1 in California, so the results may not translate to governors in toss-up states or reflect how voters will judge members of Congress next year.

Trump, who had largely stayed out of the contest, made unsubstantiated claims that the election was rigged in the closing days, claims echoed by Elder’s campaign. Elder did not mention fraud as he addressed his supporters after the results were in.

“Let’s be gracious in defeat. We may have lost the battle, but we are going to win the war,” he said, later adding that the recall has forced Democrats to focus on issues such as homelessness and California’s high cost of living.

Newsom for months had likened the recall to efforts by Trump and his supporters to overturn the presidential election and a push in Republican-led states to restrict voting access.

“Democracy is not a football, you don’t throw it around. It’s more like — I don’t know — an antique vase,” Newsom said after his win. “You can drop it, smash it into a million different pieces — and that’s what we’re capable of doing if we don’t stand up to meet the moment and push back.”

"We defeated Donald Trump, we didn’t defeat Trumpism," Newsom warned. "Trumpism is still alive, all across this country."

He became the second governor in U.S. history to defeat a recall, cementing him as a prominent figure in national Democratic politics and preserving his prospects for a future run. Wisconsin Gov. Scott Walker, a Republican, survived a recall in 2012.

California voters were asked two questions: Should Newsom be recalled, and, if so, who should replace him? Only a handful of the 46 names on the replacement ballot had public recognition, but most failed to gain traction with voters.

Elder entered the race just two months ago and quickly rose to the top of the pack. But that allowed Newsom to turn the campaign into a choice between the two men, rather than a referendum on his performance.

Newsom seized on Elder’s opposition to the minimum wage and abortion rights as evidence he was outside the mainstream in California. The governor branded him “more extreme than Trump,” while President Biden, who campaigned for Newsom, called him “the closest thing to a Trump clone I’ve ever seen.”

Though the contest didn’t quite bring the circus-like element of California’s 2003 recall — when voters replaced Democratic Gov. Gray Davis with Republican movie star Arnold Schwarzenegger — it featured quirky moments of its own.

Reality TV star and former Olympian Caitlyn Jenner entered the race but gained little momentum and left the state for part of the campaign to film a reality show in Australia. Businessman John Cox, who lost badly to Newsom in 2018, tried to spice up his campaign by hiring a live bear to join him, branding himself as the “beast” to Newsom’s “beauty.”

Newsom will soon be campaigning again; he’s up for reelection next year.

Orrin Heatlie, the Republican who launched the recall effort last year, cast it as a “David and Goliath” battle and said it was telling that Newsom had called on national Democrats like Biden to “salvage his damaged political career.”

The president and other prominent Democrats offered Newsom support in the race’s closing days, while national Republican leaders largely kept the contest at arm’s length.

The recall needed 1.5 million signatures to make the ballot out of California’s 22 million registered voters. It never would have come before voters if a judge hadn’t given organizers four extra months to gather signatures due to the pandemic. That decision came the same day Newsom attended a maskless dinner at the lavish French Laundry restaurant with lobbyists and friends, stirring outcry.

Supporters of the recall expressed frustration over monthslong business closures and restrictions that kept most children out of classrooms. Rising homicides, a homelessness crisis and an unemployment fraud scandal further angered Newsom’s critics.

But the broader public stayed on his side. Polling from the Public Policy Institute of California showed his approval rating remaining above 50% throughout the pandemic. With weeks to go, the institute’s poll showed 60% of Californians approved of Newsom’s handling of the pandemic.

The rise of the highly contagious delta variant led Newsom to frame the race as one of “life or death” consequences. He pointed to Texas and Florida, which were seeing worsening surges as their Republican governors rejected mask and vaccine mandates, as cautionary tales for what California could become.

Newsom has been viewed as a potential White House contender since at least 2004, when he defied federal law to issue marriage licenses to LGBT couples as mayor of San Francisco. His victory maintained those prospects, though he will still have to navigate around the ambitions of Harris, who came up through San Francisco politics alongside Newsom.

He came to the contest with advantages. California’s electorate is less Republican, less white and younger than it was in 2003, when voters booted the Democratic Davis. Newsom was allowed to raise unlimited funds, dwarfing his competitors while flooding TV screens with advertising. Public worker unions and business and tech executives poured millions into his campaign.

Newsom's easy victory will no doubt reignite discussions of recall reform – the election cost an estimated $276 million, per California's Department of Finance.

A $276 million waste just to reaffirm 2018’s results with an election coming in 2022. The CA recall process must be reformed including elevating the Lt. Guv in the event of a recall. But to avoid partisan power grabs the Governor/LG should be a ticket of the same party (like NY).

"The CA recall process must be reformed," he continued, suggesting elevating the state's Lieutenant Governor in the event of a recall.