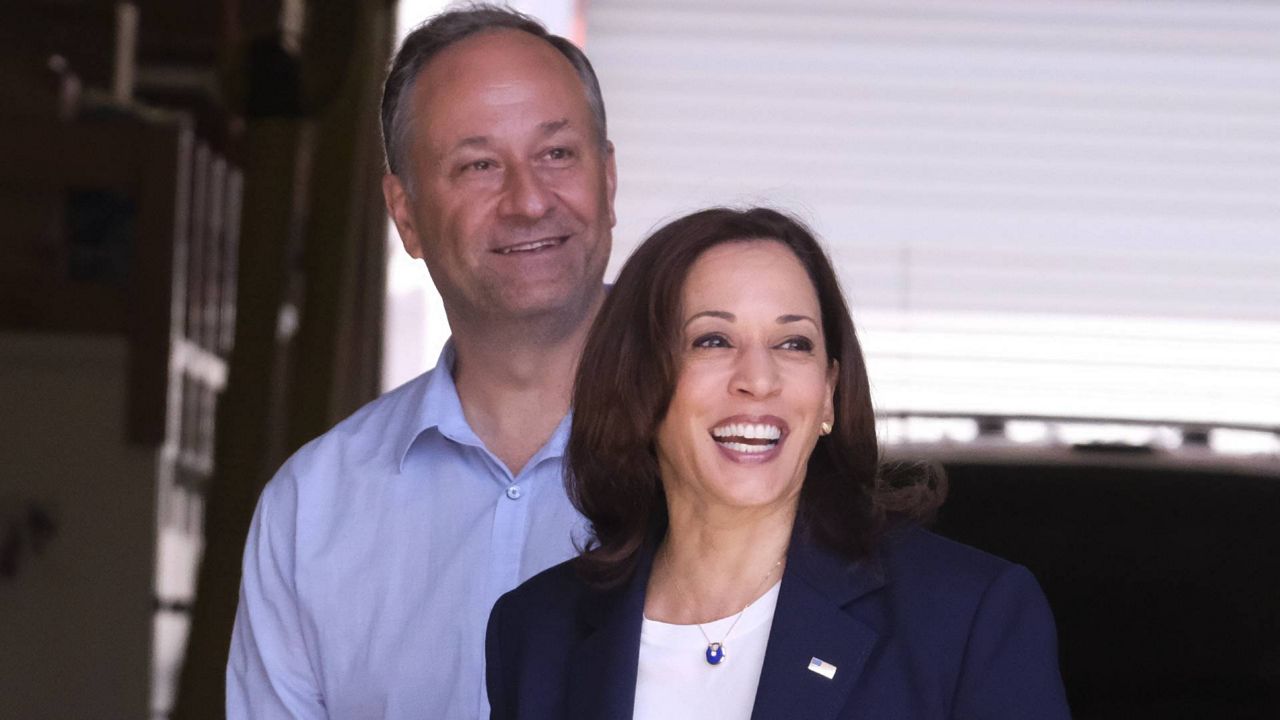 Douglas Emhoff, VP's husband, opens up about being 'second gentleman'

WASHINGTON, D.C. — The U.S. has had first ladies and second ladies for over 200 years, but never a first or a second gentleman — until now.

Mr. Douglas Emhoff, husband of Vice President Kamala Harris, has been the second gentleman of the U.S. for just over six months. This week, he attended events with his wife at the White House to celebrate civil rights laws. Emhoff spoke to Spectrum News about how he’s only in his groundbreaking position due to the successes of his wife.

“Em, nothing prepares you for this, no matter what anyone tells you, nothing can prepare you to step into a role like this,” Emhoff said. “In a lot of ways, almost everything is a surprise, and there are so many unique things that I've been able to do and been able to see.”

Emhoff was thrown into a title that never existed before his wife Harris broke barriers by becoming the first woman to hold national office.

“We were just two people who fell in love, got married, with two careers, and that's what we were just focused on, on our relationship, the children in our family, and not so much on something like this,” he said. “But yeah, I am the first man to do it. And of course, only because we've elected the first female Vice President and my wife, Kamala Harris, but I'm approaching it the way I approach anything. I'm doing a lot of work. I’m redoing a lot of research. I’m doing a lot of preparation and just making sure that whatever I'm doing, I'm getting the word out there in the right way.”

Emhoff emphasized that his role is purely supportive, not advisory. Michele Swers, a professor of American government at Georgetown University, said it appears he’s trying not to overshadow Harris in any way, pointing to how Emhoff has also stopped working as an entertainment lawyer in Hollywood, a job where being aggressive and domineering are par for the course.

“You don't want to emphasize those elements of your personality, so instead, he's taken on the position of teaching a course at Georgetown Law School, which also, a teaching role is a more supportive role. You're supporting students in their learning, which is much different than being in the courtroom,” Swers said.

The women who have previously been second spouses and first ladies have chosen mostly non-controversial issues to champion. Emhoff is doing the same. A review of his official travels by Spectrum News showed he’s visited more than 20 states in six months to address items high on President Joe Biden’s agenda such as healthcare, hunger, and gender equity.

The difference though, Swers explained, is that the public has seen more of the second gentleman than other second spouses at this point in a new administration.

"I think definitely because of COVID-19, he’s out there more, doing a lot of travel, trying to encourage people to get vaccinated, trying to be seen, trying to promote the administration's position on the importance of people getting vaccinated," Swers said. "So as a second spouse, I would say that he probably is more active, and by virtue of being a first, he's getting more media attention than another second spouse might."

At an event this month in Washington, Emhoff visited a high school vaccination site and met with upbeat volunteers who have been spreading the word about vaccines. The biggest cheers came when he mentioned his wife.

“It is hard to believe that it has been about six months since the Biden-Harris administration came into office,” Emhoff said while addressing the crowd. “I’m talking about my friend President Joe Biden, and I’m also talking about my wife Vice President Kamala Harris. She is a good one. I love her, and I know you do too.”

Emhoff's high profile gives him the ability to draw attention to candidates and causes unlike most vice presidential spouses, but that visibility could backfire if he’s the subject of controversy.

“There is always room for mistake and missteps,” Swers said. “From his perspective, I would think that his goal is to not make news. If the first lady is seen as a helpmate, generally people like that, and the same for the second lady and the second gentlemen. When they see them as having political powers that are unelected, then it gets more controversial.”

As Emhoff blazes his way forward, he has a message for men and women.

"To men, I've been saying this repeatedly, men need to step up and make sure that we are doing everything we can to support those that we love," he said. "And not just to do it without showing it, but to actually show it. And it's OK, it's manly, to show those folks that you care about that, you care about them, but do it. Do things that actually are supportive. And to women out there, we need more women in leadership, more women in business and politics and all over the place. And we need those who love them, to love them and support them so they can do that. My role moving forward is what I've been doing, doing everything I can to support my wife in her role as the first female vice president and support the administration, and I'm going to do whatever I can to help."

Emhoff added that his role model for this new title is Dr. Jill Biden, who was an active second spouse under the Obama administration. He said that right now, his focus is on COVID-19 recovery and relief, especially in getting the unvaccinated vaccinated.

Swers said Emhoff’s work now could very well be laying down the groundwork for himself as a future first gentleman, should his wife become president one day.