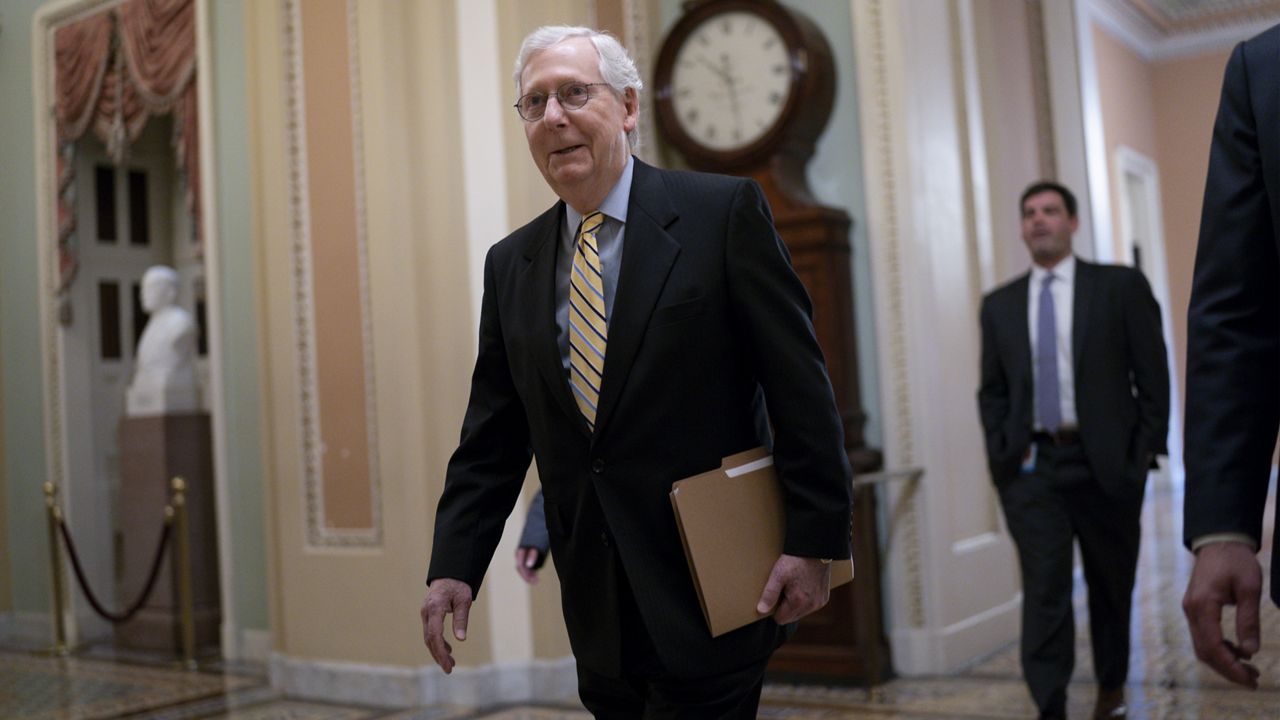 Senate Minority Leader Mitch McConnell, R-Ky., walks to his office as the Senate prepares for a key test vote on the For the People Act, a sweeping bill that would overhaul the election system and voting rights, at the Capitol in Washington, Tuesday, June 22, 2021. (AP Photo/J. Scott Applewhite)

Republicans in the U.S. Senate on Tuesday blocked an expansive voting rights and election reform bill put forward by Democrats in a party-line vote.


With a 50-50 vote, all Democrats in favor and all Republicans opposed, the motion failed, as Vice President Kamala Harris presided over the chamber.

The bill, known as the For the People Act, would touch on virtually every aspect of how elections are conducted, striking down hurdles to voting that advocates view as the Civil Rights fight of the era, while curbing the influence of money in politics and limiting partisan influence over the drawing of congressional districts.

Despite the measure failing, Senate Majority Leader Chuck Schumer celebrated the fact that "we got all 50 Democrats unified behind moving forward on a strong and comprehensive voting rights bill."

"Today, every single Democratic senator stood together in the fight to protect the right to vote in America," Schumer said after the vote, pledging: "This will not be the last time voting rights comes up for debate in the Senate."

Vice President Harris echoed Schumer's sentiments, speaking to reporters after the vote: "The fight is not over."

In a statement released after the vote, President Joe Biden celebrated the fact that "Democrats in Congress unanimously came together to protect the sacred right to vote."

"In supporting the For the People Act and defending the rights of voters, they stood united for democracy," Biden wrote. "They stood against the ongoing assault of voter suppression that represents a Jim Crow era in the 21st Century."

The Democratic president decried the fact that the bill "met a solid Republican wall of opposition" and GOP lawmakers "opposed even a debate — even considering — legislation to protect the right to vote and our democracy."

"It was the suppression of a bill to end voter suppression — another attack on voting rights that is sadly not unprecedented," Biden continued. "The creed 'We Shall Overcome' is a longtime mainstay of the Civil Rights Movement. By coming together, Democrats took the next step forward in this continuous struggle — not just on Capitol Hill, but across the country — and a step forward to honor all those who came before us, people of all races and ages, who sacrificed and died to protect this sacred right."

The president teased that he will have "more to say" on voting rights next week.

"I’ve been engaged in this work my whole career, and we are going to be ramping up our efforts to overcome again — for the people, for our very democracy," he concluded.

Oregon Sen. Jeff Merkley, who introduced the bill, lambasted Republicans for blocking the bill from seeing debate, but pledged that "Democrats are united to protect the right to vote and we're determined to get this done."

BREAKING: Every single Republican just voted to block the For the People Act from even getting a debate. But Democrats are united to protect the right to vote and we're determined to get this done.

Don't give up! Today's vote is just the beginning!

"Don't give up!" Merkley wrote on Twitter. "Today's vote is just the beginning!"

Before the vote, Biden wrote on Twitter that "we can’t sit idly by while democracy is in peril – here, in America."

We can’t sit idly by while democracy is in peril – here, in America. We need to protect the sacred right to vote and ensure “We the People” choose our leaders, the very foundation on which our democracy rests. We urgently need the For The People Act.

Send it to my desk.

"We need to protect the sacred right to vote and ensure “We the People” choose our leaders, the very foundation on which our democracy rests. We urgently need the For The People Act," Biden said. "Send it to my desk."

Many Republicans claim that the measure represents a breathtaking federal infringement on states’ authority to conduct their own elections without fraud — and one meant to ultimately benefit Democrats.

Senate Minority Leader Mitch McConnell called the bill a “a solution looking for a problem” and vowed to “put an end to it.”

Sen. Shelley Moore Capito, a West Virginia Republican, called the bill “a despicable, disingenuous attempt to strip states of their constitutional right to administer elections” that “should never come close to reaching the president’s desk.”

White House press secretary Jen Psaki pledged at a press briefing earlier Tuesday Tuesday that the battle over voting rights, which the Biden White House calls the “fight of his presidency," will continue "long past today."

Psaki added that Biden believes expanding access to the ballot box "should be a fundamental right" for the American people.

Tuesday’s showdown provided a dramatic example of how the filibuster can stall movement in an evenly-divided Senate. Republicans, who see the bill as federal overreach, united in their opposition and denied Democrats the 60 votes needed to overcome the filibuster and begin debate.

Hours before the vote, Sen. Joe Manchin, a moderate West Virginia Democrat who had been the party’s lone holdout, unified Democrats in support of advancing the bill after others in the party agreed to consider changes he had sought.

“These reasonable changes have moved the bill forward and to a place worthy of debate on the Senate floor,” Manchin said in a statement. “Unfortunately, my Republican colleagues refused to allow debate of this legislation despite the reasonable changes made to focus the bill on the core issues facing our democracy.”

The far-reaching proposal, at nearly 900 pages, is viewed by backers as the civil rights issue of the era, legislation that is suddenly of the highest priority after the 2020 election as states impose restrictive new laws that could make it more difficult to vote.

"It takes 60 votes to start that debate. Everyone knows you still need 60 votes to end debate on a bill," Senate Majority Leader Chuck Schumer said Monday ahead of the vote. "So even if Republicans don't like the legislation at end of the process, let them vote against it then. But no, they don't even want to debate it."

“Are you afraid to debate?” Schumer asked. “We’re about to find out."

Months in the making, Tuesday’s showdown over the For the People Act, as it is called, is hardly the end of the road but the start of long campaign ahead.

The Biden administration issued a statement in support of the measure earlier in the day, saying that "democracy is in peril, here, in America."

"The right to vote – a sacred right in this country – is under assault with an intensity and an aggressiveness we have not seen in a long time," the Biden administration's statement continued. "The election of 2020 and its violent aftermath on January 6, 2021, when an armed mob of insurrectionists sought to overturn the voice of the people and a duly certified election, reminds us that our democracy is fragile."

The Biden administration applauded Senators for providing their feedback on the bill and committed to working with Congress in an attempt to "strengthen our democracy."

Since the bill passed in the House months ago, the Biden administration said, "the assault on our democracy has intensified."

"In state after state, new restrictive laws on voting, and efforts to replace non-partisan election administration with partisan processes designed to overturn the will of the voters have become more widespread," the statement read.

"This landmark legislation is needed to protect the right to vote, ensure the integrity of our elections, and repair and strengthen American democracy," the statement continued.

Democrats will continue to fight for voting rights, with some lawmakers calling that right "sacred" and "the foundation of our democracy."

"Congress cannot stand idly by as attacks on the ballot box ramp up nationwide," Georgia Sen. Raphael Warnock said. "This body has a solemn duty to protect the people's voice. We must pass voting rights. No matter what."

The right to vote is sacred—it is the foundation of our democracy. Congress cannot stand idly by as attacks on the ballot box ramp up nationwide. This body has a solemn duty to protect the people's voice.

We must pass voting rights. No matter what. https://t.co/HpqeBzfDs3

The party that controls Washington had been preparing for this moment for months, even as lawmakers faced their own internal divisions over the sprawling bill, which would have removed hurdles to voting erected in the name of election security, curtailed the influence of big money in politics and reduced partisan influence over the drawing of congressional districts.

The rock-solid opposition from the GOP senators brings to a head questions over the filibuster, the decades-old Senate rule that requires 60 votes for most bills to advance.

While some Democrats want to change the Senate's rules to push the elections bill and other priorities past the filibuster, Manchin and others including Sen. Kyrsten Sinema, D-Ariz., are opposed to taking that next move. Biden, too, has said in the past that he wants to leave the filibuster intact.

“The filibuster compels moderation and helps protect the country from wild swings," Sinema wrote Monday in an opinion piece for The Washington Post. She welcomed a full debate “so senators and our constituents can hear and fully consider the concerns and consequences.”

Pressure to change the rule is mounting, though. For now, White House press secretary Jen Psaki said the administration’s hope is that the chamber’s 50 Democrats are aligned and that an unsuccessful vote will prompt the search for a new path.

Ensuring the bill's passage, or the passage of similar legislation, is taking on fresh urgency as former President Donald Trump continues to challenge the outcome of the 2020 election and is urging on the new laws in the Republican-led states.

State officials who certified the results of the 2020 election have dismissed Trump’s false claims of voter fraud, and judges across the country have dismissed multiple lawsuits filed by Trump and his allies. Trump’s own attorney general said at the time there was no evidence of widespread fraud that would change the outcome.

The changes being enacted in many of the Republican states are decried by voting rights advocates who argue the restrictions will make it more difficult for people to cast ballots, particularly minority residents in cities who tend to support Democrats.