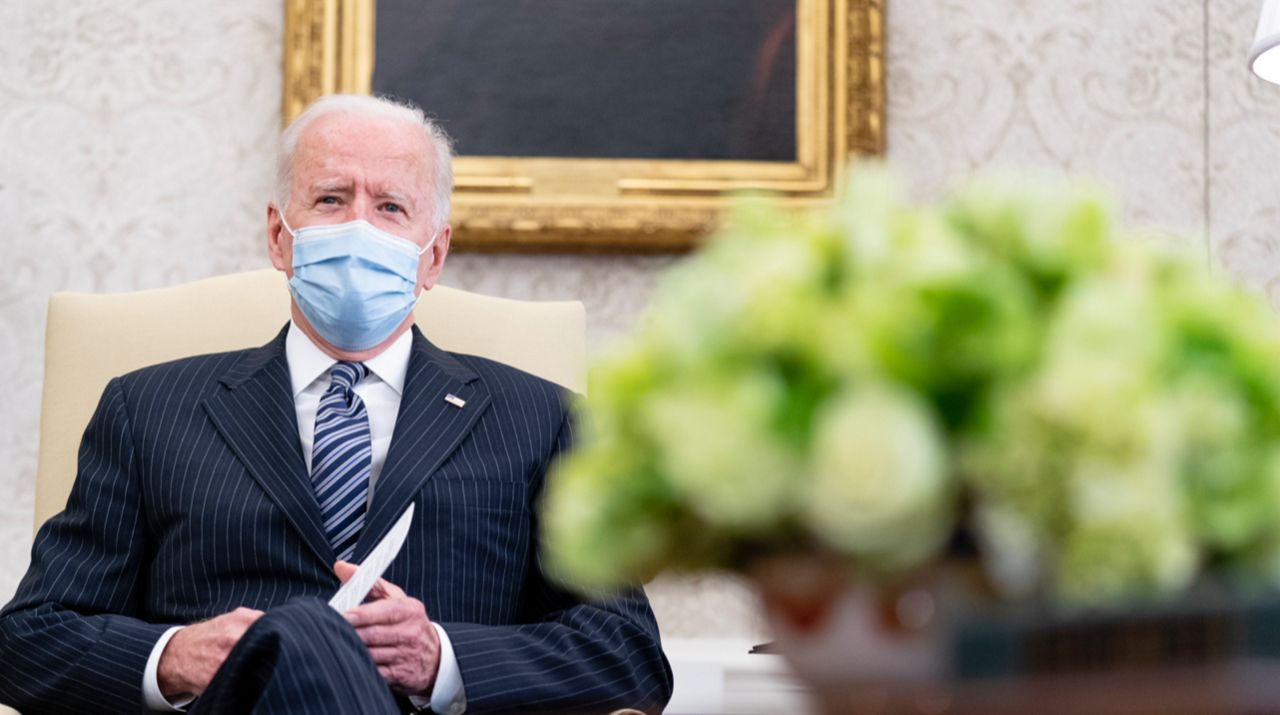 President Joe Biden meets with members of congress to discuss his jobs plan in the Oval Office of the White House in Washington, Monday, April 19, 2021. (AP Photo/Andrew Harnik)

WASHINGTON, D.C. — From day one, President Joe Biden has listed climate change as one of four major crises facing America.

“A cry for survival comes from the planet itself,” Biden said during his Inauguration Day address.

Within hours of taking office, he signed executive orders for the U.S. to rejoin the Paris Climate Agreement and stop construction of the Keystone XL Pipeline.

It comes as the president is pitching a multi-trillion-dollar infrastructure plan that prominently features climate change.

“He's really looking at embedding climate as a larger economic strategy to actually rekindle our manufacturing again and to look at how we grow the clean energy jobs of the future,” McCarthy said in a recent interview.

The infrastructure proposal includes funding for big projects like upgrading the power grid and clean energy research and development, as well as building charging stations for electric vehicles.

In some ways, it’s an expanded definition of infrastructure. And it’s winning praise from experts like Dr. Steve Cohen of Columbus University’s Earth Institute.

“The idea that somehow we should be stuck in the 1930s or 40s or 50s with a definition of infrastructure is ridiculous,” Cohen told Spectrum News.

Biden’s plan has been getting a lot of pushback, though.

Some far-left Democrats insist it doesn’t go far enough, while Republicans in Congress are concerned about the package’s price tag and Biden’s proposal to raise corporate taxes to pay for it.

They argue climate-related issues should be dealt with separately.

“The White House has lumped together a motley assortment of the left's priciest priorities,” Senate Minority Leader Mitch McConnell, R-Ky., said in a recent floor speech.

The plan will likely be amended in parts as lawmakers sit down and craft the actual legislation and Biden negotiates with Congress to get an infrastructure bill passed.

Biden is also looking at new international agreements with leaders from around the world who are participating in this week’s virtual summit — attendees include allies like France and adversaries like Russia.

In an interview, she pointed to a report from the United Nations that calculates the end of this decade as the deadline for actions to prevent a global temperature increase of two degrees Celsius.

“If world leaders do not act and really bring down emissions and really transition their energy, we are looking at a really dire situation,” Yakupitiyage told Spectrum News.

She added that this summit will likely serve as a warm-up to a larger global meeting scheduled for November in Scotland, rather than providing any major resolutions.

Yakupitiyage’s organization also sees this week’s event as an opportunity to put more public pressure on the administration.

“While we're happy that the Biden administration is prioritizing climate, we need them to go further,” she said.

Cohen said it’s still important to show other countries that the U.S. is committed to serious action.

“The good news is at least America is playing a leadership role again,” he said.

With things like the infrastructure package, Biden is hoping to change the way people at home think about climate, as well as prove the steps like investing in clean energy and making buildings more resilient are job creators.

The key will be getting Americans on board to make sure his actions can’t be undone by a future administration.

“These are not just rules that someone can come in and say I'm going to decide against that,” McCarthy, Biden’s climate adviser, said. “This is a combination of efforts that are better for the American public today, tomorrow and for our future in our country.”

Ahead of the summit, Biden’s special envoy for climate, John Kerry, met with Chinese leaders in Shanghai and announced the U.S. and China have agreed to work together to curb climate change.

It remains to be seen what actual steps will be taken.