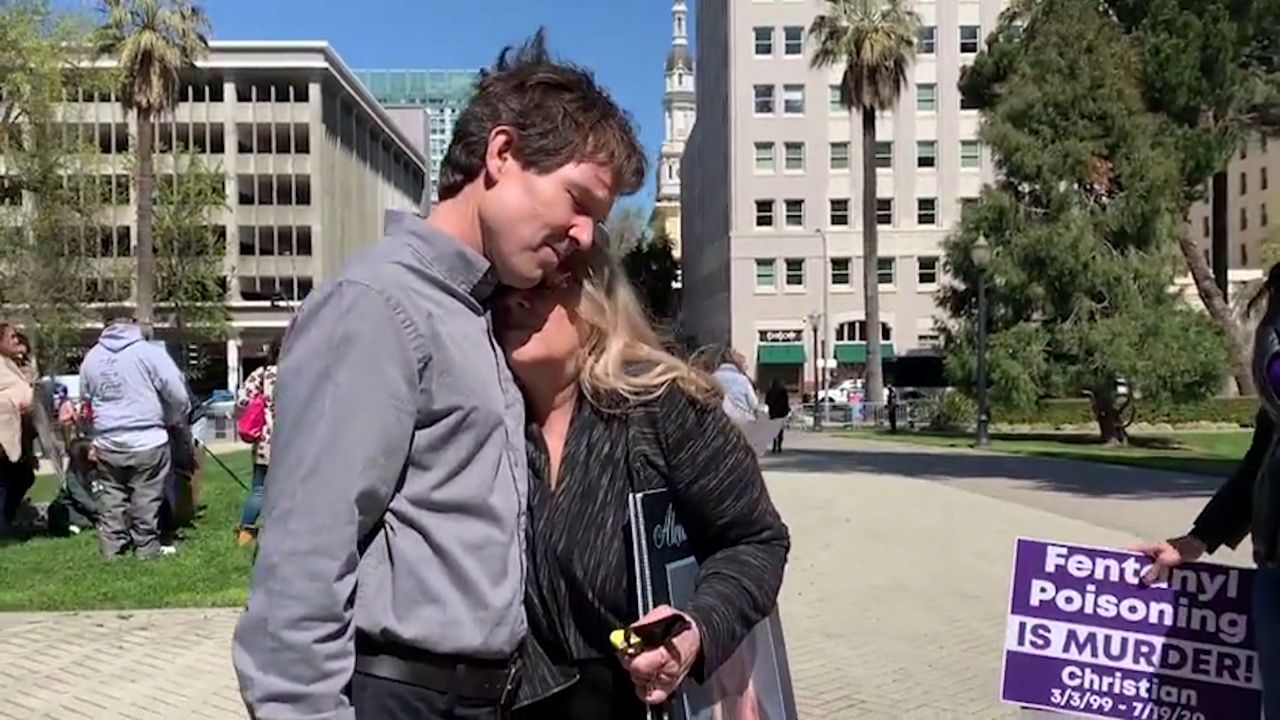 Matt Capelouto hugs his wife after hearing that SB 350 did not pass out of committee.

SACRAMENTO, Calif. — California legislators failed to pass a bill that would have further held drug dealers accountable for their actions on Tuesday. Parents whose children have fallen victim to hard drugs were outraged by the decision.

Senate Bill 350, also known as Alexandra’s law, would have made punishments for drug fatalities equal to those of deaths resulting from drunk drivers.

The Capelouto family helped create the legislation after their daughter Alexandra died from fentanyl poisoning. Matt Capelouto, Alexandra’s father, said he was heartbroken when he heard the bill he had pushed so hard for did not pass out of committee.

“They are voting for drug dealers to be able to poison and murder our children and poison our loved ones,” he said.

His daughter Alexandra was 20-years-old when she bought what she thought was oxycodone. Instead, the pill was filled with five times the fatal amount of fentanyl.

Alexandra’s law would have made it easier to charge the person who sold her the drug with manslaughter.

The bill needed three out of five votes to pass out of the Senate Public Safety Committee, but only received one from Senator Rosilicie Ochoa Bogh (R-Yucaipa).

“The substances that they are selling are dangerous and harmful to human life. We give them a warning before they potentially take somebody’s life, it’s the least we could have done and these senators could not pass the least we could do,” Capelouto responded.

#SB350: A law to hold drug dealers accountable for fatalities.
The bill is also known as Alexandra’s Law named after Matt Capelouto’s daughter who lost her life to fentanyl. pic.twitter.com/ipFX2afUPa

Senator Sydney Kamlager (D-Los Angeles), a member of the committee, said if the bill had passed it would have increased incarceration rates across the state. However, she agreed California needs a solution to the fentanyl crisis.

“These counterproductive over incarceration policies also do not work, how do we find the righteous middle that works for everyone?” Kamlager asked at the hearing.

Capelouto said the fight will continue for him and dozens of other parents who have lost their children to fentanyl.

He said their next step will be to start a ballot initiative and attempt to vote out the senators against the bill.

“The fight’s not over, it’s just beginning. When you’ve lost a child, you’ll go to the ends of the earth, to hell and back to fight for them. I’ll do that until the day I die,” Capelouto said.

Even though the bill did not pass out of committee, legislators could amend the legislation and attempt to move it forward again in the future.