VIRGINIA — From roads and bridges to airports, transit, and energy, the country is literally falling apart.

That's the assessment of the American Society of Civil Engineers 2021 Report Card for America’s Infrastructure, which gives the country a grade of C- overall. Released Wednesday, the report card is the latest call to action for a plan that will rebuild the many systems the country relies upon to protect public health and safety and propel the U.S. economy.

“The disinvestment in infrastructure that's been going on frankly for a lifetime is catching up to us,” U.S. Department of Transportation Secretary Pete Buttigieg said during the ASCE report card briefing. “There are trillions at stake in economic productivity over the next years if we don’t act and invest.”

Such investments fit with the Biden administration's Build Back Better plan to create millions of good-paying jobs that last, and to combat climate change and social inequities at the same time. It’s a two-step plan, Buttigieg added. The first is passing the $1.9 trillion rescue package now being debated in the U.S. Senate, after which the Biden administration will shift its focus to economic recovery.

“Everybody will find their ability to lead a meaningful life depends on the infrastructure available to them,” said Buttigieg. “If what brings meaning to your life is an ambitious idea to start a business, you won’t be free to work on that if you can’t get a glass of clean, safe drinking water out of the tap. If the meaning of life for you is getting through school and there’s not a road to get you there safely, that will stand in your way. This can be a matter of life and death, and it can certainly be a matter of prosperity or its opposite.”

Without investing in the underlying systems that make American life possible, each U.S. household stands to lose $3,300 annually for the next 20 years due to under-performing infrastructure, the ASCE said.

“That’s money we lose when we throw out food spoiled by a power outage. It’s lost productivity waiting for the subway or sitting in traffic simply because other choices aren’t available. It’s paying more for groceries as the cost of goods increase because of under investment in our freight system,” said Kristina Swallow, chair of the ASCE’s Infrastructure Report Card committee.

The country’s oldest national civil engineering organization, the ASCE has been releasing its infrastructure report card every four years since the 1980s to reflect the condition of more than a dozen types of infrastructure, as well as their funding, resilience, and future needs. While the C+ the ASCE gave the country’s infrastructure this year is a slight improvement from the D+ it earned in 2017, there is still a long way to go.

“On average, our infrastructure is still in mediocre condition and requires attention. We are moving in the right direction and we’ve made modest improvements, but overall, the long-term infrastructure investment gap continues to grow,” said Swallow, adding that the gap has grown from $2.1 trillion in 2017 to $2.6 trillion today.

Following are the grades and explanations for all 17 categories in the 2021 Report Card for America’s Infrastructure:

COVID has lowered airport passenger volumes, but when they return, the terminal space and gate availability will be strained yet again. Even before the pandemic, the aviation system faced a ten-year, $111 billion funding shortfall. COVID has only exacerbated the problem, reducing the revenue streams that rely on passenger fees to fund airport infrastructure.

Forty percent of the roads in the U.S. are in poor or fair condition, causing the average U.S. motorist to spend $1,000 a year on wasted time, fuel, and repairs.

There are 617,000 bridges in the U.S, but more of them fall from good to fair condition every year. Almost 8% of bridges are structurally deficient, yet those structurally deficient bridges still see 178 million crossings per day. At the current rate of investment in bridges, it would take until 2071 to catch up on the repairs that are currently needed. 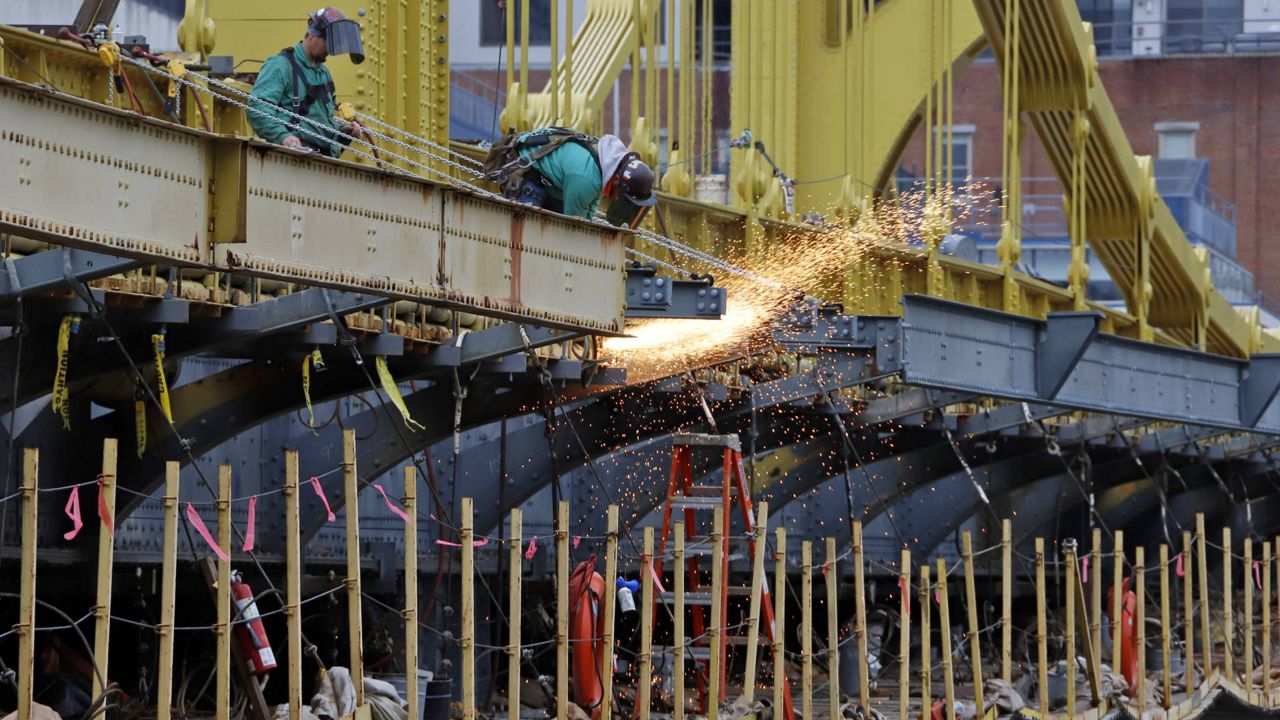 In this May 6, 2020 file photo, a worker welds on the Ninth Street bridge in Pittsburgh. (AP Photo/Gene J. Puskar)

There are more than 91,000 dams across the country, 2,300 of which are considered “high hazard” in need of upgrades and repairs.

The national levee database contains about 30,000 miles of levees, but there could be as many as 10,000 more miles of levees that are undocumented. The construction of homes, businesses, and schools rely on safe levees, yet the risk of them failing during a flood is increasing.

While utilities across the country are taking steps to strengthen the power grid, reliability is an issue that requires more investment and maintenance. Severe weather events are the predominant cause of power outages, requiring existing distribution infrastructure to be rebuilt to withstand modern storms.

There are more than 12,000 miles of navigable waterways within the country that serve as a sort of marine highway for agriculture, petroleum, and other bulk goods on barges. But unscheduled maintenance outages caused 5,000 hours of delay for shippers between 2015 and 2019. With many of the country’s locks and dams built in the 1930s and ‘40s, they are long overdue for repairs and rehabilitation projects to modernize them.

Many of the investments at U.S. ports are geared towards capacity and efficiency enhancement  to keep them globally competitive and attract increasingly larger cargo ships. While investments at the federal and individual port level have increased, there’s still a large need for funding for smaller inland ports.

Public transit is essential so people can access jobs, school, healthcare, and shopping, yet 45% of Americans have no access to transit, and the transit systems that do exist are aging and falling out of repair. Many transit agencies lack sufficient funding to do even basic maintenance: 36% of storage yards and maintenance facilities are in poor condition, and 19% of all vehicles are in poor condition. There is currently a $176 billion transit investment backlog, and it’s growing annually, hurting the economy by increasing congestion and limiting access to jobs. 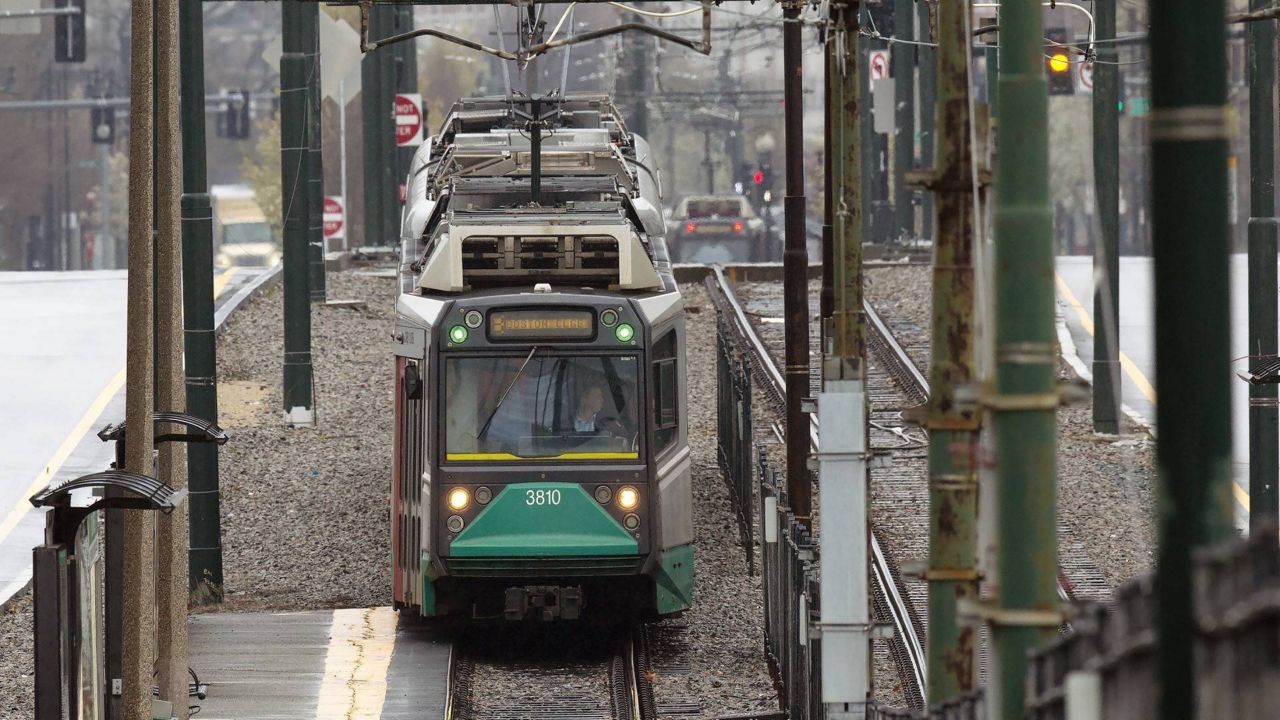 Private railroads are investing close to 20% of their revenue in infrastructure, averaging over $260,000 per mile annually over their 140,000 mile network. But passenger rail, primarily Amtrak, relies on federal support to cover infrastructure needs that passenger revenues alone do not support. In 2019, Amtrak moved 32-½ million riders, but infrastructure-related issues caused 328,000 train delay minutes. To bring all passenger rail infrastructure into good repair would cost more than $40 billion.

On average, the nation’s more than 16,000 wastewater treatment plants are functioning at 81% of their design capacities, but 15% of them have reached or exceeded their capacity. Large-scale capital improvements to systems that are experiencing sanitary sewer overflows have slowed in recent years, but as many wastewater treatment plants and collection networks approach the end of their lifespans, their operation, maintenance, and replacement will become more costly.

While stormwater utilities are on the rise, impervious surfaces in cities and suburbs are also expanding, exacerbating urban flooding. Stormwater also affects water quality when polluted runoff from pavement enters bodies of water. The ASCE found that nearly 600,000 miles of streams and rivers are considered impaired, yet more than 70% of communities don’t have a dedicated funding source to address these needs. Federal funding provides about $250 million annually, but the funding gap is $8 billion.

Every two minutes in the U.S. there's a water main break somewhere. Every day, the country loses enough treated water to fill 9,000 swimming pools. While federal programs and utility investments are funding 12,000 miles of new pipe each year, operation and maintenance costs are a challenge for many water utilities.

The average American generates 4-1/2 pounds of waste per day – half of which ends up in landfills; 25% is recycled, 10% is composted, and 13% is combusted for energy. But waste management systems are facing serious challenges, with a plateauing rate of recycling, emerging contaminants in landfills, and changing global markets, necessitating a national plan for waste infrastructure.

There are about 1,300 superfund sites in the U.S. where cleanup activities are either incomplete or have not yet begun. And climate change is going to make hazardous waste site remediation more challenging. Without investment in hazardous waste site cleanup, Americans will be living with the threats they pose for generations.

Schools are burdened by the need to replace HVAC systems, the heavy use of portable classrooms due to capacity issues, and buildings that are in fair or poor condition. Yet state funding for schools was down 30% from 2008 and 2017. The ASCE estimates there’s a minimum annual funding gap for public school facilities of $38 billion.