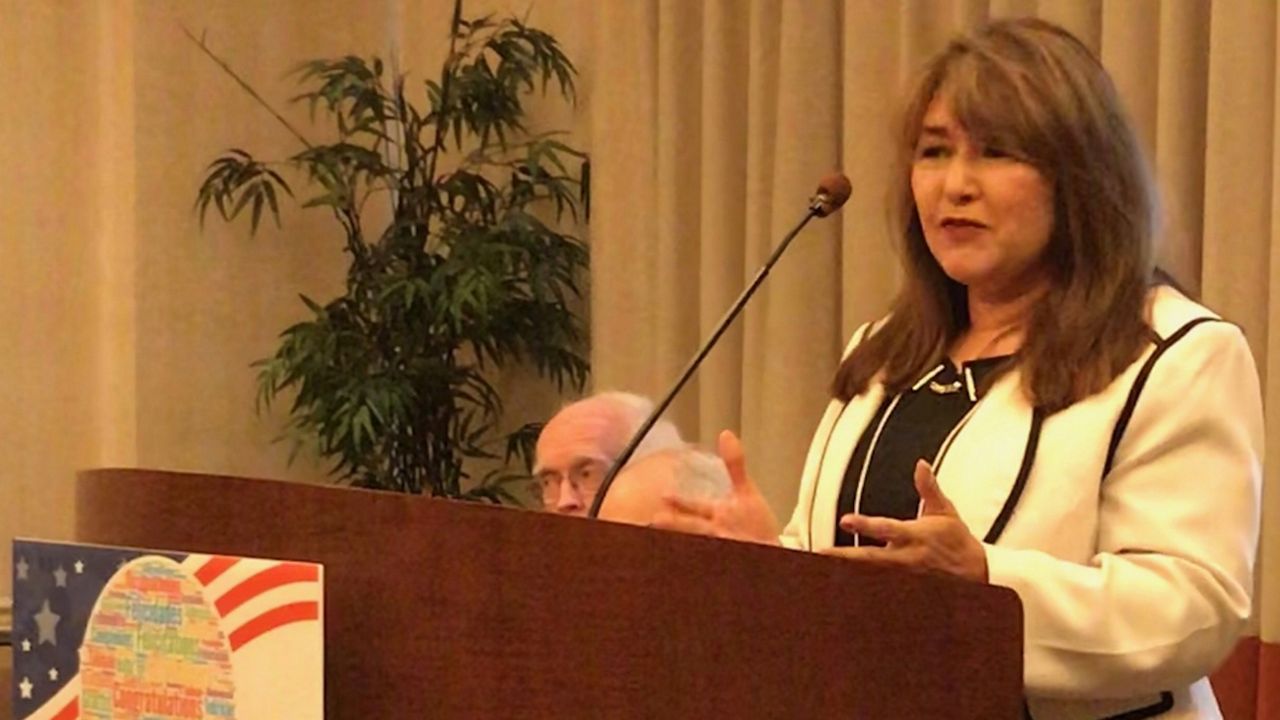 EDITOR'S NOTE: This is a collaboration between digital journalist David Mendez and multimedia journalist Timothy Parker. To watch the video report accompanying this story, please click the arrow above.

WHITTIER, Calif. — Whittier Council Member Jessica Martinez said that attending the “Stop the Steal” rally in Washington, D.C. on January 6 was “like being with your neighbors…it was all about caring for America.”

But she said that she couldn’t have anticipated the violence at the U.S. Capitol building that followed President Donald Trump’s rally speech.

Two of her colleagues on the Whittier City Council felt that wasn’t good enough and moved to officially rebuke Martinez via censure at the council’s January 12 meeting.

The effort ultimately failed, with a 2-3 vote. But the discussion — which was spurred in part by a petition seeking Martinez’s removal — highlighted the toll that national politics has taken on local politics.

“It isn’t pleasant to call out one of your council members. That’s the first time in my almost-three years (on City Council) that I’ve had to do that,” Council Member Henry Bouchot, Martinez’s most prominent critic, said in an interview.

On January 6, Martinez posted a 15-second long video to her Twitter account. It was short, silent, and shaky, but it was apparently posted from the rally supporting Trump’s assertion that he won the 2020 election.

He did not. Democratic nominee Joe Biden won 26 states, 306 electoral votes, and 51.4 percent of the popular vote to become the next President of the United States. But at the rally, Trump insisted that his victory was “stolen” by Democrats and the media. He told his supporters that “you’ll never take back our country with weakness. You have to show strength and you have to be strong.”

Within hours, hundreds of rally-goers turned into rioters. They stormed the Capitol building, forcing members of Congress to take shelter, and vandalized the facilities. Five people died, including one Capitol police officer.

Weeks before the rally, Martinez repeatedly posted via Twitter (@JessicaFor57th, a relic of her losing run for California Assembly) that she would be in D.C. on January 6. Other tweets supported unfounded voter fraud conspiracies, as well as statements agreeing that whistleblowers and media members are "traitors” and should be arrested for treason.

At the January 12 city council meeting, Martinez said that she was not present for the violence at Capitol Hill. By the time the riot started, she said, she was on her way back to Los Angeles.

That wasn’t good enough for Dutra or Bouchot. A file of Martinez’s tweets was submitted into the city’s record and read aloud at the meeting. Those, combined with her presence at the rally, were enough for Dutra to seek her censure. Her actions, he said, were “unbecoming of a council member.” Bouchot said that Martinez’s actions promoted “baseless theories and undermined faith in a free and fair election.”

During the discussion, Bouchot repeatedly pressed Martinez on her views from theories of voter fraud to questioning Martinez’s use of prescription medicines to prevent contracting COVID-19. Mayor Joe Vinateri eventually stepped in, stating that the questions had gone “afield.”

Council Member Cathy Warner chided Martinez, saying that she should consider putting her political opinions “in abeyance” while she serves on the City Council.

Vinateri scolded both Martinez and Bouchot, saying that the residents of Whittier “need (the council’s) leadership and our undivided attention. Both of you seem oblivious to that.”

Vinateri said that a distinction must be made between conduct and speech — and that Martinez’s opinions didn’t rise to the level of censure because he couldn’t see how they affected voters.

But the council, as a body, stopped short of official censure. Vinateri and Warner joined Martinez in voting down the final motion.

Martinez’s vote wasn’t a conflict of interest, according to Whittier City Attorney Dick Jones, based on his research of precedent. Jones also noted that a vote in favor of censure would not have imposed legal sanctions on Martinez. Martinez’s future, Vinateri suggested, is up to the voters.

In an interview, Martinez said that she will “try to keep out of” social media platforms in the future. She’s previously been accused of posting racist and Islamophobic tweets, based on criticism of U.S. Sen. Elizabeth Warren and Rep. Ilhan Omar.

Martinez continues to believe the election was questionable, despite there being no evidence of widespread voter fraud. She also believes that Bouchot (whom she repeatedly referred to as “the liberal” during the interview) was trying to “make a name for himself” with the censure motion.

“It was very irresponsible, very damaging to the community and to myself,” Martinez said, saying she has been a victim of crime and threats. “I lay this at the feet of my fellow council member. All he had to do was call me…I would have said I was on my way to the airport.”

Bouchot said he believes this shouldn’t have been a partisan issue and that he would have moved to censure anyone, regardless of party, had they acted the same way.

“Voting not to censure Jessica Martinez is saying that storming Whittier City Hall and demanding to overthrow our elected officials…is an acceptable form of free speech,” Bouchot said.

He said he’s looking forward to seeing what the voters decide.

“I think they know the difference between what’s right and wrong,” Bouchot said. “I don’t think they can expect much from the council majority that defended Jessica.”

Any real impacts against Martinez would have to be initiated by voters at the ballot box — either in 2024, when her term ends, or sooner, via recall.

According to the Whittier City Clerk’s office, there has not yet been a notice of intent filed for Martinez’s recall. But people, they said, have inquired.