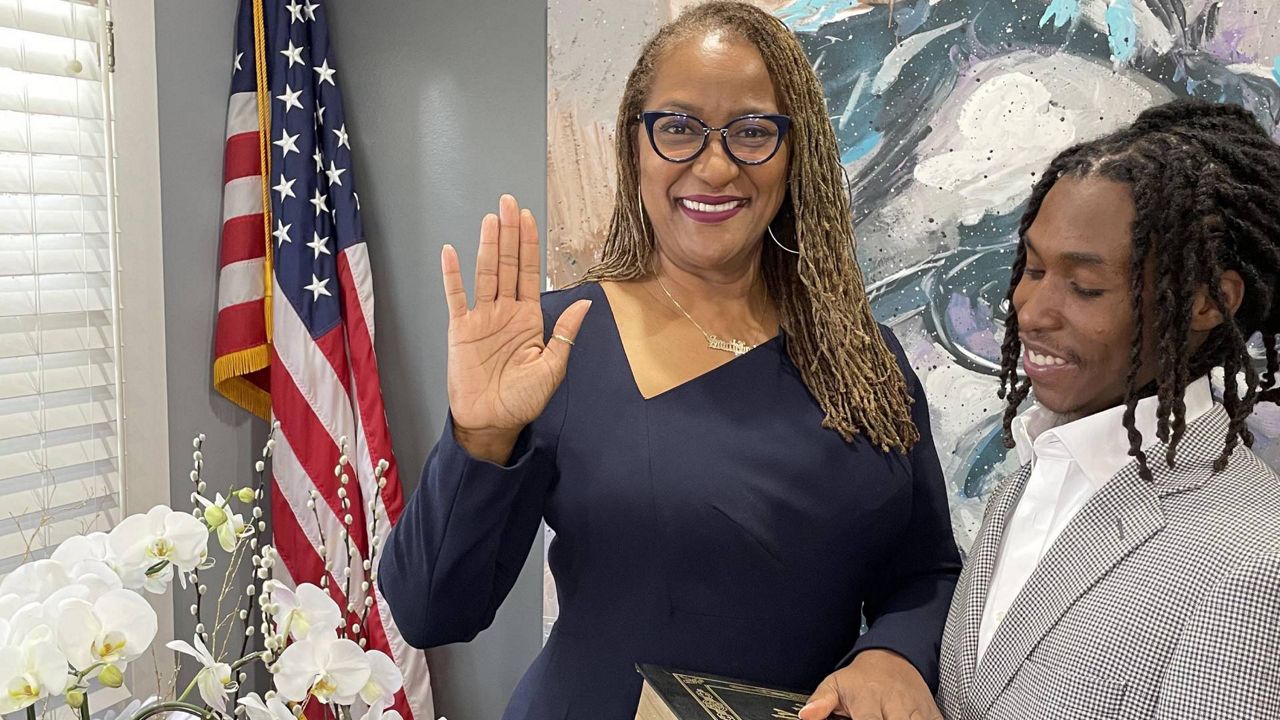 Supervisor Holly Mitchell gets sworn in on December 6, 2020. (Courtesy Los Angeles County Board of Supervisors)

LOS ANGELES — These days you can find former county board of supervisor Gloria Molina at her sewing machine.

Whether it’s making a quilt or making masks, her longtime hobby of sewing has become her therapy.

"So when I was a supervisor, I used to come home and sometimes I had a very rough day, and after dinner and everything, 9:30-10:00, I’d go to my machine and sew for a couple of hours," said Molina, who was the first Latina to join the Los Angeles County Board of Supervisors in 1991, where she served the first district for more than two decades.

Throughout her tenure, Molina spent many years as the only woman on the board and, as she explained, sometimes her male peers wouldn’t take her seriously.

"A man in this position of power, they’re very accustomed to dealing with other men, and very frankly, I don’t know if they’re necessarily prepared to deal with women," said Molina. "And when they do, they treat them as their daughters or their wives."

The board has been around since the 1800s, and for the majority of its time has been male-dominated. But the gender demographics are changing.

For the first time, the Board is completely female with Holly Mitchell elected to the District 2 seat in November. She joins an experienced group of women that hope to tackle many challenges facing the county.

The Board is the most significant office in L.A. County and largest local legislative body in the entire country, representing roughly 10 million people and managing a budget of nearly $35 billion.

Fernando Guerra, director of the Center for the Study of L.A. at LMU, explained how five women in this role sends a powerful message.

"Symbolic changes with five women being on there, but more importantly, substantive changes with women really emphasizing much more collaboration, much more social services," said Guerra.

Guerra added that it’s the first time in state history where any of the 58 counties have an all-female representation, and that trend is growing.

"Not only here in L.A. County but throughout the country in Congress, in State Legislatures, in governorships even is the increasing number of women who are holding office and holding significant offices," he said.

But Study L.A.’s data also shows women have a hard time maintaining representation once its captured, finding no cases where a woman has held onto the same seat three times in a row.

"Once a woman captures a position, there is no guarantee and the actual percentages fall back to the norm in terms of who will replace that woman," said Guerra.

But despite the data, this is a big moment for the County Board of Supervisors.


When Janice Hahn was elected to the board in 2016, she became the fourth woman with a seat at the table. Now that all seats are female, she’s honored to have this first-in-a-lifetime chance.

"I knew it was going to be momentous, it was history-making, and that a lot of people would look to us as sort of a model of what new government looks like," said Hahn.

While all five are veteran politicians, they'll all face mounting pressure for some of L.A.’s biggest challenges: fiscal decisions related to the budget, reimagining public safety, the homeless crisis, and getting us out of the pandemic's dark ages.

"We are there to keep people from falling through the cracks, people who have reached the end of their rope — financially, emotionally, physically, mentally," said Hahn.

She believes women govern differently than men, and together they have an opportunity to lead from their perspective and become a model for the rest of the country.

"Certainly a different set of life experiences, which I do think help mold our thinking and our thought process in terms of policy decision," said Hahn.

While Molina has stayed out of politics in retirement to focus on philanthropy, she would have loved to have had a chance to serve with all women.

"I just think it would’ve been wonderful, such tremendous pride, to have worked with so many, particularly, this crew of women, who are so talented, so capable, and experienced leaders," she said.

While the board has the chance to show the world what women can accomplish together — and in unprecedented times — it’s clear their term is starting out unified, and all eyes will be on this fabulous five.