The Sunset Strip is bereft of cars and pedestrians at night as stay-at-home orders continue in California due to the coronavirus outbreak, Wednesday, April 1, 2020, in West Hollywood, Calif. (AP Photo/Chris Pizzello)

WEST HOLLYWOOD, Calif. — From the Whiskey A Go Go to the Chateau Marmont, West Hollywood and its famed Sunset Strip are as legendary as the celebrities that put it on the map.

Yet for all its glamour and vibrancy, the area has not been immune to COVID. More than a third of the jobs in the two-square-mile, independently-governed city are in accommodation, food services, and retail, many of which have been forced to radically reimagine their businesses as a result of the ongoing pandemic.

“We’re embarking on a new life cycle for the city,” said West Hollywood Mayor Lindsey Horvath during Tuesday’s virtual State of the City presented by West Hollywood in partnership with its Chamber of Commerce.

Thirty-six years after its founding, West Hollywood, like so many other parts of the city, reeling from a COVID-induced economic crisis, but it is also embracing demographic, infrastructural, and cultural changes that were already underway.

"It's a big shift," Horvath acknowledged during an event that looked at the city's new initiatives, economic trends, and innovations. "In the face of all this change, I say, 'Keep calm and stay WEHO.'"

On December 7, West Hollywood will replace half of its city council members when it swears in two replacements voted into office last week.

The LGBTQ+ community is growing, and people under 40 are getting more engaged in the work of the city, she said.

Because of COVID, West Hollywood revenues are expected to decline $30 million this fiscal year, which is why the City Council put Measure E on last week's ballot. Seventy-three percent of the city's voters approved of the measure that increases sales tax for local businesses from 9.5% to 10.25%.

Measure E is expected to generate between $9 and $11 million annually.

“This is a critical resource for the city,” Arevalo said, adding that Measure E monies will be used to help West Hollywood recover from COVID by preventing cuts to programs that protect public health and that help local businesses and community members.

While businesses of all kinds have been hurt by COVID, hotels, in particular have suffered. Almost all of the hotels in West Hollywood closed in the spring, according to Tom Kiely, president and chief executive officer of West Hollywood Travel+Tourism.
While all of the hotels have since reopened and business is beginning to pick up, it’s at “a very slow pace,” he said. He doesn’t expect business to see significant improvement until the second half of 2021.

Still, there are a handful of new developments in the works.

Opening January 15 on the former site of the House of Blues music venue, the Pendry Hotel is a multi-use property that will include a 149-room hotel facing Sunset Blvd., 40 residences in separate buildings behind it, some of which will have private swimming pools and outdoor kitchens.

The property will also have a live entertainment venue, screening room, bowling alley, and a pair of restaurants operated by celebrity chef Wolfgang Puck, who got his start on the Sunset Strip with Spago in 1982. 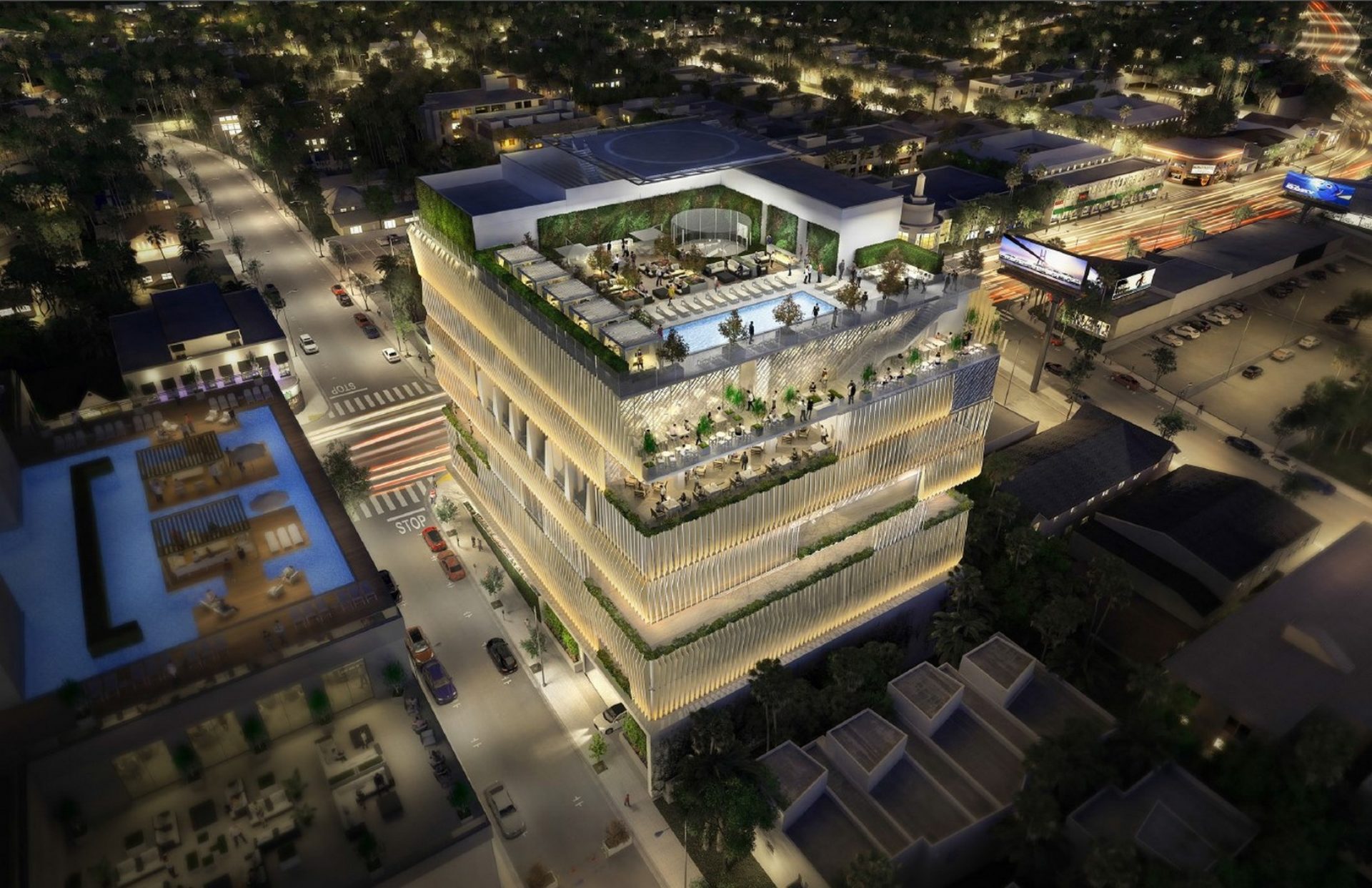 The Robertson Lane project is currently under construction.

The nine-story hotel will be located at 661 Robertson Blvd., off Santa Monica Blvd., and will have 237 rooms, as well as shops, restaurants, an event center, and a night club. The design features a diagonally-oriented pedestrian plaza that will connect La Peer Drive to Robertson Blvd.

Backed in part by actress Gwyneth Paltrow, Britain’s members-only Arts Club is currently in plan check with the city. Situated on the Sunset Strip at Hilldale Avenue, the building will be a combination office space and private club, with retail, restaurants, a public art gallery, and a small hotel. 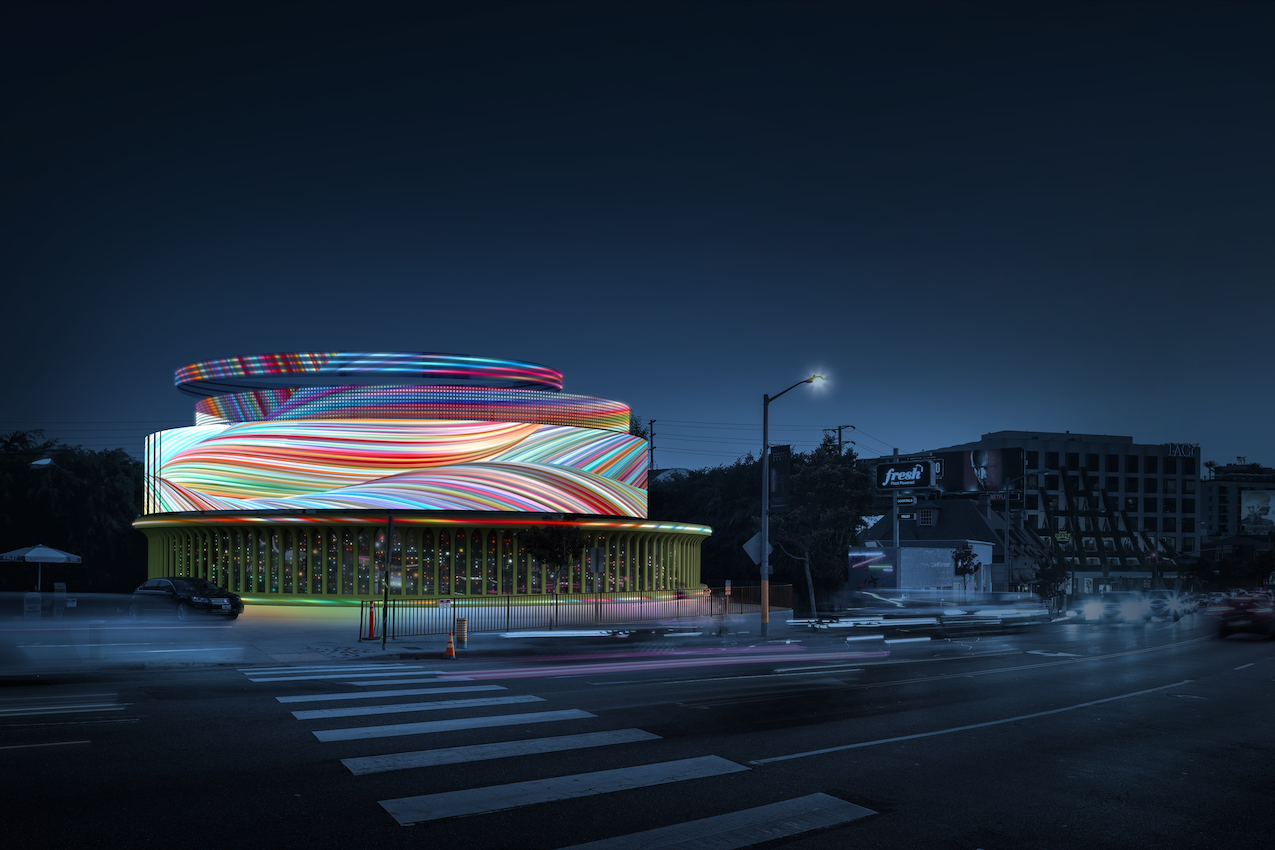 The Sunset Strip may be best known for its hotels, but it is also home to the densest outdoor advertising landscape on the West Coast. That landscape is about to get even more dense – and digital.

As part of the Sunset Arts & Advertising Program West Hollywood launched last year, the city will bring 21 digital signs to the strip.

Designed to “look at billboards as a much more creative resource than just a billboard,” Arevalo said, the new digital program aims to present ad content as its own form of art.

Tuesday’s event showcased a handful of the new signs. The Invisible Frame billboard at 8743 Sunset uses digital edging to blend into the environment, creating the illusion that it’s floating above the Constance Bennett building that serves as its anchor.

The Mutato Muzika billboard at 8760 Sunset sits atop the green forum building, showcasing digital art as well as advertising. 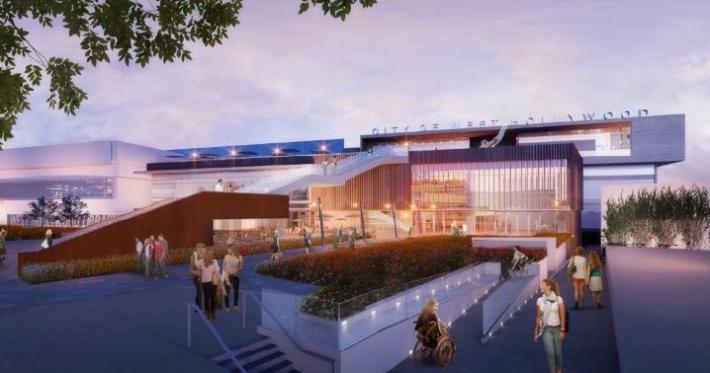 Off the strip, in the central part of the city, the West Hollywood Park Project is 80% complete, Arevalo said, adding that it is on track to be finished at the end of next summer.

The park is being updated to include a new aquatic and recreation center that will have two rooftop swimming pools and courts for basketball, volleyball, and dodgeball, all of which will be open to the public.