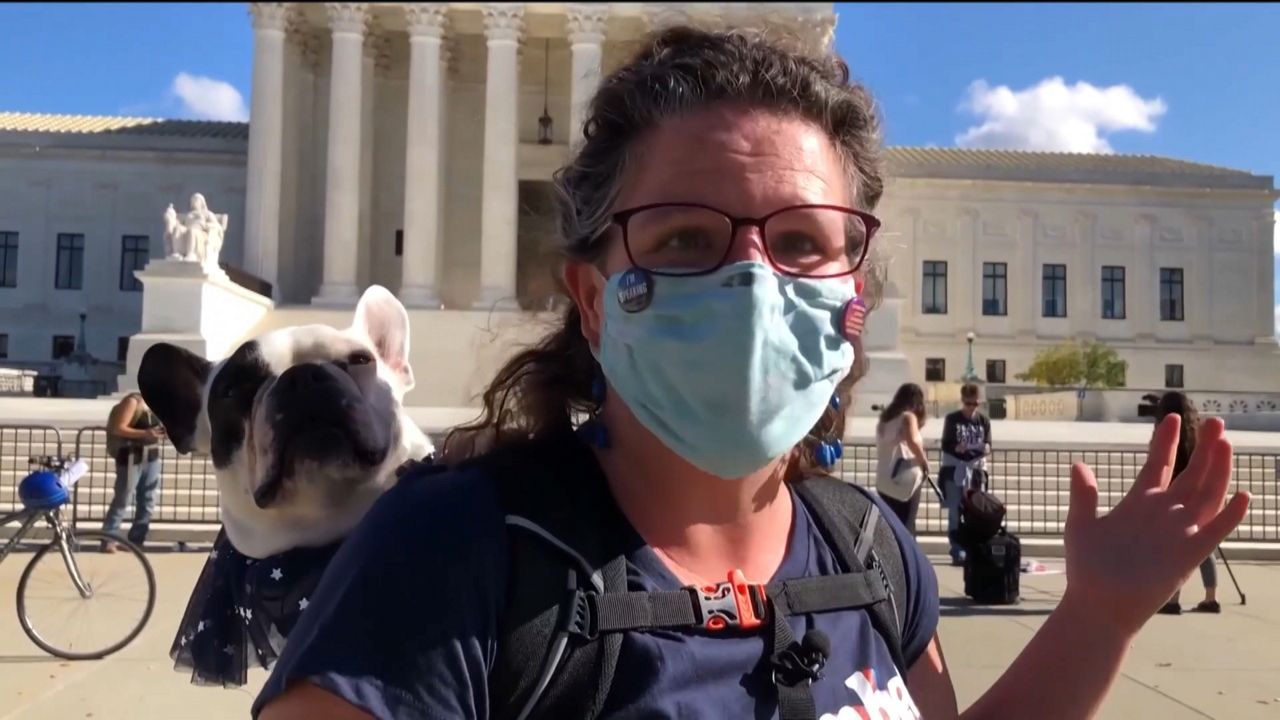 Alissa Medley said having health insurance through Obamacare helps her worry about one less thing, so she can focus on getting back on her feet.

WASHINGTON — President-elect Joe Biden addressed the future of health care after the Supreme Court wrapped up oral arguments Tuesday over whether or not to dismantle the Affordable Care Act, widely known as Obamacare. Several conservative justices including Chief Justice John Roberts and Justice Brett Kavanaugh questioned whether Congress wanted the law overturned in 2017 when they dropped the individual mandate penalty to $0. Although the justices seemed to lean towards keeping the ACA intact while removing the tax penalty, many who have insurance through Obamacare said they’re still worried about how the high court will ultimately vote.

Hundreds gathered Tuesday outside the Supreme Court. Alissa Medley and Sydney Jacobs stayed until the gatherings dispersed, engaged in a conversation about their views on healthcare. Both have preexisting conditions. Medley has insurance through Obamacare.

“I need medication that costs about $500 bucks a month,” Medley said.

Medley lives with her mother and her dog, Domino, after losing her job months ago. She said having health insurance through Obamacare helps her worry about one less thing, so she can focus on getting back on her feet.

“It’s terrifying to think that the people in there are deciding for so many millions of Americans. To dump more and more on them? I mean: the pandemic, it’s scary to go outside, and then to not have healthcare if you do get sick?” Medley said. “It’s just wild to think that they are even considering to overturn it.”

Jacobs, who has a spinal injury, said she understands what it’s like to need health insurance, but said she’s open-minded to change.

“I guess if the ACA is overturned,” Jacobs said. “There’s going to be a vacuum and that could be an opportunity to really get what this country needs and that’s improved Medicare for all, a single-payer system, free of profits.”

Tuesday, Supreme Court justices heard arguments for and against the ACA with several conservatives questioning the notion that the high court should tear down the entire law after the individual mandate was set to $0 in 2017 by Congress.

"What should we make of the fact that Congress didn't repeal the provision?” asked Justice Amy Coney Barrett.

"I think it's hard for you to argue that Congress intended the entire act of fall if a mandate were struck down,” said Chief Justice Roberts. “When the same Congress that lowered the penalty to zero did not even try to repeal the rest of the act. I think frankly that they wanted the court to do that, but that's not our job."

Medley said there’s hope the ACA will stay intact and said her dog Domino has helped her through these trying times, especially now as her healthcare hangs in the balance, amid a pandemic.

“She really has been a rock for me in this time of uncertainty,” Medley said.

If the ACA is ultimately overturned, it could mean no benefits protections for preexisting conditions, preventative care, or coverage for young adults under their parent's plan until they’re 26 years old.