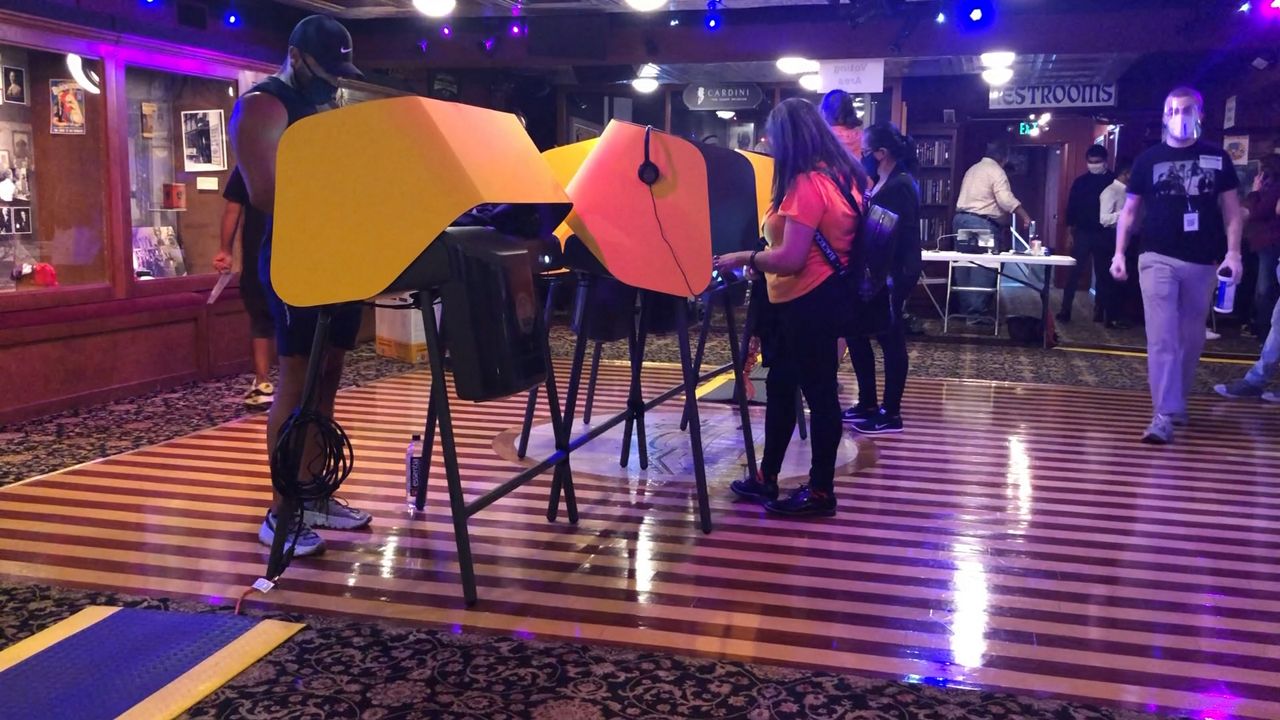 LOS ANGELES — When I heard the Hollywood Pantages would open it's doors — not to visitors — but to voters, I knew this was where I would cast my ballot.

The opportunity to step into that lush, majestic lobby, even for a few minutes, was too good to pass up.


October 30 marked the first day every vote center in L.A. County officially opened. Voters now have over 750 spots to choose from, including several in unique cultural locations.

For Jason and Christopher Esposito, the choice was easy. The couple arrived early on Friday and were first in line at the Magic Castle. The exclusive Hollywood venue, normally open only to members and guests, has now been transformed into a vote center.

Jason called the Magic Castle the ultimate night out. Christopher, meanwhile, misses the magic, something he’s been enthusiastic about since he was a child.

He’s even been known to do the occasional card trick — although Jason said, “It takes a couple of glasses wine and a lot of begging for him to do an actual trick.”

But no one had to beg the Magic Castle to agree to be a vote center.

“It took less than 30 seconds for my board of directors to agree,” said general manager Joe Furlow.

The venue has been closed to on-site dining and performances since March, and Furlow is just thrilled to see people back in the space.

Of course, access is limited. The mansion itself is off-limits. Voters will not get to go behind the bookcase, or into the Parlor of Prestidigitation, or see Irma the piano-playing ghost.

Voters are invited into the Inner Circle, where they can catch a glimpse of the Cardini display, the bar from the film Hello, Dolly! and, of course, cast their ballot.

“I think this is the most important election that we’ve had in a number of years," said Furlow. "We wanted to be a part of that. I can’t wait for all of our citizens to come in and do their own magic when it comes to voting.”

If magic isn’t your thing, there is the option of voting beneath the breathtaking chandeliers at the Dorothy Chandler Pavilion.

“This is an inspirational space,” said Music Center President Rachel Moore. She added that seeing people in the theatre just gives her hope in the midst of what she described as the “long haul since last March.”


The vote center at the Dorothy Chandler Pavilion is located up the grand staircase, not on the actual stage, which has seen many big dramatic moments from opera to ballet. A high stakes election fits right in.

“The arts are about freedom of expression, and what greater gift is there to express yourself than through voting," said Moore.

No matter what vote center you choose, Jason suggests to pack some patience. There may be lines. There may be delays, but, he said, it’s all worth it.

“We want to make sure every vote is counted,” he said, “so just take a couple of deep breaths. You’ll get through all the kinks and, you know, you’ll walk out feeling amazing because you get to vote today.”

To find a location near you, visit lavote.net.

...exactly where you’d expect me to. When I walked into the lobby, I had to fight back tears. I wasn’t successful. Mind you, I often cry after I vote. I find voting very moving, truly. But voting in the middle of a pandemic...in a theatre...at a time when theatres have been dark for months...I didn’t stand a chance of holding it together. Also, Hamilton. #vote @hamiltonmusical @hollywoodpantagestheatre #ivoted #vote2020 @spectrumnews1socal