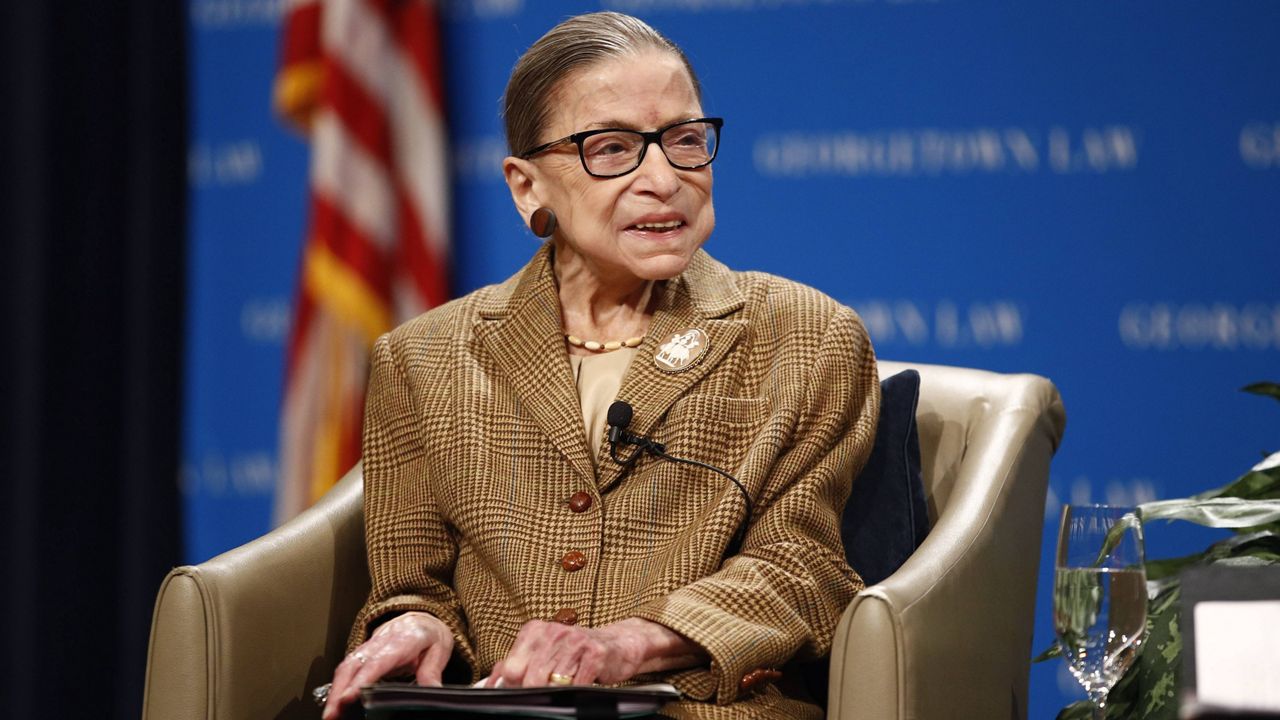 LOS ANGELES (CNS) — Tributes have poured in the hours since U.S. Supreme Court Justice Ruth Bader Ginsburg lost her battle with cancer, with Los Angeles Mayor Eric Garcetti and county Supervisor Janice Hahn among those hailing her as a legal pioneer who fought for women's rights and gender equality for decades.

"This is a tragedy for all those who believe in our Constitution, who believe in equality and who believe our daughters can grow up to whatever they want to be," Garcetti said Friday night on Twitter. "This is a profound loss for America. RIP Justice Ginsburg."

Hahn wrote: "To say I am heartbroken isn't enough. Ruth Bader Ginsburg was a brilliant legal mind and an extraordinary champion for women. She gave us everything she could and her death is devastating."

Assemblyman Anthony Rendon, D-Lakewood, called her death "a devastating loss for our country."


"Ruth Bader Ginsburg was a visionary leader on the Supreme Court, and a champion of equality and equity," he said. "She changed America for the better. Her work will live on for many decades to come."

Rep. Adam Schiff, D-Burbank, said the nation "lost a giant. Ruth Bader Ginsburg was shunned from courtrooms when she began her career because she was a woman. But she persisted, blazing a trail for millions of women and others who had been excluded or oppressed. RBG is a lioness of the law. She is irreplaceable."

Rep. Katie Porter, D-Irvine, wrote that she was "thinking today about Justice Ginsburg's remark that there will be enough women on the Supreme Court when there are nine. History will remember #RBG as a trailblazer and a voice for liberty and equality."

Los Angeles County District Attorney Jackie Lacey said Ginsberg "paved the path for and inspired women, like me, to attend law school and later break glass ceilings when we became the firsts in our chosen professions."

Los Angeles City Council President Nury Martinez said: "It's hard to overstate the incredible impact she had on women across the United States. Throughout her life she fought for equal rights for women, as a mother, an attorney, a professor and during her 27 years as a Supreme Court Justice.

"She was a pioneer, a role model and a warrior. There isn't a woman in America who has not benefited and lived a better life because of her vast contributions to the women's movement," Martinez said. "She was a giant for women's rights, and set an example for what can be achieved by the will and determination of a single woman. It is our collective responsibility and duty to follow in her footsteps."

Ginsburg, who was 87, died at her Washington home of complications of metastatic pancreatic cancer, the Supreme Court announced late Friday.

The second woman to serve on the high court was appointed by President Bill Clinton in 1993. The Columbia Law School graduate taught at Rutgers and Columbia and was a fierce courtroom advocate of women's rights, making her an iconic figure to feminists and earned her the nickname "Notorious RBG."

While at the helm of the Women's Rights Project of the American Civil Liberties Union in the 1970s, the Brooklyn native brought a series of cases before the court that helped establish constitutional protections against sex discrimination.

The leader of the court's four-member liberal wing had repeatedly vowed to stay on the bench as long as her health permitted. In a statement she dictated to her granddaughter within days of her death, Ginsburg said her "fervent wish is that I will not be replaced until a new president is installed."

But President Donald Trump and Senate Republicans, including Senate Majority Leader Mitch McConnell, signaled they would try to seize the opportunity to name and confirm her successor in the final days of Trump's first term.

Their intentions appear to contradict a precedent set by McConnell in 2016, when the Kentucky Republican refused to allow the Senate to vote on Merrick Garland, President Barack Obama's nominee to fill the open seat left by the death of Justice Antonin Scalia. Garland was nominated by Obama in March 2016, but McConnell insisted it wasn't appropriate for the Senate to vote on a nominee in an election year and the seat remained vacant until it was filled by Trump's nominee Neil Gorsuch in 2017.

McConnell is taking a different position in 2020.

"President Trump's nominee will receive a vote on the floor of the United States Senate," McConnell said in a statement late Friday.

"Justice Ruth Bader Ginsburg was a trailblazing American hero, and her passing is an extraordinary loss for our nation. She dedicated her life to public service and protecting our values. Thanks to her perseverance and powerful opinions, the United States is a fairer, more just nation for all. Like millions of people across the country and around the world, I have always looked up to her, and her life's work will continue to inspire me moving forward," Levin said Saturday. "Nobody can truly fill her shoes, but the next Associate Justice of the Supreme Court must honor her legacy and share her commitment to equality and justice.

"Just over four years ago, Mitch McConnell and Senate Republicans fabricated a new rule that a Supreme Court seat should not be filled during a presidential election year," Levin continued. "If they have any respect for the Senate, the Supreme Court, and themselves, they will follow that rule again, especially with Americans already casting their votes just weeks ahead of the election. We must honor Justice Ginsburg's final wish and allow the American people to decide who should nominate her successor."

Orange County Supervisor Andrew Do, a Republican who has worked as a defense attorney and prosecutor, said, "The death of a Supreme Court justice is always a big loss no matter the political perspective... She made it her life to serve our nation and we owe her a debt of gratitude."

Do acknowledged that there will always be debates politically about Supreme Court justice rulings, but "we cannot deny the role they had in shaping the history of this nation and for that we should be grateful as a people. To have people step up and devote their lives to the law, at the end of the day, that's the only thing that keeps American from totalitarianism. My life experience has shown me that the laws that we have in this country is what makes us great and the respect people give to the law is something we cannot discount. The law is nothing if people don't honor or respect it."

Rep. Harley Rouda, D-Laguna Beach, said the "nation has lost a brilliant mind at a time when America is in desperate need of her trailblazing intellect and constitutional conviction. May Justice Ginsburg's service and memory be a blessing to young women everywhere."

Former California U.S. Sen. Barbara Boxer tweeted: "My heart aches for the loss of Justice Ruth Bader Ginsburg. Her contributions to equality will never be forgotten. We must pick up the pieces and pick up the fight."

County Supervisor Mark Ridley-Thomas said Ginsburg "tried so hard to hold on. May she Rest In Peace. May we honor her legacy by voting in record numbers."

Supervisor Kathryn Barger said the jurist "will be remembered for the way she inspired, encouraged, and advocated. She leaves an unforgettable legacy that will be carried on by courageous women and girls for generations to come."

Los Angeles City Attorney Mike Feuer noted that Ginsburg "was an unlikely hero and role model for millions of young people who admired her courage and values. Justice Ginsburg was a force of nature and made an extraordinary impact on our country that will endure for decades. She will be sorely missed."

Rick Chavez Zbur, executive director of Los Angeles-based Equality California, the nation's largest statewide LGBTQ+ civil rights organization, called attention to Ginsburg's final dissent, in which she "warned of a court willing to `cast totally aside' the countervailing rights and interests of women to advance a version of `religious freedom' the founders would not recognize."

"May generations to come heed her warning and follow her example," he said. "May we secure the freedoms promised in our founding documents and finally achieve the moral imperative of our democracy: Equal Justice Under Law."