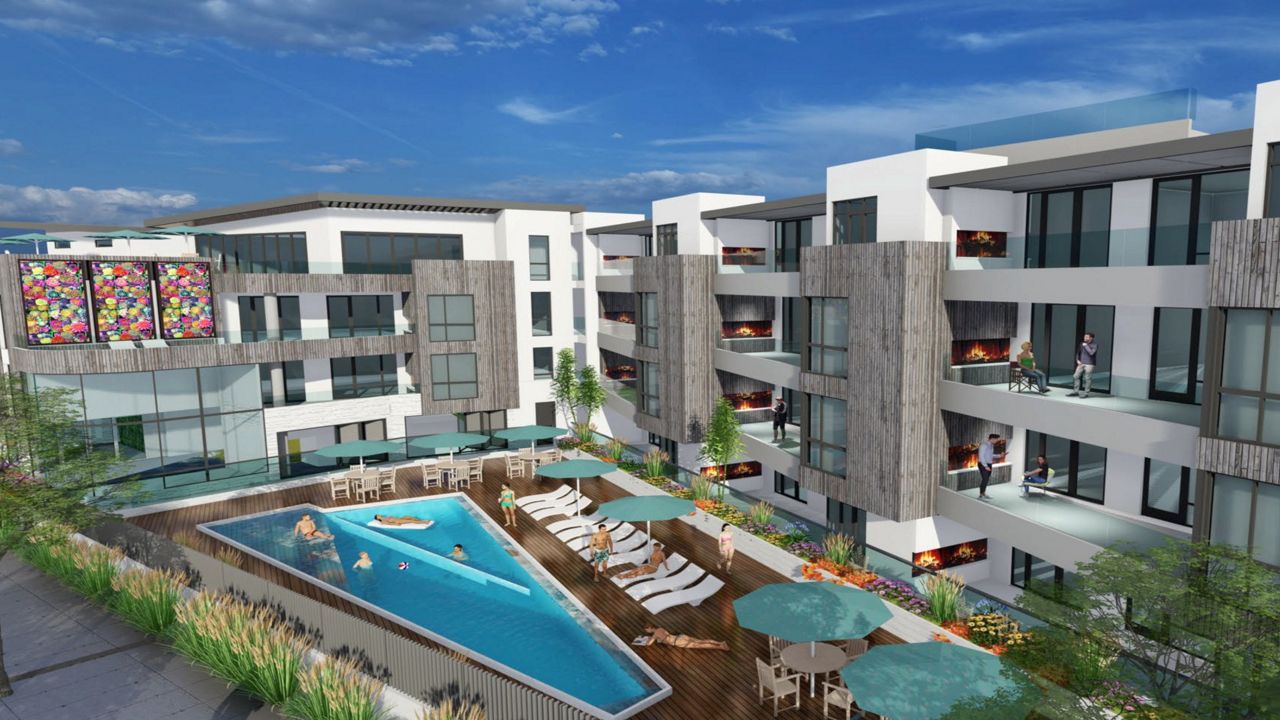 A 79-unit luxury apartment building has been approved in Manhattan Beach, with six units reserved for “very low income” individuals or families. (City of Manhattan Beach)

Manhattan Beach residents locked in a fight over affordable housing

Last January, he caught wind of a new development in his neighborhood — the like of which, he said, the laid-back surfer town has never seen.

Two blocks away from where Ralph lives, the city’s planning commission has approved a four-story, 79-unit luxury apartment building. Ralph objects to the project’s size as well as the modern architecture, which, he said, will not blend with the neighborhood.

Ralph also objects to the project’s impact on local traffic in a part of the city that is already dense, he added.

Also, a California state law is forcing the project’s approval because six of those units are reserved for low-income families.

“I don’t think that’s gonna have a huge impact on the housing issue with affordable housing,” said Ralph. “And, then, you gotta take into consideration where they’re building it.”

Developer Frank Buckley is building it next to the nearly 100-year-old oil Chevron refinery. Ralph said some of his neighbors are also concerned about the environmental impact.

Attorney Andrew Ryan is one of those neighbors. He owns a building that will be surrounded by the new project. Ryan is opposed to the development based on the fact that it is being built next to land, he says, is contaminated with chemicals from the nearby Chevron property.

Ryan pointed to a sign on a fence that reads “Warning: Petroleum pipeline.”

“The project ends within feet of this sign,” he said.

Ryan noted that there are studies which prove the ground is contaminated. He is worried those contaminates will be exposed when the developer digs a planned, two-story underground parking garage.

Ryan walked over to a sewer drain with the inscription, “Drains to ocean.”

“The benzene is up there, and other really dangerous chemicals were found in the soil up there," said Ryan while pointing toward the Chevron refinery. "That’s criminal to me. That could really expose people to a lot of harm.”

Ryan and others in the neighborhood have started a protest group called “Chill the Build” to oppose — or at least, delay — the development known as the “High Rose – Veranda Project.”

During public comment, most citizens spoke against the project.

“We don’t want this, OK? Nobody does,” said one resident.

"Have you ever said, 'Gee, I can’t afford to live here now. And what about our kids?’” said another resident as he addressed the City Council.

While developer Buckley and his team showed PowerPoint slides of what he said was proof the refinery would not damage the neighborhood, the real crux of the argument is a 42-year-old California state statute called “the density bonus law,” commonly referred to as the “bonus law.”

The bonus law says if a developer reserves a small percentage of rental units for low-income tenants, they can build bigger and quicker, fast-tracking costly impact studies and cutting some regulation.

On the record, at least two of the council members opposed the project. Joseph Franklin and Suzanne Hadley both indicated that they were willing to fight the state of California in court to preserve local planning authority.

“So, yes,” answered Buckley. “(The bonus law) does incentivize developers.”

Napolitano interrupted him: “Just because you can, does that mean you should?”

“Not in every location,” said Buckley. “I think in this location, it’s very appropriate.”


Buckley said he and his investors looked at a range of development plans that included building restaurants and shops on the land. He says a housing development was the best possible use with the least impact on the area, especially traffic.

Buckley, who is a local resident, said in an interview with Spectrum News that he is just trying to help his hometown.

“And I think people genuinely recognize that we are in a housing shortage,” he said. We’re not looking to solve the state’s housing problems with a single project. But we’re doing our part in Manhattan Beach.”

Buckley added that he and his partners did a study to determine that rent charged for most of the unites will be “below market price” by Manhattan Beach standards.

Ralph still isn’t buying the argument. He believes the developer is using the state’s bonus law to fast track a project that needs more consideration.

“You know, I don’t care if they put all low-income units over there,” said Ralph. “I just want it to match the character of my town. Put a pause on this project, get the experts in there. Let’s do a full environmental analysis. Let’s make sure it’s safe.”

The city council decided to delay a final vote — and a possible showdown with the State — until September.