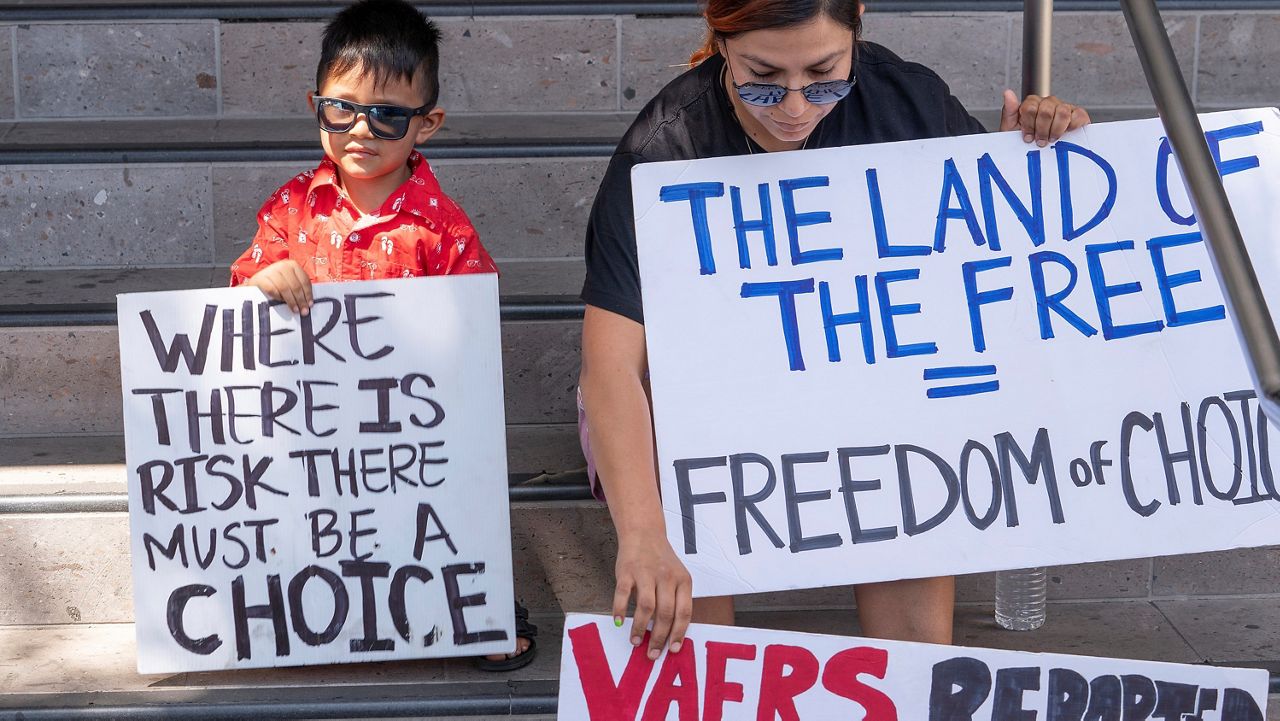 EDITOR'S NOTE: Multimedia journalist Timothy Parker spoke with an LAUSD parent about the mask mandate. Click the arrow above to watch the video.

LOS ANGELES (CNS) — A group of parents upset about the continuing indoor mask-wearing mandate at Los Angeles Unified School District campuses rallied outside the teachers' union headquarters Tuesday, demanding an end to the COVID-19 requirement that has already been lifted at most other schools statewide.


Chanting and holding signs with slogans such as "Stop child abuse," "My kid my choice" and "Take masks off now," the parents cast blame on United Teachers Los Angeles for forcing the district to continue requiring masks indoors. The union's labor contract for this semester requires COVID safety measures, including masks, and lifting the requirement is subject to union negotiations.

"In my opinion it's child abuse and it's going to cause trauma for the rest of their lives," parent Anna Gonzalez told a local news outlet.

Parent Robbie King told the station that maintaining a mask mandate flies in the face of recommendations by the U.S. Centers for Disease Control and Prevention.

"It's just unacceptable," King said. "I'm just so tired of this union bargaining things that they really have no business being in."

He added: "Everybody else in the entire nation has followed the rules. ... We're tired of it."

The state and Los Angeles County officially lifted the indoor mask- wearing requirement at schools on Saturday. The LAUSD, however, has kept the requirement in place, subject to labor talks with UTLA.

Those talks are expected to resume Wednesday.

"I have and will continue to follow the science," Carvalho wrote on Twitter Monday morning. "I lifted outdoor masking upon arriving and am seeking same for indoor settings. Truth is that previous (labor) contract language prevents unilateral action."

Carvalho issued a statement over the weekend saying the district is "working with labor partners ... to reach agreements that change indoor masking in schools from required to strongly recommended."

"LAUSD schools have been the safest and most well equipped in the country because educators and families united to demand critical health and safety protocols," according to the union. "These protocols, like indoor masking, have protected tens of thousands of educators and more than half a million students, along with their families. It is premature to discuss removing these health and safety measures while there are still many unvaccinated youth in our early education programs and schools."

The outdoor mask-wearing requirement at LAUSD schools has already been lifted.

According to the county Department of Public Health, local schools continue to see a decline in the number of positive tests and test positivity for their students and staff. Between Feb. 28 and March 4, more than 470,000 tests were administered at K-12 schools across the county with 1,381 positive tests, resulting in a test positivity rate of 0.3%.

California COVID-19, By The Numbers:

🔹 Average daily cases: 3,306
🔹 Note: Numbers may not represent true day-over-day change as reporting of test results can be delayed

The hospitalization number has been declining steadily since reaching more than 4,800 in mid-January, at the height of the omicron-fueled winter surge.

"The declines reflect decreases in community transmission and have resulted in reduced stress across our health care system allowing health care providers to return to providing a full range of essential prevention and treatment services," county Public Health Director Barbara Ferrer said in a statement Monday. "Keeping transmission as low as possible is key to protecting both our health care system and vulnerable residents. This will require a willingness to continue sensible protections that dampen spread of the virus.

"While masking indoors is no longer required, given continued substantial transmission, wearing masks when in close contact with others in public spaces, remains a very important layer of protection, as is being fully vaccinated and boosted."

The rolling seven-day average daily rate of people testing positive for the virus was 0.7% as of Tuesday, according to the Los Angeles County Department of Public Health.

Last week, LA County health officials said they were working to increase the number of providers who can offer residents access to anti-COVID therapeutics, while also striving to raise awareness about their availability.

A third medication, Evulsheld, is given through an injection and is available for people 12 and over who have not been exposed to the virus and are unable to get a COVID vaccine for medical reasons.