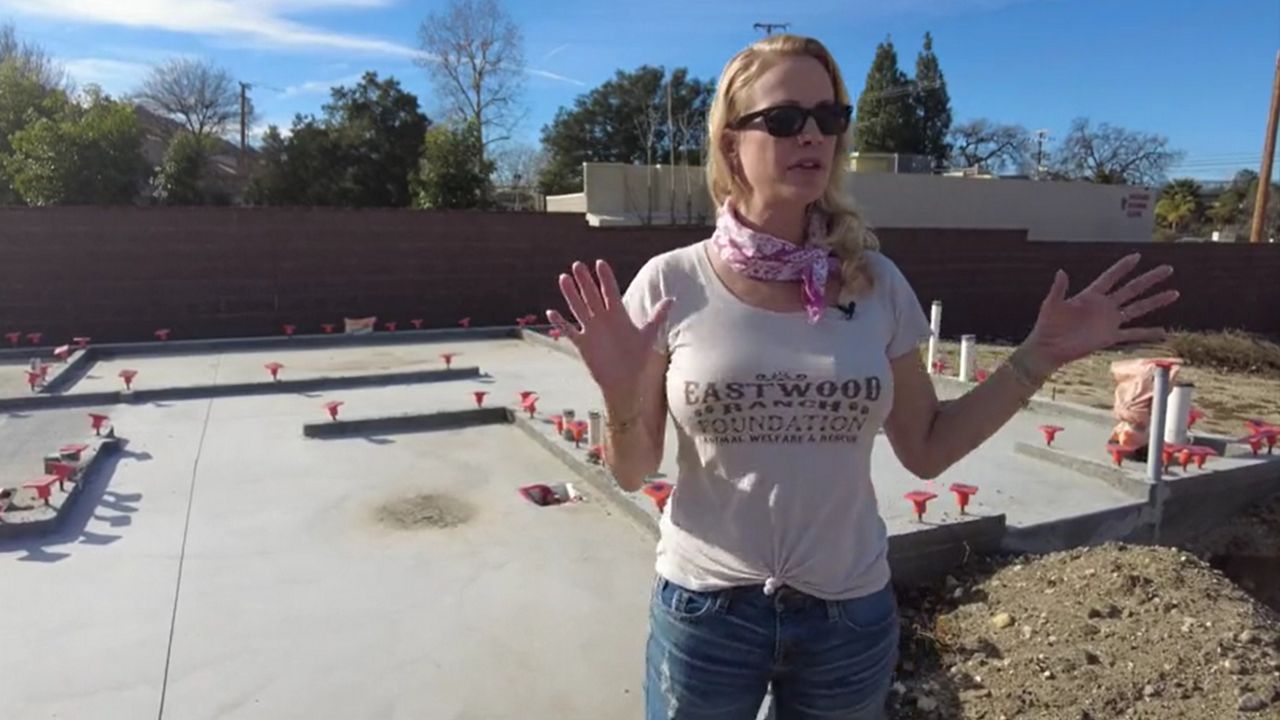 Alison Eastwood’s rescue center will attempt to grab animals that are to be euthanized at public shelters and, instead, offer them up for adoption. (Spectrum News/Dave Stoelk)

AGOURA HILLS, Calif. — When Alison Eastwood first began rescuing pets, she witnessed something that alarmed her into action. It is the reason for her current pet project — literally.

She started a foundation that rescues animals from animal shelters.

The incident happened while Eastwood was visiting a public animal shelter in the San Fernando Valley. Two people showed up with a pair of dogs. Eastwood approached the couple and asked them why they were surrendering the dogs to the shelter.

"'Well, my mom died last week. These are her dogs, and we don’t want them,'" said Eastwood, recalling the conversation. "I was new to rescue at the time. And it was the first time I was really horrified. It shook me to my core."

Eastwood noted that she couldn’t believe how people would consider pets “dispensable.” And she said it happens all too often. When a pet becomes inconvenient, for example, when someone moves or the owner dies, they are quick to drop off their pets at a shelter.

“And just because they’re old or have smelly breath or maybe they can’t hold their, you know, their peeps and poops anymore, it doesn’t mean that they should be discarded,” Eastwood said.

Eastwood was also incensed because she learned that, the very next day, that same couple showed up at the shelter to adopt another pet. What shook her the most about that encounter was the knowledge that those two dogs would probably be euthanized almost as soon as the couple left the shelter.

"When a dog or cat is picked up as a 'stray,' the [shelter] has a holding period to find the owner. However, when you 'owner-surrender' a dog or a cat, they can euthanize it right away. And it doesn’t have any chance of being adopted or fostered."

And shelters in Southern California do that often, Eastwood added. And the reason is simple: If the shelter is full, they don’t have room for newer animals. And, she said, many of the shelters in the area are full.

“It’s unfortunate, but we have a terrible [pet] overpopulation problem in Southern California.”

The Best Friends Animal Society, California, ranks second in the nation in the number of pets euthanized every year. According to the most recent statistics, California shelters put down approximately 110,000 pets annually.

Eastwood has been an animal lover her entire life. Growing up in Pebble Beach, California, she surrounded herself with pets. Even wild animals were welcomed into her home.

“My mom and my family took in some orphaned deer,” Eastwood said. “I had bunnies. I had pet rats. I had birds. I had fish. I even had hermit crabs.”

Eastwood still surrounds herself with animals. Today, in her Calabasas home, Eastwood has two dogs and six cats, and a few of those she is fostering until they find a permanent home. She and her husband built an indoor-outdoor “cattery,” as Eastwood calls it. It’s a bedroom with an adjoining balcony.

“Everyone in the neighborhood knows we’re the crazy cat people,” she said, gazing through the chicken wire on the balcony.

Eastwood credits her love of animals to her parents, particularly her father, who is an avowed animal lover. Her father happens to be film legend Clint Eastwood.

And Eastwood dropped a little gossip about Hollywood’s horseback hero.

“Big bad Clint Eastwood is allergic to cats and horses,” she said with a laugh.

Eastwood's father is doing what he can to support his daughter’s most recent endeavor. In 2020, she broke ground on an animal welfare and pet rescue center in Agoura Hills.

Eastwood explained the center’s mission while she walked around the cement slabs that were recently poured onto the property. It’s not a public animal shelter, she insisted. People will not be able to come just to drop off their pets.

“Eastwood Ranch Foundation specifically goes to high-kill shelters in Southern California to find animals in the most need and bringing them here, so they have a really great chance and the best chance of being adopted,” Eastwood said.

It will have “ranch” or “western theme,” she added, which echoes her father’s famous cowboy films.

Eastwood explained how Eastwood Ranch will also serve as an educational center as well as a place for people to bring their pets during a natural disaster such as an earthquake or a wildfire. She noted how some people in the area had to abandon their pets during the 2018 Woolsey Fire.

But presently, Eastwood’s animal shelter has no shelter. It’s unfinished.

“We just haven’t raised quite enough money to put some walls and a roof on it yet,” she said as she gazed out at the mostly empty lot. “But we just got to get it done.”

She hopes to have Eastwood Ranch open by spring 2023.