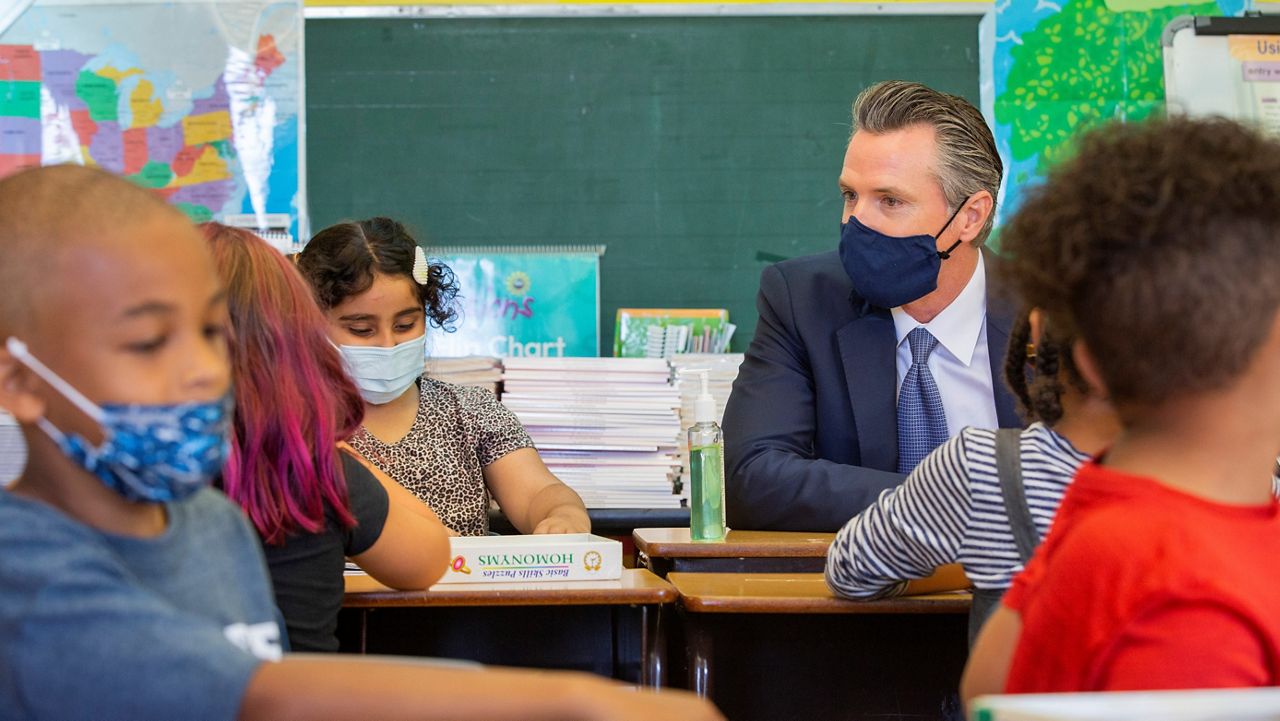 SAN FRANCISCO (AP) — California is poised to impose the nation’s first coronavirus vaccine mandate for schoolchildren, a move announced Friday that could push other states to follow as many did after Gov. Gavin Newsom ordered the first statewide stay-at-home order in the U.S. during the early days of the pandemic.

Newsom said the mandate won't take effect for all children until the U.S. government has finished fully vetting the vaccine for two age groups — 12 to 15 and 5 to 11. That means those in seventh to 12th grades probably will have until July to get their shots. It will be even longer for children in kindergarten through sixth grades because the government has yet to approve any COVID-19 vaccine for that age group.

BREAKING: CA will require our kids to get the COVID-19 vaccine to come to school.

This will go into effect following full FDA approval.

Our schools already require vaccines for measles, mumps and more. Why? Because vaccines work.

This is about keeping our kids safe & healthy.

California law requires all children enrolled in public and private schools to have 10 immunizations, with exceptions for medical reasons. For the coronavirus vaccine, California will grant exemptions for medical reasons, plus religious and personal beliefs. The rules for those exemptions will be written after the state hears comments from the public. Any student without an exemption who refuses to get the vaccine would be forced to do independent study at home.

The mandate eventually will affect more than 6.7 million public and private school students in the nation's most populous state. California already has a mask requirement for schoolchildren.

“We have to do more,” the Democratic governor said during a news conference at a San Francisco middle school after visiting with seventh-graders. “We want to end this pandemic. We are all exhausted by it.”

The federal government has fully approved coronavirus vaccines for anyone over 16 and has given emergency authorization to vaccinate those 12 to 15. Full endorsement for that age group is likely within a few months. Vaccines for children 5 to 11 are still in the testing stage.

California has one of the highest vaccine rates in the country — 84% of people 12 and older have gotten at least one shot, and 70% are fully vaccinated. But the state has a vocal minority skeptical of both the vaccine and the government's assurances of its safety. Last month, more than a thousand people gathered at the state Capitol to protest vaccine mandates.

“I just think it’s a parent’s decision, you know. Period,” said Fabio Zamora, the father of an eighth-grader at Edna Brewer Middle School. “The government in no shape or form should be having mandates like that. I don’t care for that. I’m a veteran. I served this country, and I fought for those rights.”

A small number of school districts nationwide have imposed their own vaccine mandates, including five in California. Among those are the state's two largest districts — Los Angeles and San Diego.

Other states have resisted imposing pandemic rules in schools, including a new law in Kentucky that overturned a statewide mask mandate.

Newsom has been one of the most aggressive governors on coronavirus restrictions, issuing the nation’s first statewide stay-at-home order in March 2020 that was soon followed by 41 other states. More recently, Newsom required California’s roughly 2.2 million health care workers and most state employees to get vaccinated to keep their jobs.

The governor was emboldened after easily defeating a recall effort last month fueled by anger over his handling of the pandemic. He says he interpreted his landslide victory as an endorsement of his vaccine policies.

Newsom hasn't backed all vaccine mandates, however. He recently opposed a requirement for prison guards that a federal judge imposed. Critics used that example to say Newsom is driven more by politics than science, noting the labor union of corrections officers had donated to his campaign to defeat the recall.

“California kids made the mistake of not giving millions to his campaigns,” Republican Assemblyman Kevin Kiley tweeted Friday. Kiley was among 46 candidates who ran to replace the governor during the recall election.

Newsom's announcement comes as COVID-19 infections in most of California have dropped markedly. The statewide positivity rate for the last week was 2.8%, and the average number of daily cases was about 6,355, roughly half what it was when the latest surge peaked in mid-August. Hospitalizations have fallen by 40%.

In Los Angeles County — the nation’s largest, with more than 10 million residents — just 1.7% of people tested for the virus have it, and daily infections are down by half in the last month, when most kids went back to school.

“These numbers are amazingly low given that 3,000-plus schools are now open countywide,” county Health Director Barbara Ferrer said Thursday. She noted that although the number of outbreaks in schools has increased slightly in recent weeks, the overall number is small and largely related to youth sports.

California's largest teachers unions back the vaccination mandate, as does the California Association of School Boards.

“This is not a new idea. We already require vaccines against several known deadly diseases before students can enroll in schools,” said Dr. Peter N. Bretah, president of the California Medical Association. “The Newsom administration is simply extending existing public health protections to cover this new disease, which has caused so much pain and suffering across our state, our nation and the entire globe over the last 18 months.”

Until now, Newsom had left the decision on student vaccine mandates to local school districts, leading to a variety of different orders. In Los Angeles, a vaccine mandate for eligible students is set to take effect in January.

Newsom's plan does not override those plans. He said districts can “accelerate" the requirements, and he expected many will.

The vaccine mandate also would apply to teachers and staff in K-12 public and private schools. Newsom already had required them to either get vaccinated or submit to weekly testing, but once the mandate for students takes effect, the testing option won't be available for teachers anymore.

“We’re never going to get to eradication with this virus, but the higher the immunity, the better,” said Dr. Monica Gandhi, an infectious disease doctor and professor of medicine at the University of California, San Francisco.