On Monday, President Joe Biden made an unscheduled stop to the International Brotherhood of Electrical Workers (IBEW) Local 313 in New Castle, Delaware, to celebrate Labor Day with union workers.

According to the pool, Biden brought sandwiches to the gathering and spent time chatting with union members, taking photos and selfies. 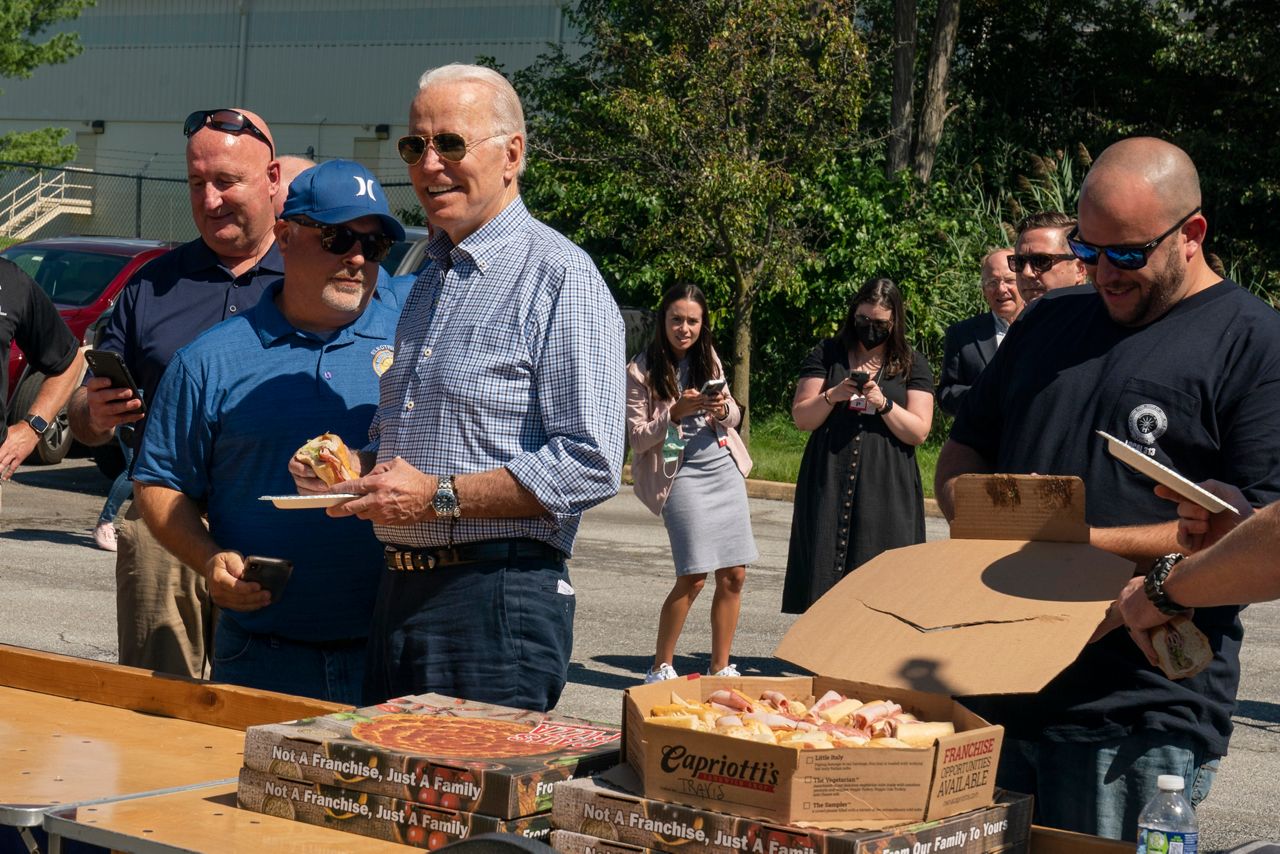 He even spoke on the phone with the mother of one of the members of the union, who called her and put the president on the phone.

"I'm with your son," Biden said. "Mom, I wish you were here. I just stopped by to thank these guys. Happy Labor Day."

Biden shook hands with the assembled union workers, who applauded and thanked the president. 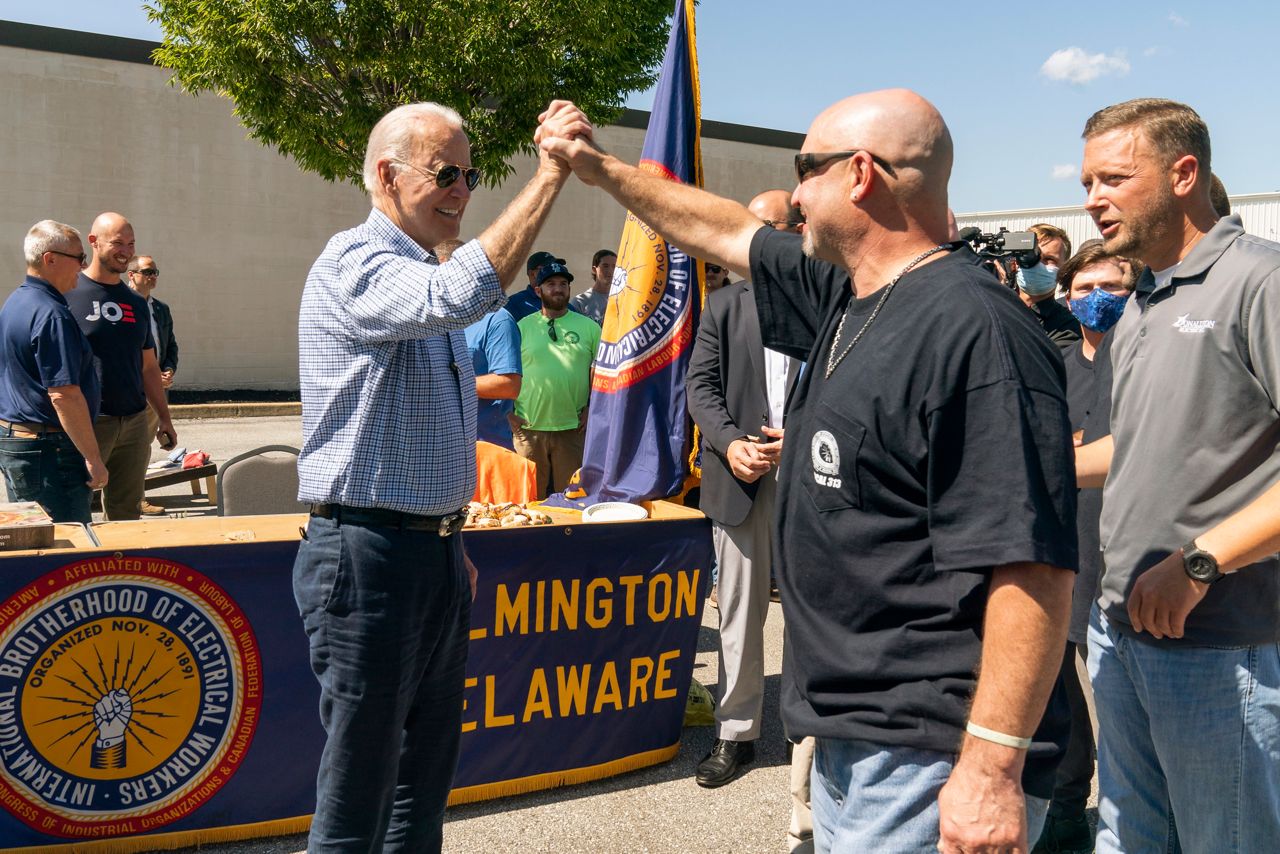 Biden, a steadfast backer of labor unions, has received staunch support from unions throughout his political career, including his successful 2020 campaign for president. The IBEW endorsed Biden in February 2020, a key approval which came just days after a disappointing finish at the Iowa caucuses, when his campaign was seen by many as reeling.

"Joe has a long record of standing up for union members, and we believe it’s in the best interest of IBEW members to elect him our next president," Stephenson wrote in February 2020, adding: "Joe Biden has listened to IBEW members, and his energy policy has been shaped by deep, meaningful conversations with the professionals who will build and maintain the energy grid of the future."

At a gathering of union workers in Las Vegas in February of last year, Biden credited unions with helping to boost his political career early on: "Y'all brung me to the dance."

I believe that given half a chance, there’s not a single thing the American worker can’t do. This Labor Day, let’s celebrate the hardworking Americans who make this country great and recommit to ensuring they’re treated with the dignity and respect they deserve. pic.twitter.com/zFWmotc1cm

In a Labor Day proclamation issued earlier this week, Biden extolled the virtues of hard work and union labor.

“My father taught me from a young age that a job is about much more than a paycheck,” the president wrote. “It is about dignity, respect, and your place in the community. It is about being able to look your children in the eye and assure them that things are going to be okay."

"When Americans go to work each day, they are not just making a living — they are pursuing a life with hope for the future," Biden continued. "In doing so, they build, drive, care for, and grow our Nation."

The middle class built America — and unions built the middle class. Everything that supports a middle-class life was made possible by unions. On Labor Day, we honor all those workers — and their enduring movement — that keep our economy moving and make our nation strong.

“Hard-working Americans are the backbone of our country,” Biden said, before using an oft-uttered phrase from his campaign and beyond: “As I have often said, the middle class built America — and unions built the middle class.”

"Everything that supports a sustainable middle-class life was made possible by unions, and on Labor Day we honor all those workers — and their enduring movement — that keep our economy moving and make our Nation strong,” he continued.

"I believe that every worker deserves not only a fair wage and benefits — but freedom from discrimination, a safe and healthy workplace, and the respect that comes with a secure retirement as well," Biden wrote. "That is why my Administration always stands proudly with workers."

"It is why, in the American Rescue Plan, we gave working people a break — helping workers weather the pandemic, giving middle-class families raising children a historic tax cut, and upholding the promise of a dignified retirement by protecting the hard-earned pensions of millions of American workers and retirees," he continued.  It is also why I am committed to ensuring that all workers have a free and fair opportunity to organize a union and bargain collectively with their employers."

Biden reiterated his support for the Protecting the Right to Organize (PRO) Act and the Public Service Freedom to Negotiate Act: "American workers should make their own decisions –- free from coercion and intimidation — about organizing with their co-workers to have a stronger voice in their workplaces, their communities, and their government."

"After more than a year in which essential workers made extraordinary sacrifices and carried our Nation on their backs, this Labor Day we see more clearly than ever that we must build an economy that responds to the needs and aspirations of working people — an economy that deals everyone in and brings everyone along," Biden said before touting his executive order on advancing racial equity and supporting underserved communities.

He also touted the $1 trillion bipartisan infrastructure bill, which passed the Senate last month, calling it "the largest investment in nearly a century in American infrastructure, American workers, and good union jobs."

"Over the years, the Labor Movement has won many battles: Establishing the 40-hour work week, integrating workplaces, eliminating child labor, securing health and safety protections for workers, and countless other victories. Workers and their unions prevailed time and time again — but the work continues," Biden pledged. "We are going to keep fighting to restore power to working families and protect the rights of hard-working Americans and unions."