Fireworks illuminate over the National Stadium during the opening ceremony of the 2020 Summer Olympics, Friday, July 23, 2021, in Tokyo. (AP Photo/Shuji Kajiyama)

Tokyo Games: An Olympics unlike any other kicks off

Nearly a year after the Tokyo 2020 Summer Games were supposed to kick off, the Olympics are finally here.

One day shy of when the games were supposed to kick off last year, these look to be a Summer Games unlike any other – but all too familiar for the millions of sports fans worldwide who watched events during the COVID-19 pandemic. 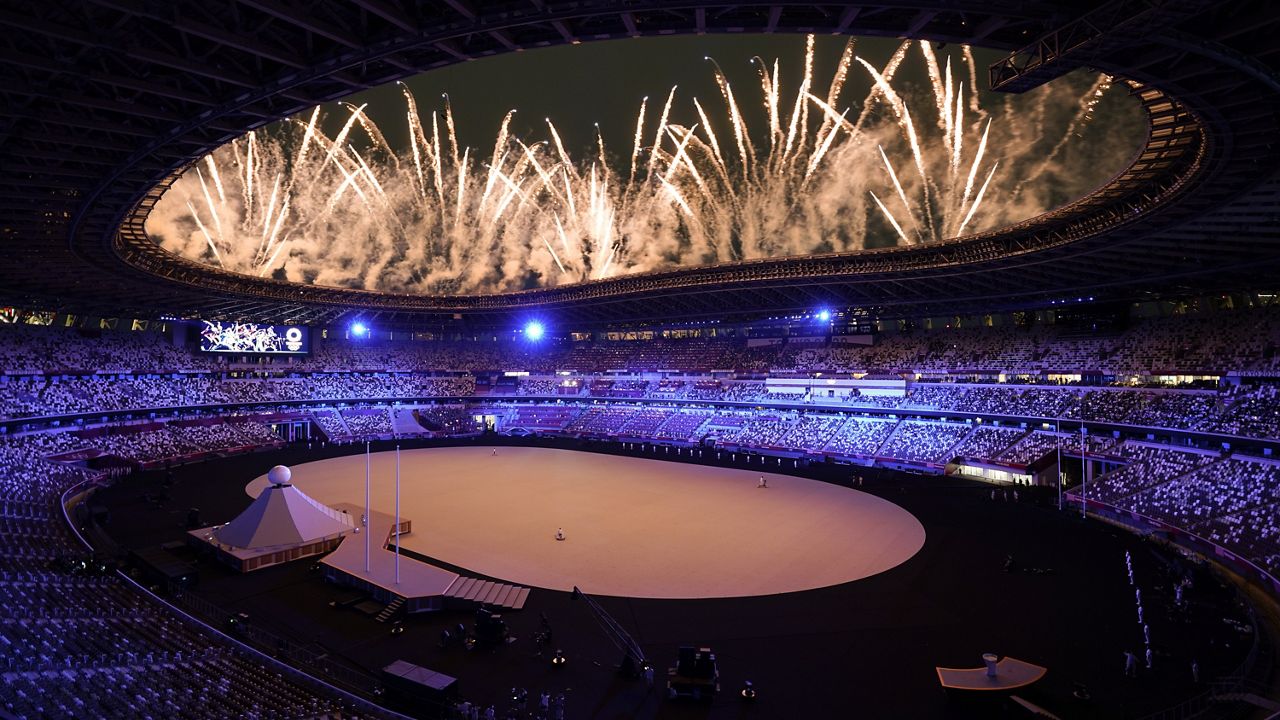 Fireworks go off at the start of the opening ceremony in the Olympic Stadium at the 2020 Summer Olympics, Friday, July 23, 2021, in Tokyo, Japan. (AP Photo/Patrick Semansky)

The games will be held largely without fans. Many fan favorite athletes – including tennis star Coco Gauff, NBA All-Star Bradley Beal and WNBA star Katie Lou Samuelson – have been forced to drop out of the games due to COVID-19.

And COVID-19 cases are on the rise in host nation Japan, with Tokyo reporting nearly 2,000 new cases one day before the games were set to kick off, the highest single-day average since January – with health experts warning that those infections are likely to continue to worsen in the coming weeks.

The opening ceremony featured a moment of silence for victims of the COVID-19 pandemic, with the less than 1,000 spectators allowed inside the Olympic Stadium – which cost $1.5 billion and can hold nearly 70,000 – asked to stand to honor the more than 4 million lives lost worldwide to the virus.

About 200 protesters holding signs reading "Cancel the Olympics. Protect people’s lives." and chanting "Go to hell, IOC! Go to hell, Olympics!" gathered outside of the Tokyo Metropolitan Government Building on Friday, urging organizers to cancel the Olympics and criticizing officials for holding the games during a pandemic.

Several hundred protesters gathered outside the stadium before and during the opening ceremony to demonstrate against the games, which are opposed by a large majority of the Japanese public. Their chants could be heard during quiet moments of the ceremony in the empty stadium. 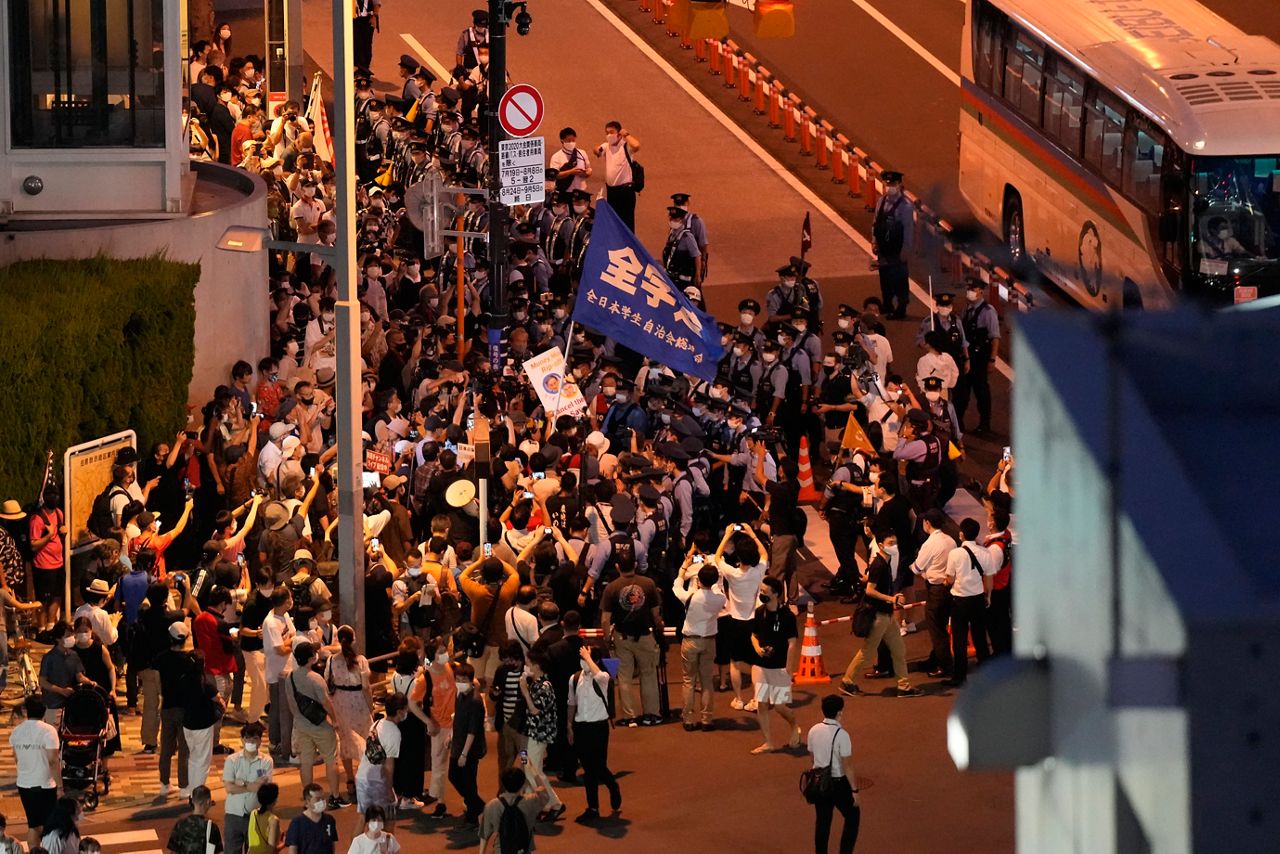 Even as the games were in their final preparations, organizers this week were not ruling out a last-minute cancellation due to the pandemic. "We cannot predict what the epidemic will look like in the future," Tokyo 2020 CEO Toshiro Muto said Tuesday. "So as for what to do should there be any surge of positive cases, we’ll discuss accordingly if that happens."

"We will continue discussions if there is a spike in cases," Muto said.

Separately, the director of the opening ceremony was fired Thursday for making a Holocaust joke during a comedy show in 1998.

“We found out that Mr. Kobayashi, in his own performance, has used a phrase ridiculing a historical tragedy,” Organizing committee president Seiko Hashimoto said one day ahead of the opening ceremony. “We deeply apologize for causing such a development the day before the opening ceremony and for causing troubles and concerns to many involved parties as well as the people in Tokyo and the rest of the country.”

But despite the opposition, the drama, the year delay and the fact that Tokyo is under a state of emergency, the games go on. 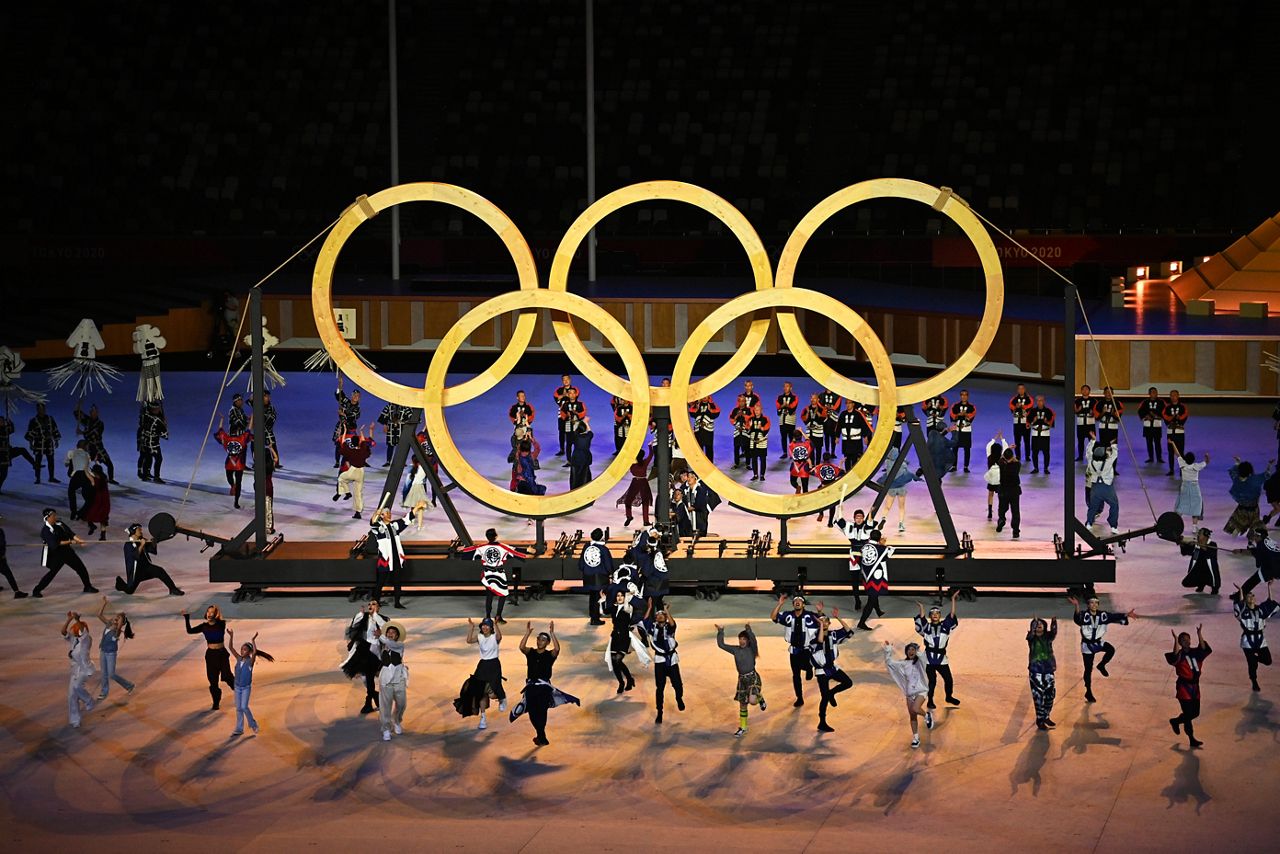 The opening ceremony began with a sole performer jogging on a treadmill, as if to represent athletes training alone amid the COVID-19 pandemic after the postponement of the Tokyo games. 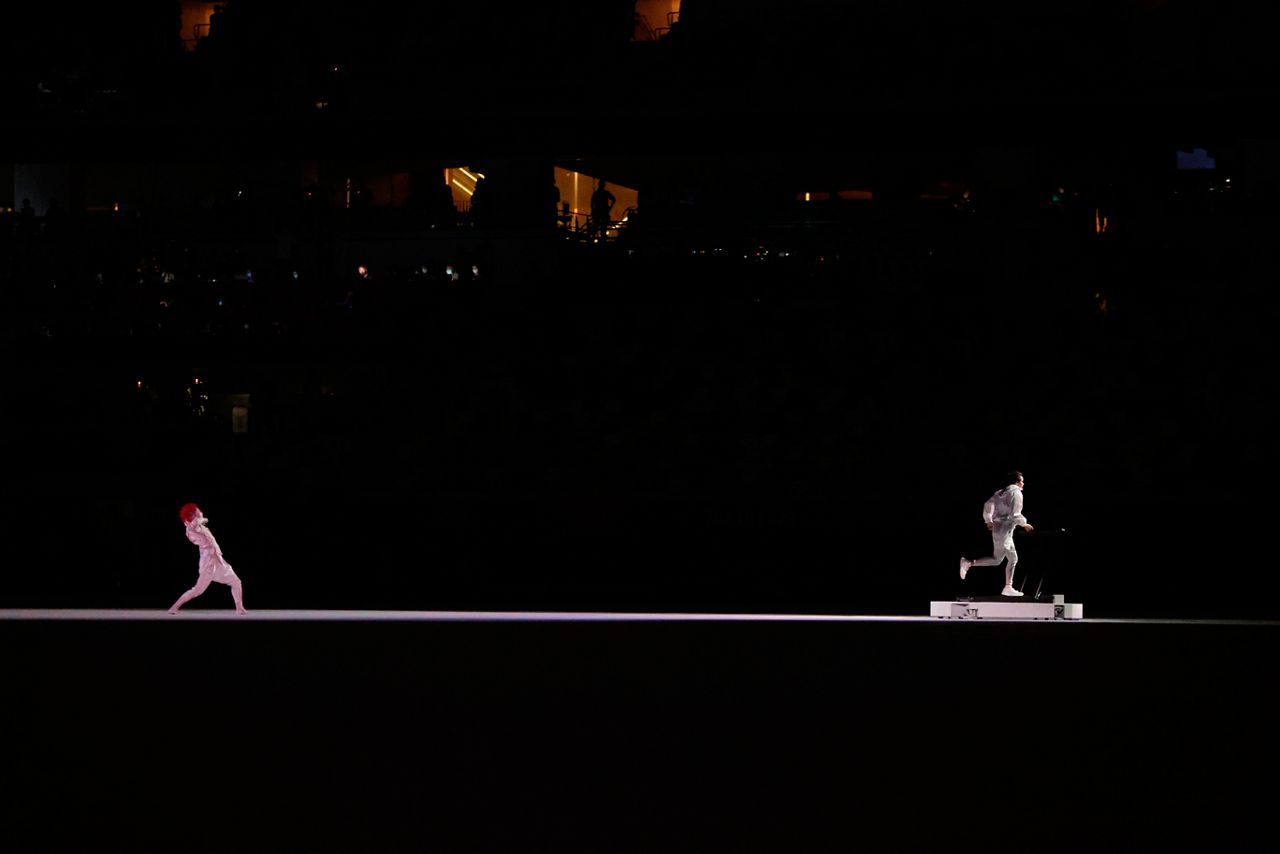 The parade of nations kicked off with Greece, followed by the IOC's Refugee Olympic Team, with all athletes wearing masks as they entered the stadium. 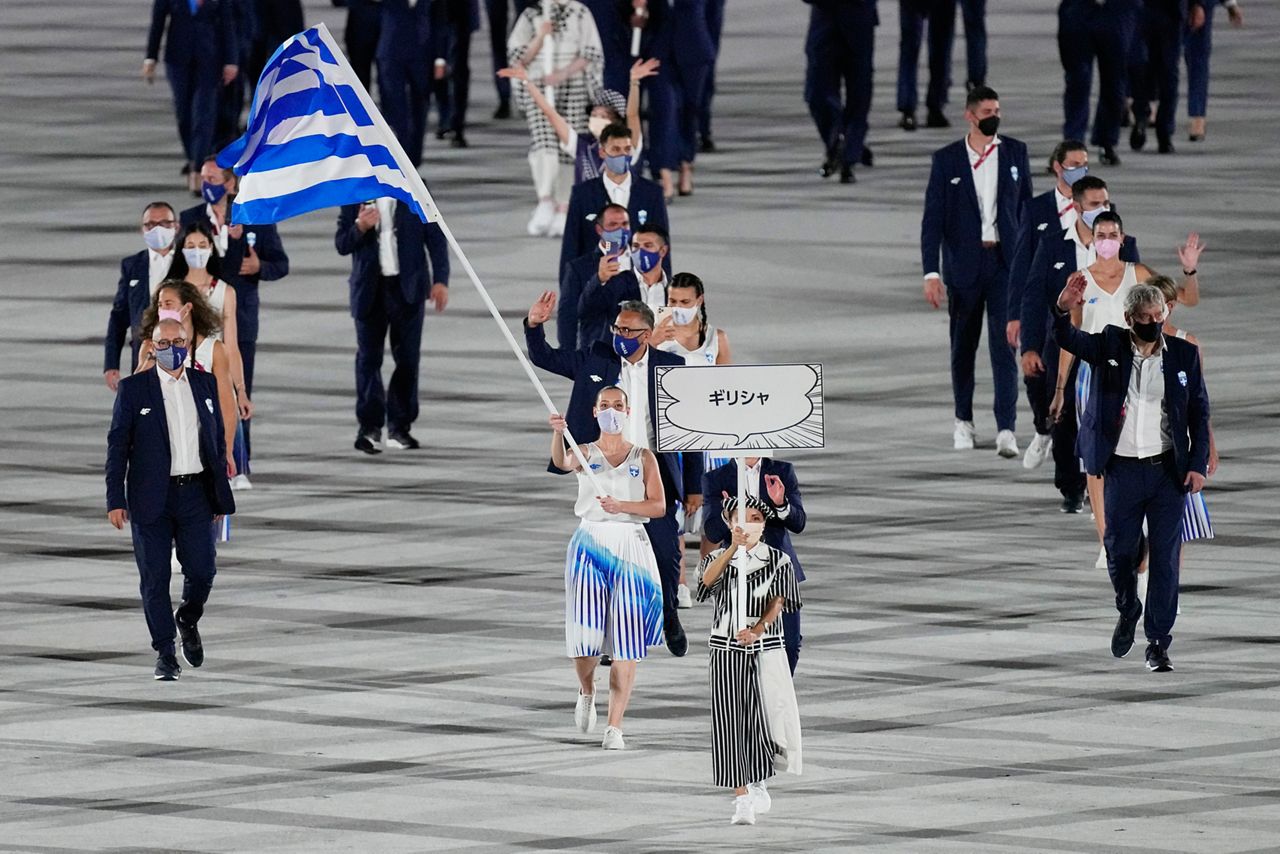 Anna Korakaki and Eleftherios Petrounias, of Greece, carry their country's flag during the opening ceremony in the Olympic Stadium at the 2020 Summer Olympics, Friday, July 23, 2021, in Tokyo, Japan. (AP Photo/David J. Phillip) 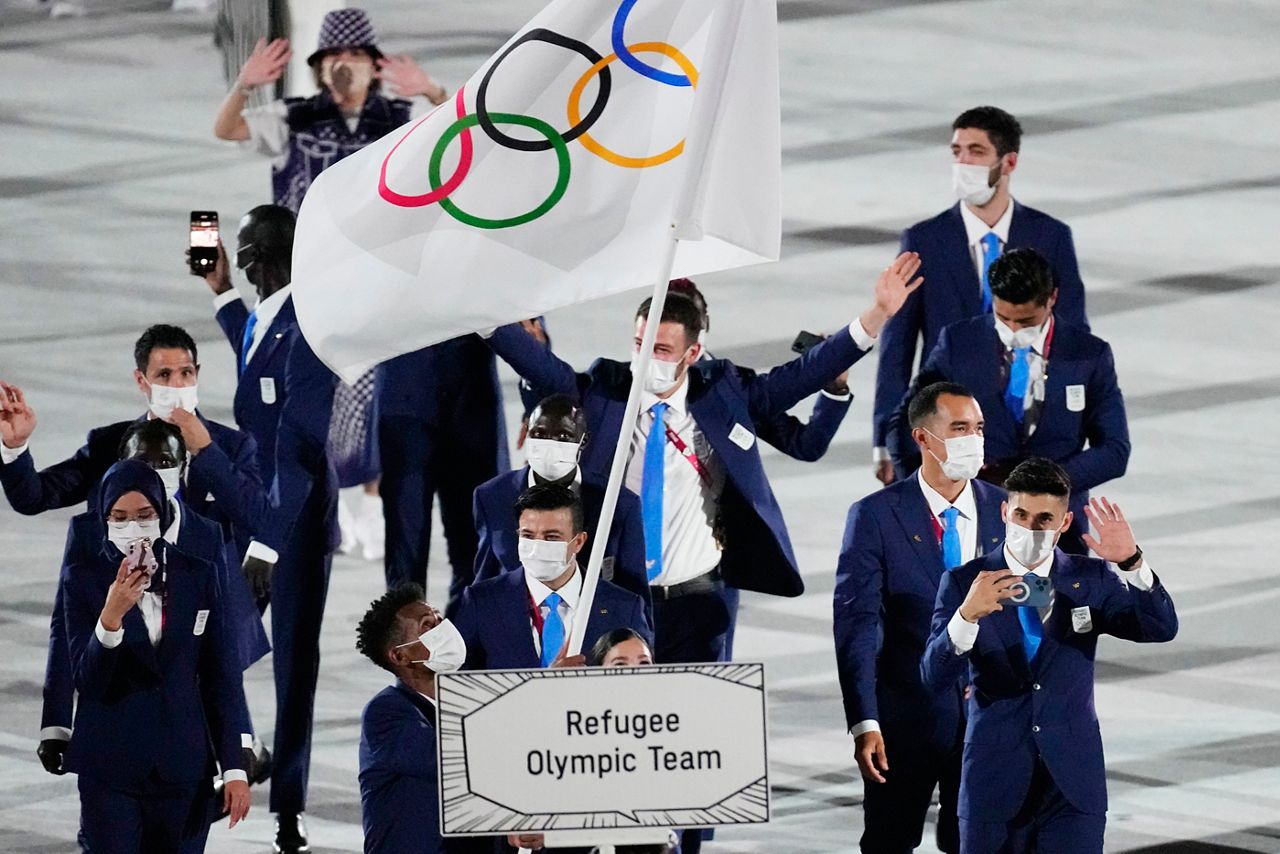 Yusra Mardini and Tachlowini Gabriyesos, of the Refugee Olympic Team, carry the Olympic flag during the opening ceremony in the Olympic Stadium at the 2020 Summer Olympics, Friday, July 23, 2021, in Tokyo, Japan. (AP Photo/David J. Phillip) 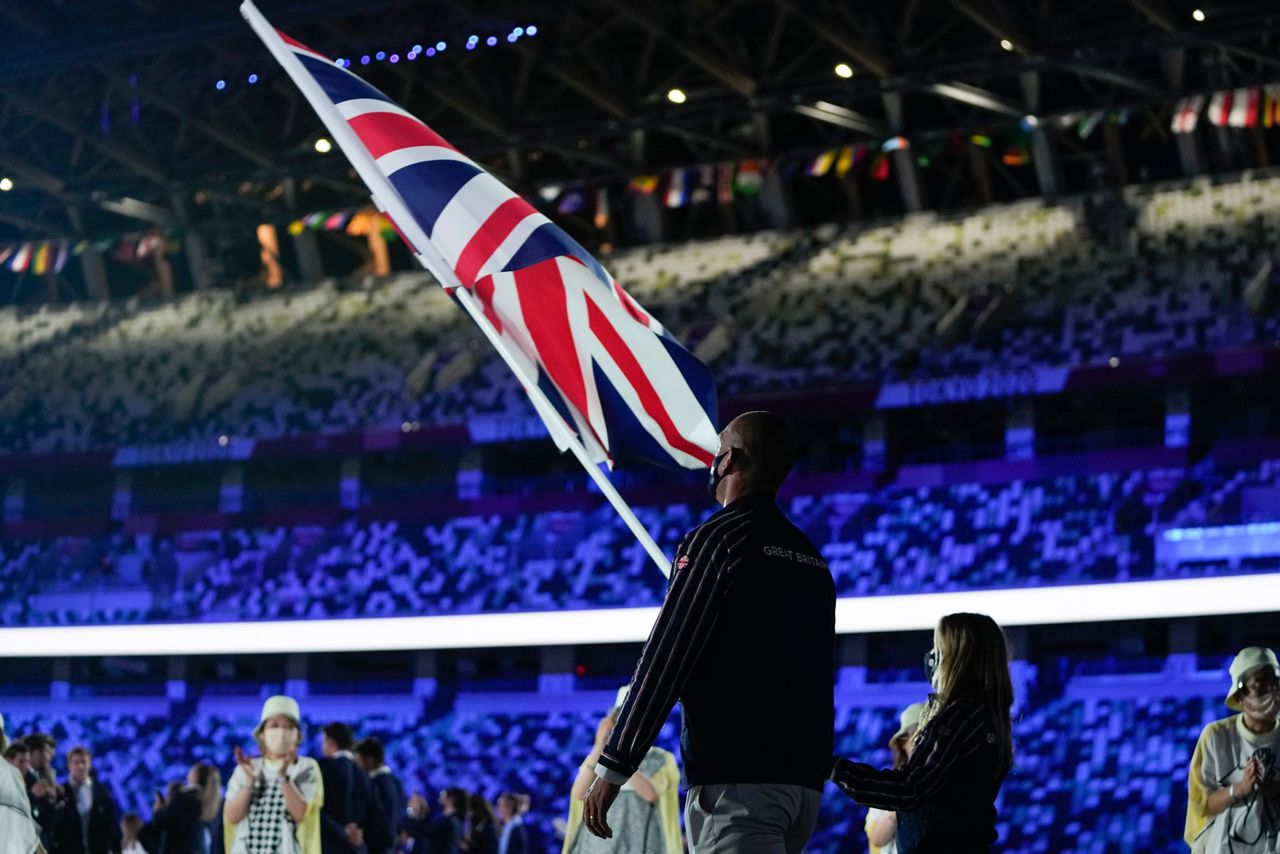 Hannah Mills and Mohamed Sbihi, of Britain, carry their country's flag during the opening ceremony in the Olympic Stadium at the 2020 Summer Olympics, Friday, July 23, 2021, in Tokyo, Japan. (AP Photo/Natacha Pisarenko)

“To know I’m the first person of Muslim faith to have this role and duty is a very proud moment,” Sbihi told the Independent. “We need more representation and hopefully this starts that process of getting young Muslim kids involved in all types of sport."

Even prior to the opening ceremony, the sports have already begun, including softball and soccer, and the athletes are set to take the world's biggest stage. 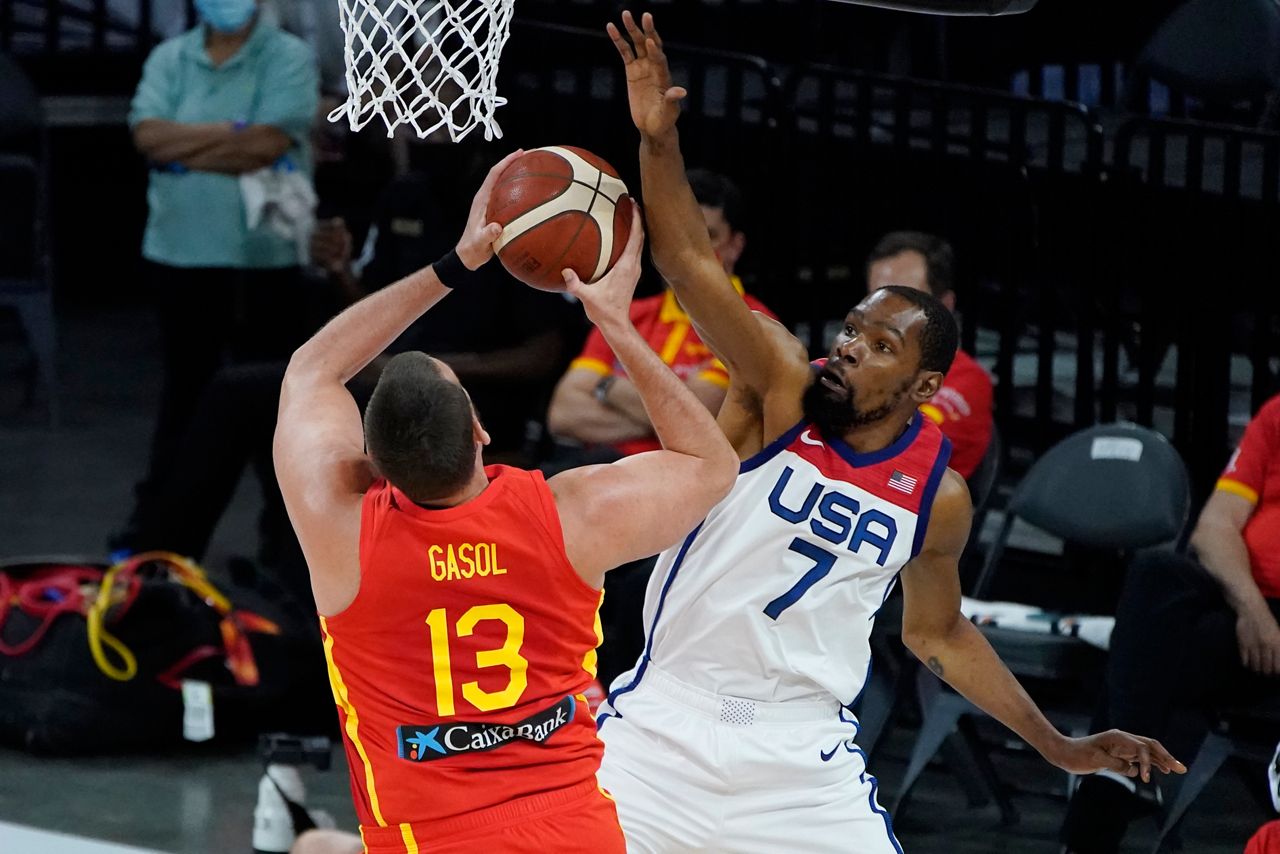 Can the U.S. women’s soccer team, for instance, even after an early, shocking loss to Sweden, become the first to win an Olympics following a World Cup victory? Can Japan’s Hideki Matsuyama win gold in golf after becoming the first Japanese player to win the Masters? Will Italy’s Simona Quadarella challenge American standout Katie Ledecky in the 800- and 1,500-meter freestyle swimming races? 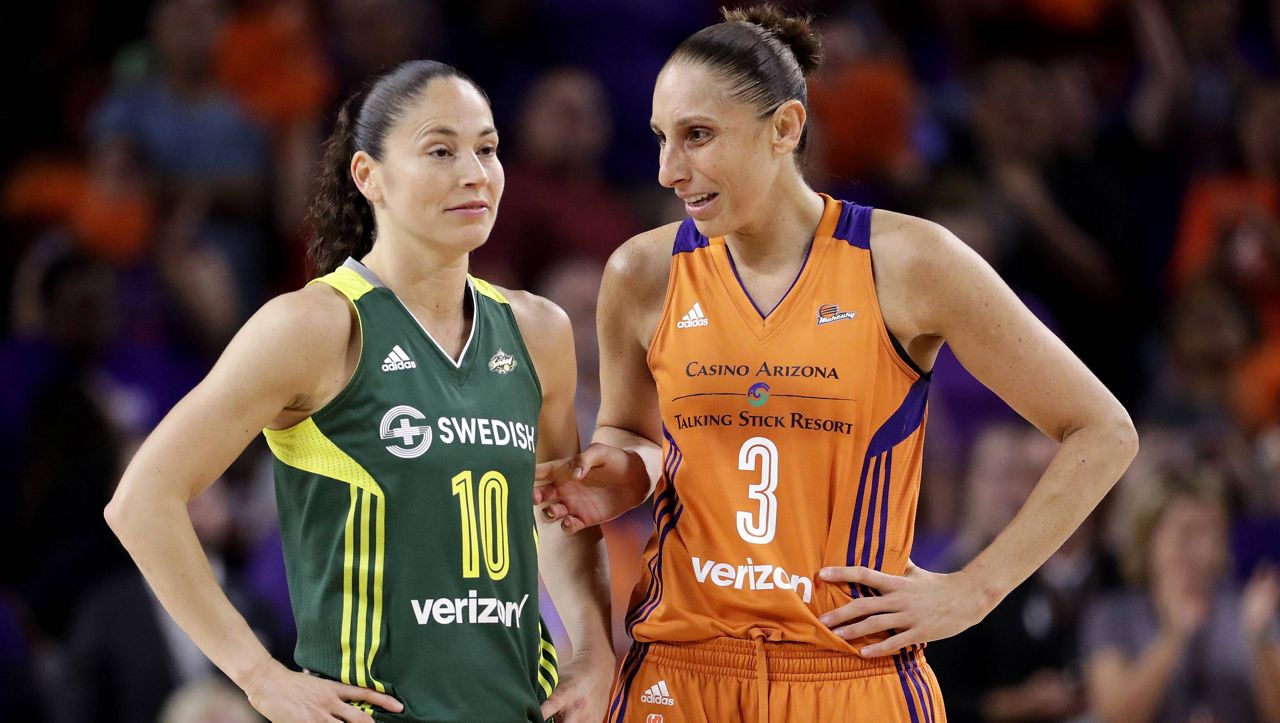 Can former teammates UConn teammates and WNBA rivals Sue Bird, 40, and Diana Taurasi, 39, become the first basketball players to win five Olympic gold medals? Will Kevin Durant continue the dominant play he started with the Brooklyn Nets this season, his first since recovering from an Achilles tear, to win his third Olympic gold?

And can anyone even hope to match the dominance of Team USA gymnast Simone Biles? 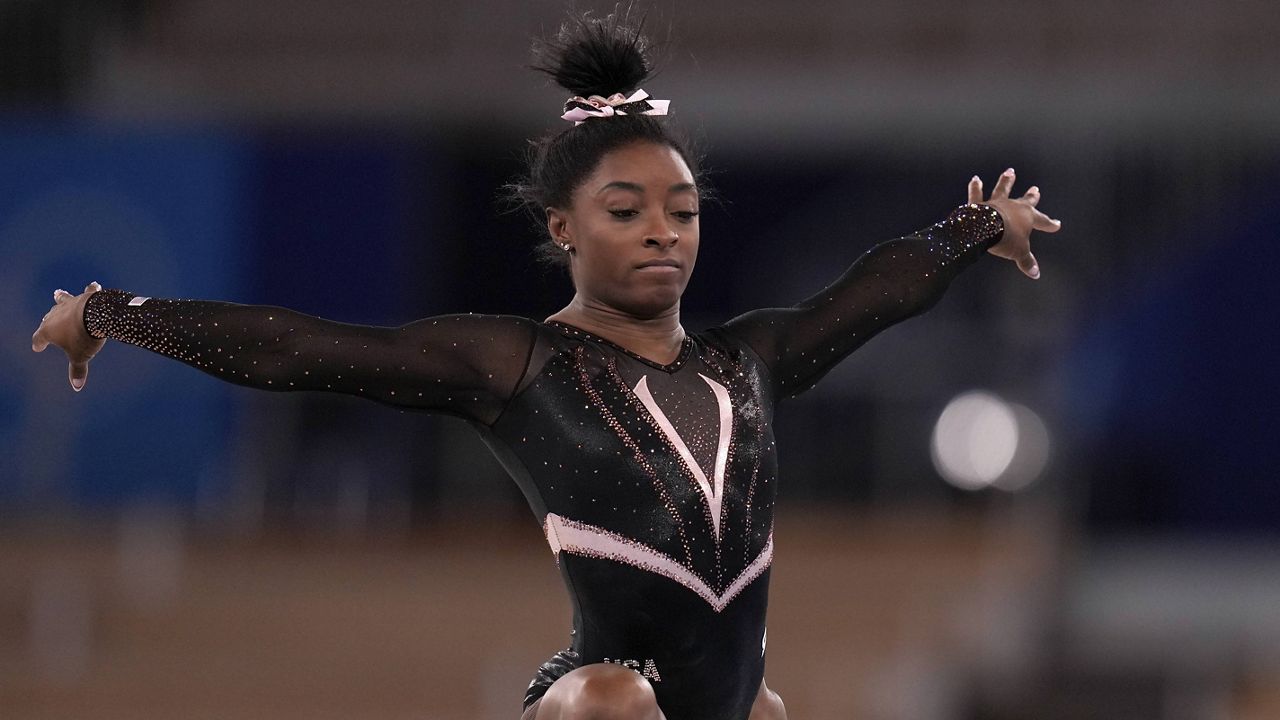 Speaking of Bird, you the Long Island, New York, basketball legend was one of Team USA’s two flag-bearers in the opening ceremony, along with Eddy Alvarez, the Miami Marlins infielder who won a silver medal in the 5000 meter relay in short-track speed skating at the 2014 Olympics in Sochi, Russia. This time around, Alvarez is playing for the Team USA Baseball team, one of several new sports in the 2020 games – along with softball, skateboarding, surfing, sport climbing, karate, freestyle BMX and 3x3 basketball. 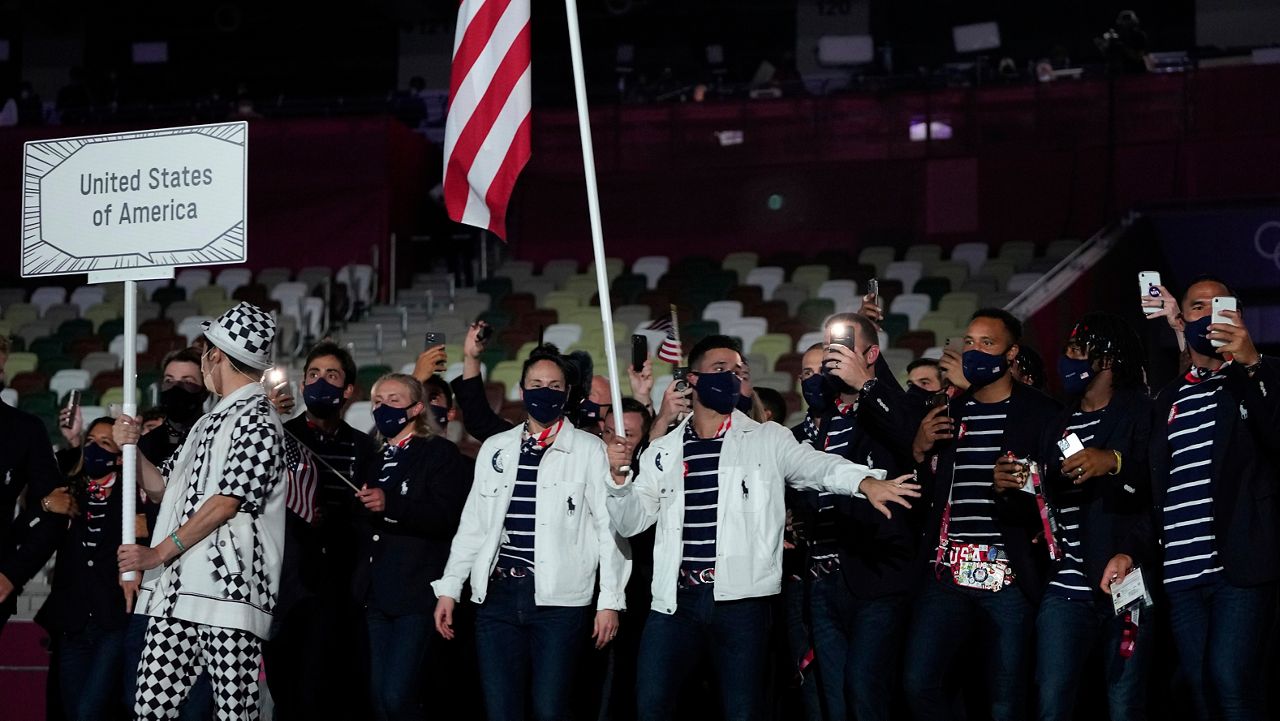 Sue Bird and Eddy Alvares, of the United States of America, carry their country's flag during the opening ceremony in the Olympic Stadium at the 2020 Summer Olympics, Friday, July 23, 2021, in Tokyo, Japan. (AP Photo/Natacha Pisarenko)

Bird says that one of her favorite Olympic memories was walking into the Olympic stadium in 2004 in Athens and hearing the roar of the crowd – Dawn Staley, now the head coach of the USA Basketball Women’s National Team, was the flag-bearer for Team USA, and the women's basketball team walked at the front of the delegation.

Bird called these games an Olympics "like no other."

In an interview with NBC during the broadcast of the opening ceremony, Bird's fiancé Megan Rapinoe, who is also competing in the Olympics on the U.S. Women's Soccer team, said that she "couldn't be prouder and happier" of her partner.

"She told me on text, she heard at practice," Rapinoe told NBC's Mike Tirico. "In typical Sue fashion she was very low-key about it but I did see the video when [Diana Taurasi] told her and I think that says it all, unlike me she doesn't like a lot of the attention but I think you could tell in that moment just how much it meant to her."

"Obviously, she's a five-time Olympian going for her fifth gold medal, I get to see just how much that means to her and how much she puts into it," Rapinoe continued. "I know this means the world to her and I couldn't be prouder and happier. And I feel I get to share in it even though I'm not deserving enough to be the flag bearer." 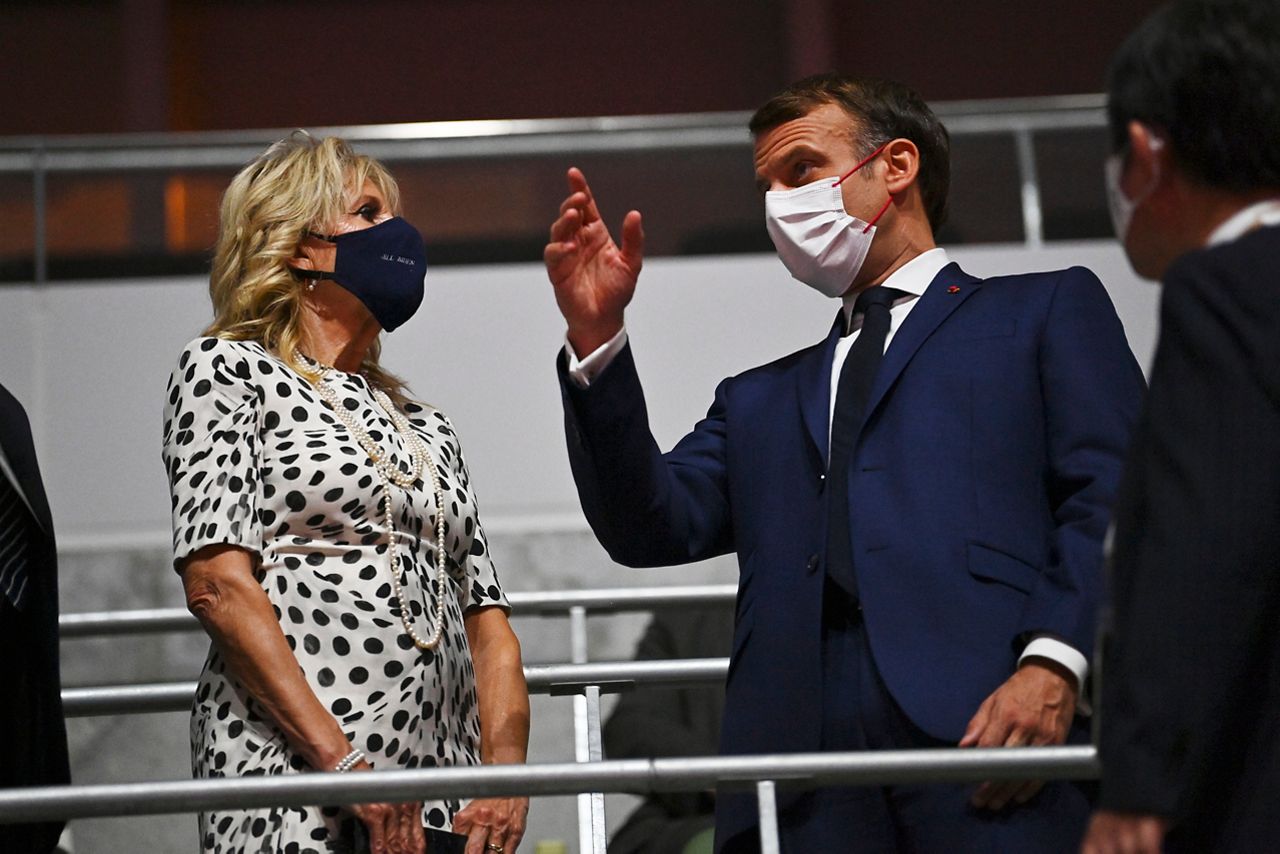 First lady of the United States Jill Biden speaks with French President Emmanuel Macron as they arrive at the opening ceremony in the Olympic Stadium at the 2020 Summer Olympics, Friday, July 23, 2021, in Tokyo, Japan. (Dylan Martinez/Pool Photo via AP)

First lady Dr. Jill Biden is leading the United States delegation to the games, her first solo international trip in the role, where she will not only mark a modern tradition of first ladies representing the U.S. abroad but also carry the support of the country in a year where the number of Americans in the audience is close to none.

In an open letter to Team USA published by NBC News, Dr. Biden celebrated the achievements of the athletes who prepared for the Olympics amid a global pandemic: "Becoming an Olympian is a rare accomplishment in a normal time, but you did it during a global pandemic. You are forever one of the most elite, most celebrated and most accomplished athletes in the world."

"Your entire nation is cheering you on and we are grateful for what you’ve given us: the chance to come together in common awe and appreciation for your accomplishments and the shared joy of rooting for our country on the edge of our seats," she wrote.

Dear @TeamUSA, your entire nation is cheering you on and we are grateful for what you’ve given us: the chance to come together in common awe and appreciation for your accomplishments and the shared joy of rooting for our country on the edge of our seats. https://t.co/5TPTxQlU2u

"In these moments, we are more than our cities or states or backgrounds. We are more than our jobs or our political parties. We are united. We are all, first and foremost, Team USA," she continued. "You bring us together in a way that little else can. You remind us that with dedication, hard work, courage and teamwork, incredible things are possible."

"What a gift you give. What an honor it is to watch you soar," she concluded. So, thank you for your hard work. Thank you for the tears and sweat that you’ve given to be here today. Thank you for representing our nation to the world. Go Team USA!"

Tennis star Naomi Osaka lit the ceremonial cauldron, ending the Olympic flame’s long journey from Greece to Tokyo and formally closing the opening ceremony and kicking off the games. 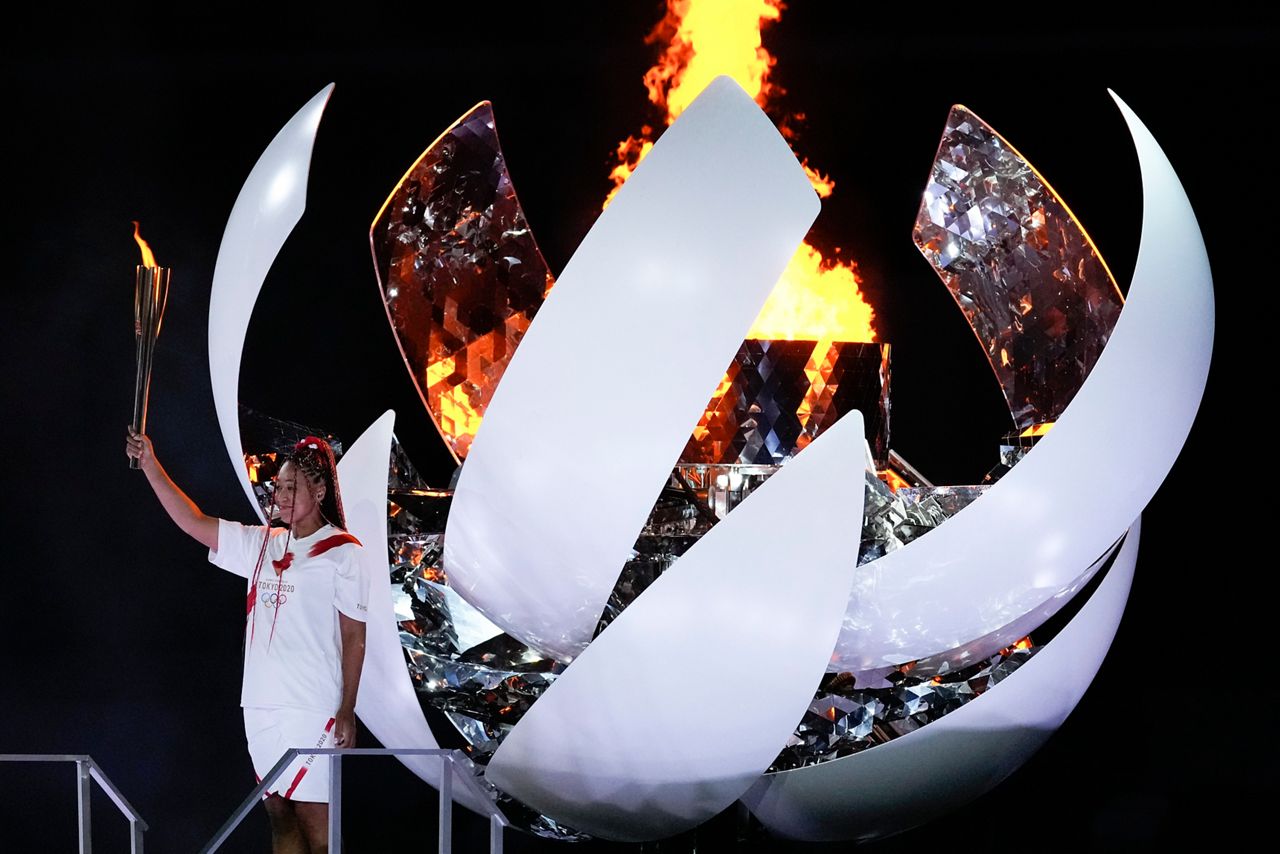 Japan's Naomi Osaka reacts after lighting the cauldron during the opening ceremony in the Olympic Stadium at the 2020 Summer Olympics, Friday, July 23, 2021, in Tokyo, Japan. (AP Photo/Ashley Landis)

Athletes from around have worked their entire lives for this moment, just one year delayed. 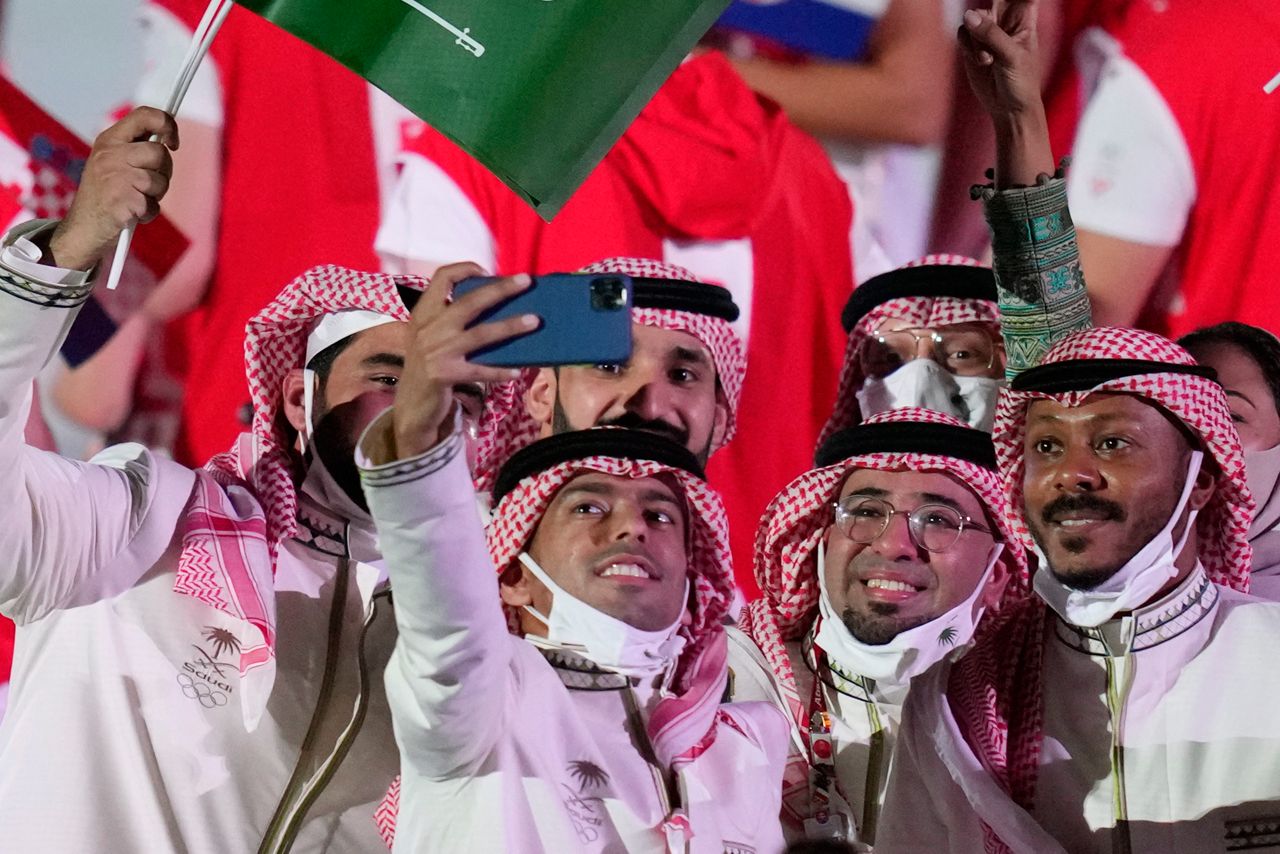 Athletes from Saudi Arabia walk during the opening ceremony in the Olympic Stadium at the 2020 Summer Olympics, Friday, July 23, 2021, in Tokyo, Japan. (AP Photo/Kirsty Wigglesworth)