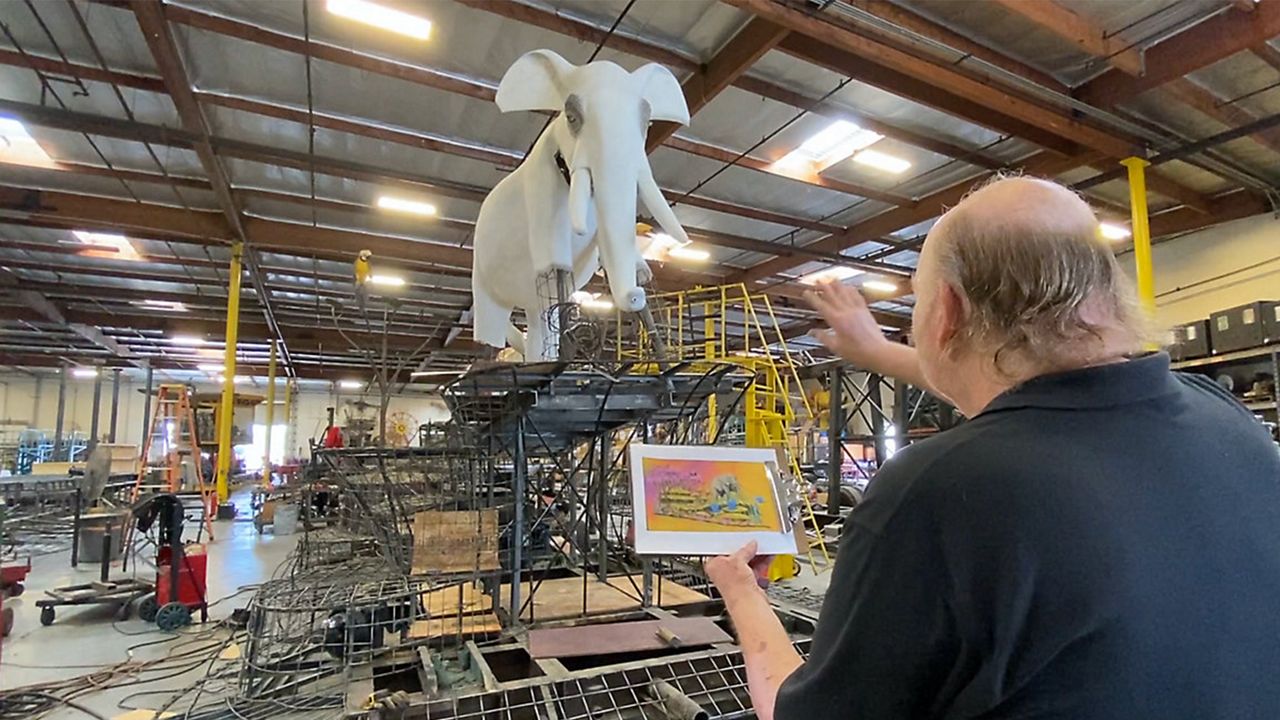 IRWINDALE, Calif. – At first glance, a mix of foam and steel constructed into a small model may not look very impressive, but to longtime parade float builder, Tim Estes, it’s a tiny version of a massive float he is creating for the 2022 Rose Parade.

“The elephant is moving his head side to side throughout the parade,” Estes said as he pointed to a small animal structure on the model.

Estes is the CEO of Fiesta Parade Floats, a company he started in 1988. Over the years, he has perfected a construction method that starts with a drawing, then a small-scale model and ends with a full-size float.

“I recall I was 8-years-old when I started decorating floats at the Rose Parade, found it quite fascinating but I was much more fascinated by how they were built,” Estes said.

He’s overseen the construction of more than 500 floats, but everything came to a standstill last March. Estes said he lost over $3 million in revenue after the last Rose Parade and other parade events were canceled. But now that float building is ramping up for this January’s Rose Parade, he faces another challenge.

“I purchase about 40,000 pounds – 20 tons – of pencil steel every year and unfortunately, from the last Rose Parade to now, the price has doubled,” he said.

“A lot of material comes out of Canada and Canada has been hit really hard with some bad viruses in the trees and so there is lesser amount of material to make this particular material,” he said.

Estes said each float takes several months to build and the cost ranges from $125,000 to $500,000. But for one of his clients, the city of Torrance, it’s worth it. President of Torrance Rose Float Association Beverly Findley helps raise money for the float.

Findley said the association is trying to raise at least $50,000 to go towards the cost of building the float and transporting volunteers for decorating.

After a year without the parade, she can’t wait to see the finished product.

“When we go for judging, it’s like, you sit there, you’re up there clapping, you know, so the judges give you good stuff, but you’re also tears are running down your face because you’re so proud of how beautiful it looks,” she said.

Her reaction is one Estes hopes to garner with every float he makes, which will be about eight this year.

“Maybe somebody is having a bad day but they look at the float and they smile. Maybe they forget their woes for 15 seconds,” he said.