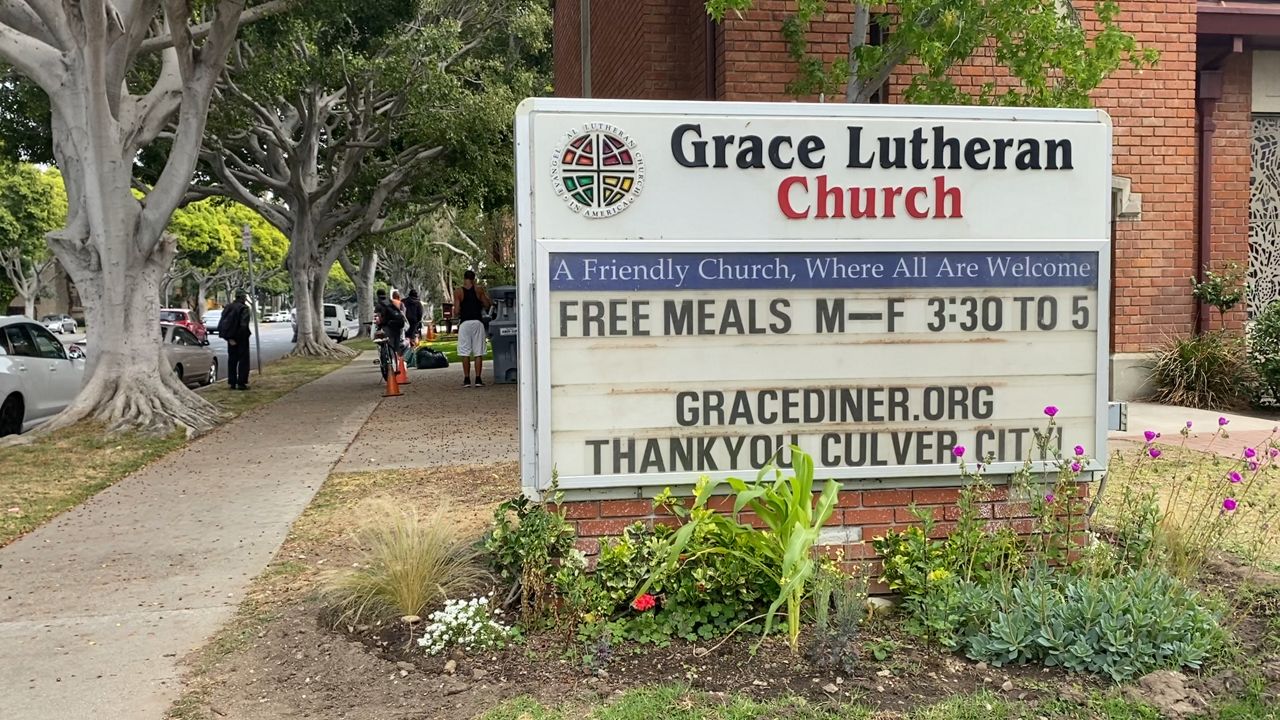 CULVER CITY, Calif. — Every weekday, an organization called Grace Diner feeds nearly 200 people not just with hot meals, but with fresh fruit and veggies, too.

The woman who runs it says this is the only place for the homeless to get consistent, quality food for free in Culver City, but she's at risk of no longer being able to offer it.

Two o’clock at Grace Diner means the race is on for Program Director Lisa Skelley to get the food prepared. Beef burgers and roasted potatoes were on the menu on one recent day.

Skelley serves about 180 free hot meals to anyone who walks up to Grace Lutheran Church where Grace Diner is housed, every day of the week, no questions asked.

“I think it’s hard for people who eat three meals a day to understand what it’s like not to eat," Skelley said. "I’ve had people who could barely talk come up here, young guys, who haven’t eaten in two to three days. They get a meal, they get water, the next day they come up and they are like a different person.”

She started Grace Diner back in 2009, creating an entire restaurant experience for the homeless and food insecure in Culver City. But that was just once a week.

Then, the pandemic hit and Skelley says the need skyrocketed, so she teamed up with an organization called Feed Culver.

They gathered corporate and private funds to pay out-of-work restaurant employees to make hot meals that were then donated to Skelley. It’s been a godsend, she says, but the funds are set to run out by the end of June.

"We are in danger of losing funding and stopping this…I would be heartsick for that to happen," Skelley said.

She says this is the only program in Culver City that feeds the homeless every weekday. People start to line up an hour early and she only has a handful of volunteers to help her. After 14 months of this, she’s exhausted.

“I’ve gone through a lot of peaks and valleys over the last 14 months of exhaustion, euphoria, back to exhaustion and now I’m really hitting exhaustion because of the lack of funding for Feed Culver. But it’s a labor of love," she explained.

A labor of love to not only feed those who are struggling—but to treat them humanely and give them healthy options.

For people like Jesse Banuelos waiting in line outside, these meals are what keep him pushing through his rough patch.

He’s been homeless, living in his car since March and doesn’t have enough money for both food and gas to get to public showers and job interviews.

“I only need just the food, you know, I can get by with everything else. I have my clothes. I have um… not too much support," Banuelos said.

Seventy-nine-year-old Ms. Sylvia, in line after Banuelos, walks miles to get to Grace Diner every day.

"They’re saving a lot of people’s lives," she said.

For the Sunday School teacher who started serving the homeless with just about 100 meals on Mondays, Skelley never expected to be feeding 10 times that many people every week, but she’s afraid the people who come have no one else.

“It’s become my life’s work, that’s all I can really say," she said.