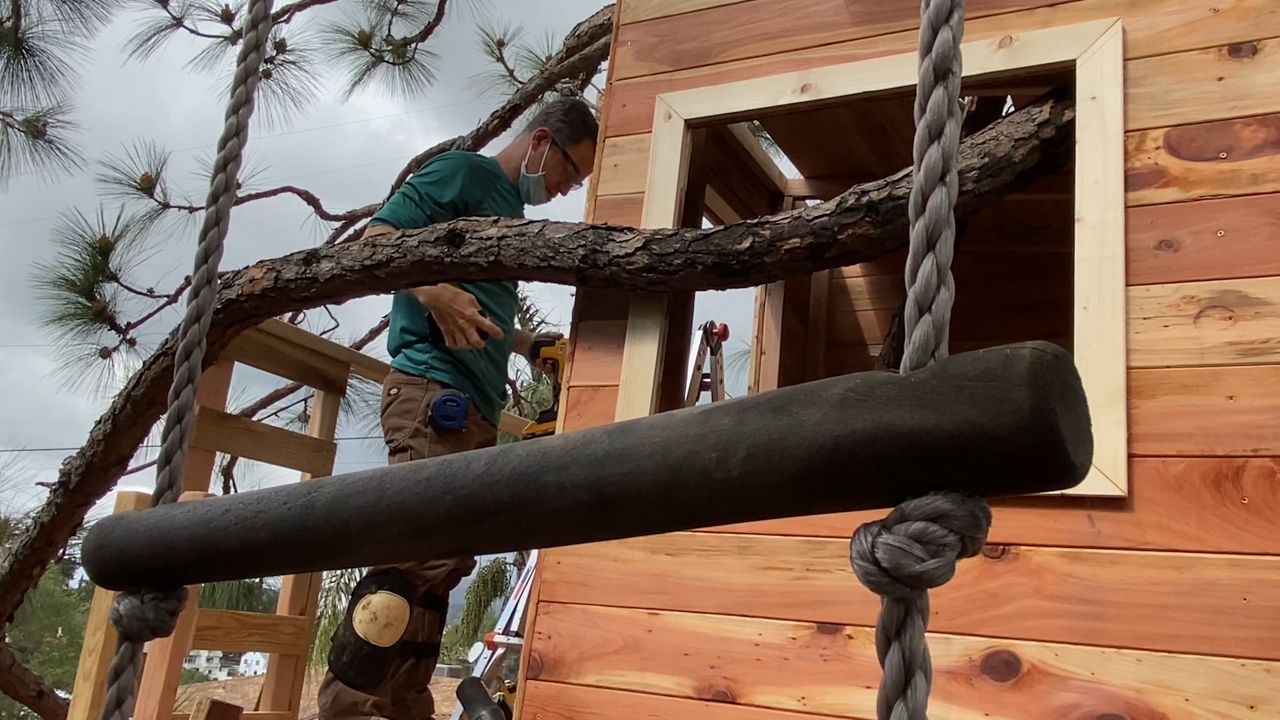 GLENDALE, Calif. — Many people had to find ways to branch out during the pandemic, but Eric Buss took it literally.

"I'm getting paid for this," he said, "climbing a tree all day."

Buss has been a professional magician for nearly 30 years – since he was a teenager. He's performed on cruise ships, late-night talk shows, and at the Magic Castle. But 2020 left his highly skilled hands suddenly idle.

"All my gigs went away, and I was at home way too often," he explained.

So he did something he enjoys. Buss picked up his tools and built a treehouse for his 8-year-old son Demetri, posting pictures of the finished product on Facebook. He had no idea he was planting a seed.

"His second grade teacher actually asked if I could build her son a treehouse," Buss recalled. "I said, 'yes' even though I didn't really know what I was doing."

More pictures led to more inquiries, and soon Eric Buss Treehouses were sprouting up all over Burbank and beyond.

"And I've been busy since July," he said, "building treehouses and playhouses nonstop without a break."

He acts like this just happened, but Buss laid the foundation himself. Looking to replace some of his lost income, he went out on a limb and asked his social media circle if anyone had any odd jobs or small projects they might consider hiring him for.

He's certainly done some of those jobs but admits, treehouses are much more fun, and he's glad to spend a bulk of his time closer to nature.

One day, when he arrived home, Buss said his son greeted him.

Each house takes roughly a week to complete, but it's what happens next that truly inspires him. Buss knows he isn't building a wooden box. He's creating an experience, a place that will become a fixture in someone's childhood memories, and he wants to make it as whimsical as he can for them, with secret hiding places and, of course, a bucket on a rope.

"I want it to be a fun kind of place where they can get off the internet and come just sit in a tree and get dirty," he explained.

Yes, he misses performing and plans to return to his magic roots as soon as possible, so he takes special care not to hurt his hands as he works with power tools.

"Knock on wood," he said, actually knocking on the wood that surrounded him. "I haven't been injured."

But even when his gigs reappear, he wants to keep building. It will be tricky juggling the two careers, but he's determined to find a way to make it work.

"Another one of my friends said, 'You're filling your soul," Buss said. "You know, I don't like the reason it happened, but, yeah, it's been a pretty fun side career, and it kind of taught me that I can be happy doing things other than magic, which for years I would not have thought that."

It's been a pandemic pivot, sprouted from necessity, that, in the end, filled his bucket in ways he never expected.