Manuel Martinez, 27, and his daughter Leah, 4, wait for a bus in Brownsville, Texas. They're one of an increasing number of families that is being processed at the border instead of expelled under a public health order. (Spectrum News/Sabra Ayres)

At the Border, More Migrant Families, Adults Are Being Released into the US

BROWNSVILLE, Texas — Exhaustion has formed a glaze over Manuel Martinez’s eyes as he slowly peels a clementine orange and hands it to his four-year-old daughter. It’s been 28 days since either of them have had a good night’s sleep or a full meal.

But as he sat on a plastic folding chair in a waiting area created for migrants outside of the Brownsville, Texas, bus terminal, he said he’s calm — and mostly relieved.

“I’m very happy,” he said as he tried to get his daughter, Leah Martinez, to focus on eating the orange slices instead of playing with another child. “I want to have a better life for her. I want her to be safe.”

Martinez, 27, is one of a growing number of adults who have crossed the border with their children in recent weeks and then been processed by Border Patrol, given a court date for their asylum case and released into the country.

Last month, more than 11,000 families and another 7,000 single adults were processed by U.S. Customs and Border Protection instead of being turned away under the public health order in place since last March, according to data posted by CBP.

While the majority of adults and families, many with young children, are still being expelled immediately — including more than 70,000 last month — the uptick in adults being processed contradicts the administration’s message that the U.S. is only admitting kids who arrive alone.

“The adults are being sent back,” President Joe Biden said in an interview with ABC News this week.

The numbers increased from January, especially for families, when border officers admitted about 37% of those who crossed. In February, that number was nearly 60%.

The majority intend to make a claim of credible fear under the asylum system. Some are placed in immigration proceedings right away, and most are given a later date to report back to authorities.

For single adults, a spokesperson for CBP explained that they might be processed if they have a criminal history or have crossed the border before, meaning they are deported later on. It's unclear if a significant number were released into the U.S. last month.

In a hearing Wednesday, Republican lawmakers on the House Homeland Security Committee asked DHS Secretary Alejandro Mayorkas more than once how many migrants had been released into the United States. He didn’t give a number but promised to submit the data to the committee later on.

Mayorkas instead explained that adults who cross with children would only be processed in the U.S. if Mexico couldn’t take them.

“Families apprehended at the border are also immediately expelled ... unless we confront a limitation on Mexico's capacity to receive them,” the DHS secretary said.

In conversations with those working on the border, some said the rise in processing may be at least partly an effort to aid more young children, along with their parents.

“We also understand them to be exercising some discretion for humanitarian reasons,” said Lee Gelernt, deputy director of the Immigrants’ Rights Project at the American Civil Liberties Union. “But precisely what the criteria is — or how often that occurs — is unknown.”

Martinez left Honduras with his daughter nearly six weeks ago to make the arduous trek to the U.S.

He said he came not because he had heard that the new president would let him in, but because he had collected enough money to leave and escape from the gangs threatening his family.

Maras, a term for Honduran street gangs, exploit people in Martinez’s city of Morazan almost daily. Martinez, who was raising his daughter by himself, got biweekly visits from the maras demanding 3,000 lempira, or about $120 USD. Those who don’t pay — and Martinez said he could rarely afford to — are beaten and sometimes killed by the maras.

So, on February 4, he packed a small backpack, his daughter and the money he had collected. They traveled in the back of a trailer truck for days. Sometimes Martinez walked with his daughter. Sometimes they took a bus. Once they were separated among other families that joined the group. 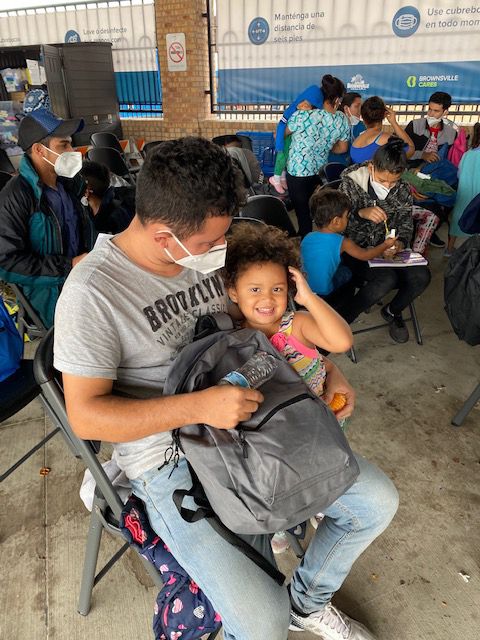 Martinez said that he and his daughter spent three days in Border Patrol custody before they were released in Brownsville, Texas on March 16. (Spectrum News/Sabra Ayres)

In Matamoros, Mexico, he found a smuggler whom he paid to get him and Leah over the Rio Grande to Texas, where he turned himself in to U.S. Customs and Border Protection officers.

They spent three days in Border Patrol custody, he said, before being released on March 16 with an order to report to immigration authorities on the date they would hear his asylum case.

But Manuel and Leah are still in the minority of border crossers, most of whom are expelled right away under the public health order, Title 42, which the Trump administration put in place last March.

Among those who are processed by CBP, a small number are turned over to Immigration and Customs Enforcement (ICE) for deportation, including 1,115 removed last month according to data provided to Spectrum News.

Advocates say the government has the capacity to take in more families, and the ACLU paused a lawsuit challenging Title 42 to make way for negotiations over the border restrictions.

“If at the end of the negotiation period, the government has neither ended Title 42 nor significantly reduced the number of families it is subjecting to Title 42, then we will be back in court” Gelernt said.

A group of Republican lawmakers visited the border near El Paso this week, blaming the Biden administration for the dangerous journey many migrant children were making on their own.

“This is a human heartbreak,” Minority Leader Kevin McCarthy (R-CA) said. “All because the policies of our president [have] changed and told them something different — told them to risk their lives.”

At the bus terminal, Martinez and his daughter were tested for COVID-19 by Team Brownsville, a volunteer organization that set up a help station for migrants outside the bus bays. 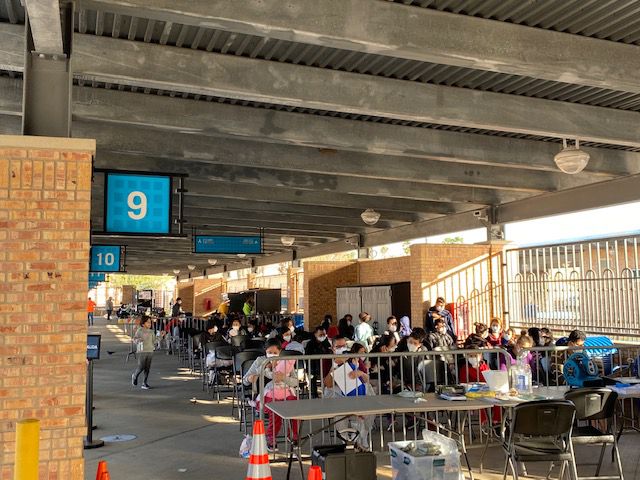 The bus terminal in Brownsville, Texas, often the first stop for families who are processed by border agents and then released. (Spectrum News/Sabra Ayres)

Migrants who test positive go to hotels to quarantine, where volunteers bring them meals and medical aid.

Those who test negative, like Martinez, make travel plans. He had a bus ticket to New Orleans, where he had friends who had agreed to take him and Leah in.

“I want her to go to school and to be safe,” he said. “I did this for her. I don’t want her to grow up in fear like we had in Honduras.”

Team Brownsville volunteers said that in the past month, they are seeing hundreds of more families like The Martinezes coming through the bus station, which is typically their first stop after being released by Border Patrol.

The numbers aren’t as big as they saw in 2019, but they are noticeably larger this year, said Sergio Cordova, one of the founders of Team Brownsville. Calling the current surge a crisis isn’t accurate, however, he said.

“A crisis is when people don’t have access to the asylum process,” Cordova said. 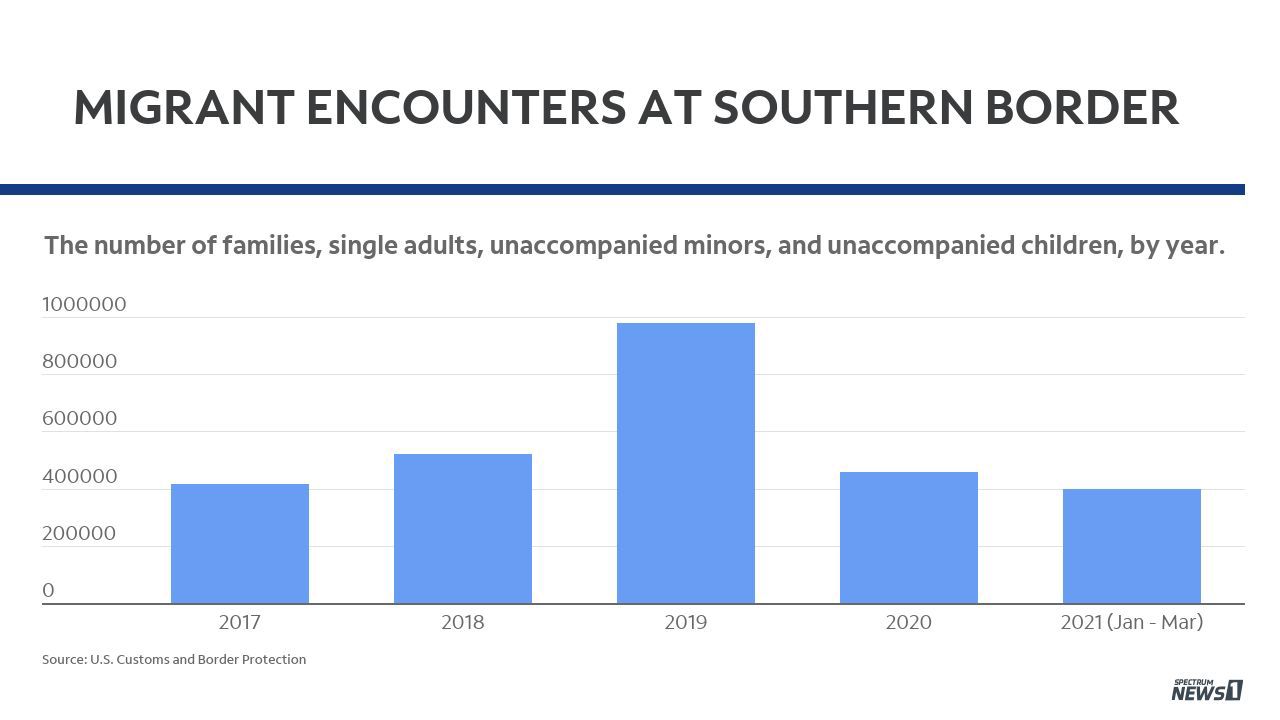 Under current law, asylum is a legal claim that can only be made once a migrant reaches the U.S.

Administration officials have said in recent weeks that they plan to reform the system to be more like refugee admissions, where people apply in their home countries instead.

“We’re going to make sure we have facilities in those cities and towns run by DHS … to say you can apply for asylum from where you are right now. Make your case,” President Biden told ABC this week.

As a longer term solution, the administration plans to invest funding in the Central American countries where the majority of migrants come from, in an effort to minimize the “push” factor that sends thousands to the border each month.

For now, the administration says people should wait until the new processes are up and running instead of choosing the often-dangerous journey to the U.S.

“I can say quite clearly: Don’t come over,” the president said.

Austin Landis reported from Washington, D.C. This story has been updated to reflect a new number of single adults processed by CBP in February.