In this Jan. 6, 2021, file photo rioters break into the Capitol in Washington. (AP Photo/John Minchillo, File)

DALLAS COUNTY, Texas — A Dallas County, Texas, man who took part in the January 6 riot at the U.S. Capitol, documented it on social media, and sent a threatening tweet calling for the assassination of Rep. Alexandria Ocasio-Cortez, D-New York, has been taken into custody and is facing federal charges.

According to the criminal complaint, 34-year-old Garret Miller, who is in federal custody, posted a video to Twitter that shows him inside the Capitol building when the deadly storming took place.

The complaint states Miller posted several times on Facebook, further corroborating his participation in the riot. One post, a selfie, shows him in a red “2020 Trump” hat. He appears to be in a grassy area. 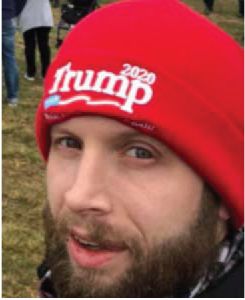 Garrett Miller appears near the U.S. Capitol on January 6, 2021. (Source: United States District Court for the District of Columbia)

A January 11 post shows Miller posing with another Trump supporter in the Capitol Rotunda. 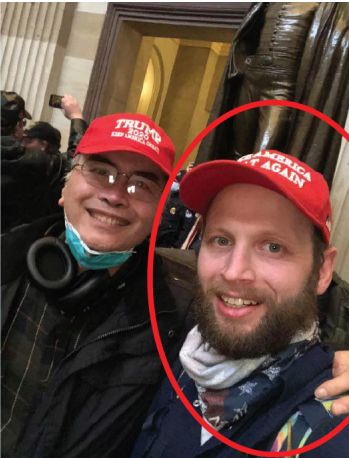 Garret Miller, right, poses with another Trump supporter in the U.S. Capitol Rotunda in this image from January 6, 2021. (Source: United States District Court for the District of Columbia)

Surveillance video from inside the Capitol appears to depict Miller among the mob.

On January 6, Ocasio-Cortez, following the violent events at the Capitol, tweeted “Impeach” in reference to President Donald Trump. Garret initially replied “We acted with honor and where [sic] not armed. We where [sic] gentle with the police. They murdered a child.” 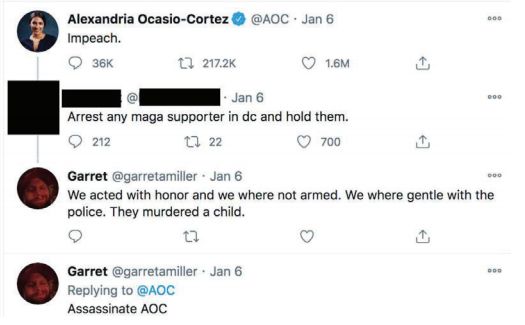 Miller is charged with knowingly entering and remaining in restricted buildings without lawful authority, disorderly conduct on Capitol grounds, obstructing and impeding an official proceeding, and performing acts of civil disorder.

Miller is among about 120 people facing federal charges in connection to the Capitol riot, several of whom are from Texas.