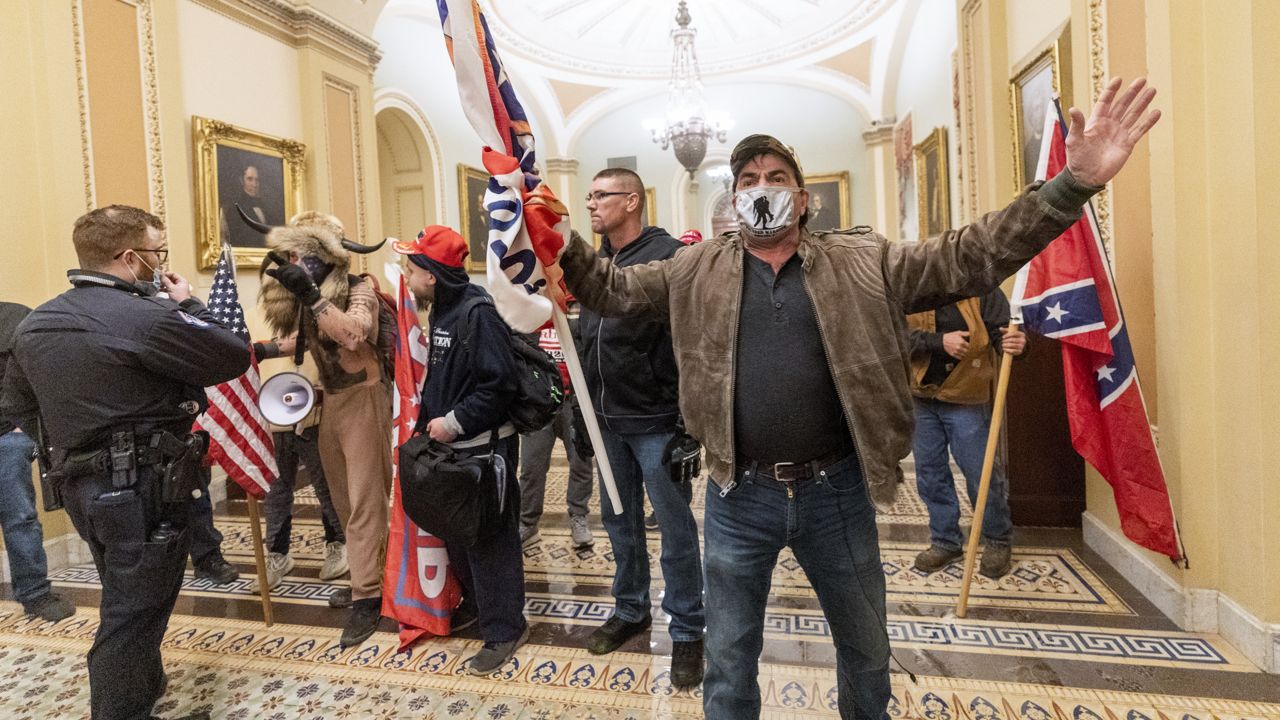 In this Jan. 6, 2021, file photo, supporters of President Donald Trump are confronted by U.S. Capitol Police officers outside the Senate Chamber inside the Capitol in Washington. Both within and outside the walls of the Capitol, banners and symbols of white supremacy and anti-government extremism were displayed as an insurrectionist mob swarmed the U.S. Capitol. (AP Photo/Manuel Balce Ceneta, File)

WASHINGTON, D.C. — Following the deadly uprising on Capitol Hill, members of Congress have lined up to denounce the violence and right-wing extremism as anti-American.

But what if, as Western States Center Executive Director Eric Ward suggests, the deadly insurrection led by a group of mostly White men — some waving Confederate battle flags — is more instructive about the nation's past than many care to admit.

"The reality is, for immigrants, Black, indigenous and other people of color, the racialized violence that now White people are experiencing at the hands of this authoritarian movement known as the alt-right or White nationalism has been experienced for nearly 75 years. There has been a 75 year backlash to the victories of the civil rights movement, the aspiration that everyone can live, love, worship and work free from bigotry," said Ward.

"That movement has grown over the decades from the margins to the mainstream. It believes it is a political minority, which is not true. It believes it is a demographic minority, which is not true and White nationalist leadership and elected officials who have figured out that they can benefit from that anxiety have sought to exploit those fears ever since," said Ward.

University of Kentucky History professor Nikki Brown believes the second impeachment of President Donald Trump for inciting the insurrection was warranted. She maintains there needs to be accountability so that history doesn't continue to repeat itself. Trump has denounced the mob violence but in the weeks prior told the neo-fascist Proud Boys to "stand back and stand by."

"When people say this is not who we are, my first thought is well, who is the we in this? And my second thought is, this is exactly who America is because lynch mobs go back 200 years in American history, if not more, and the United States flirted with fascism itself in the 1920’s and 1930’s," said Brown.

"We, and that’s all American children, are taught a narrative about how the United States is exceptional, how the United States has had this experiment with democracy and that American democracy is now a beacon of stability and continuity around the world but when you think about the United States differently, a country that has never held people participating in lynch mobs accountable or has not found a way to hold former treasonous states, known as the Confederacy, fully accountable, then this latest moment makes much more sense," added Brown.

Though political and racialized violence is very much a part of the American story, Ward says he's hopeful America is moving towards a more inclusive democracy.

"The majority of White Americans are slowly understanding that their destiny is entwined with a multiracial democracy. That is why today, more White people by percentage, are supportive of Black Lives Matter than were supportive of Martin Luther King Jr. in his lifetime," Ward said.