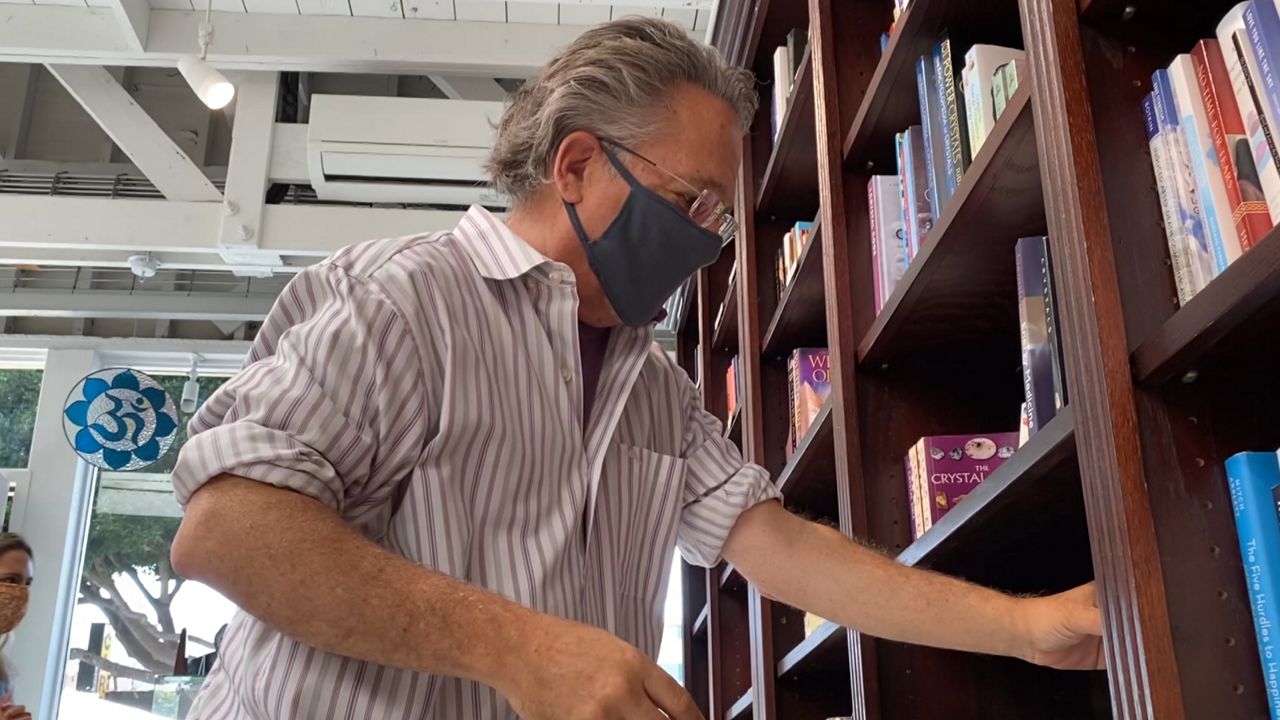 SANTA MONICA, Calif. — The pandemic continues to wreak havoc on small businesses as many are forced to temporarily or permanently close. It’s a problem playing out in the Main Street shopping district, where more and more empty storefronts are popping up. But Jeffrey Segal, owner of Mystic Journey Bookstore, isn’t worried.

“When we opened in October of 2008, it was basically the moment of the crash, of the great recession and there was never any doubt in my mind that it was the right thing to do at that time,” Segal said.

He says that’s because his store provides what people crave during a time of need including books on spirituality, self-help and religion along with healing crystals and tarot cards. Segal’s store was located on Abbot Kinney Boulevard for 12 years before he moved to Main St. in Santa Monica, an area known for small, independent businesses. He opened the doors two weeks ago, in the middle of the pandemic but Segal has seen a steady stream of customers.

“They’re looking for something to help them get through this period, to give them strength, whether it’s mental strength or healing or all sorts of different things that are going on and so it’s really almost no different than when we were in 2008,” Segal said.

Segal believes people are ready to get out of their homes and shop again. He sees diners exploring and walking around after eating outdoors but there aren’t a lot of retail stores open to visit. The Main Street Business Improvement Association reports about 25 percent of commercial space is vacant. “Main Street Santa Monica is kind of like a microcosm of Main Street, USA,” said Hunter Hall, the association’s executive director. “I think that if we don’t proceed carefully, neighborhoods like this could potentially just radically change, right? Nobody wants to envision a Main Street with nothing but Cheesecake Factories, right?”

With the closure of several businesses in recent months, including Muji, ZJ Boarding House and Coffee Bean, Hall says in the long term, there needs to be a sort of reconciliation from property owners when it comes to the amount of money charged for commercial space along Main St. “We need them to come to the table with a lot of their tenants and the community to really figure out some creative ways that they can keep tenants in buildings rather than have vacancies and encourage new tenants,” Hall said.

Within the next year, he says he could see landlords trying to incentivize new businesses to fill commercial space, especially 'anchor tenants' which are prominent, prime businesses intended to help draw customers. “That’s going to attract other businesses, who can, you know, the property owner can make up the rent that way,” Hall said.

As for Segal, given that he’s opened his store during two economic crises, he predicts a resurgence of business in the area. “With the restaurants in the street, which I believe will stay there on a permanent basis and people looking for places to go that aren’t inside, that have a nice vibe, I think actually think that Main Street is going to see a rebirth,” Segal said.

In fact, Main Street Business Improvement Association reports several new businesses have recently signed leases and four to five new establishments could open by the end of this year.